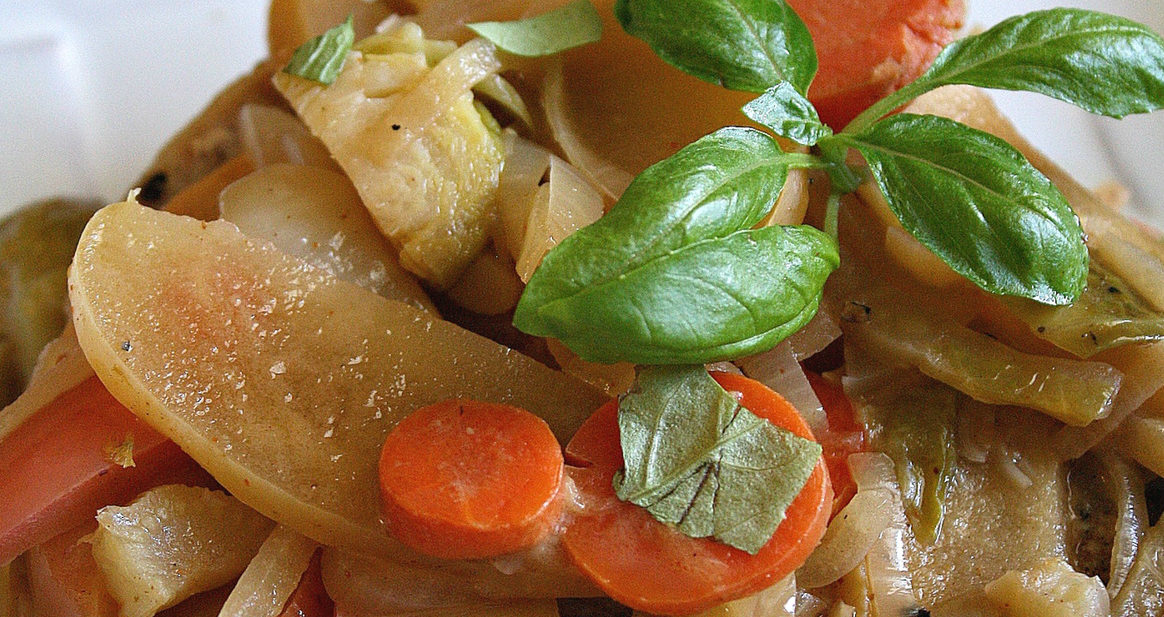 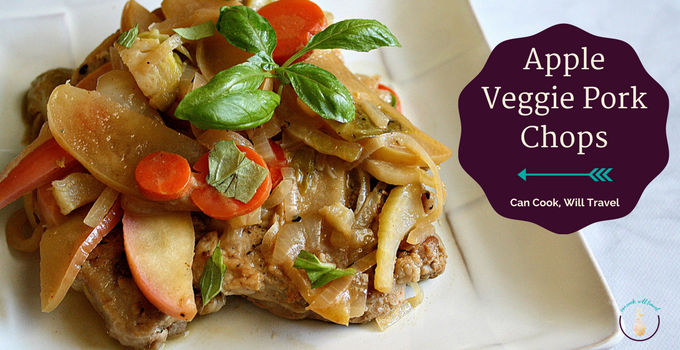 (These Apple Veggie Pork Chops are inspired by a recipe from Gimme Some Oven, so check that out here.)
Step by Step Instructions: 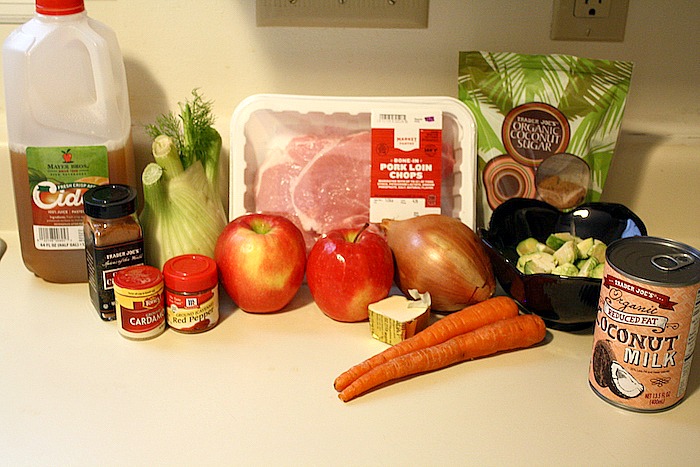 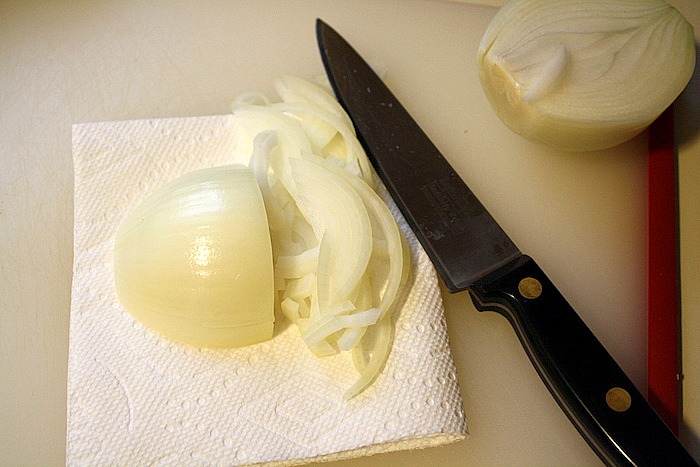 Get started on the Apple Veggie Pork Chops by chopping all of your veggies, so begin by cutting your onion in half and thinly slicing it. 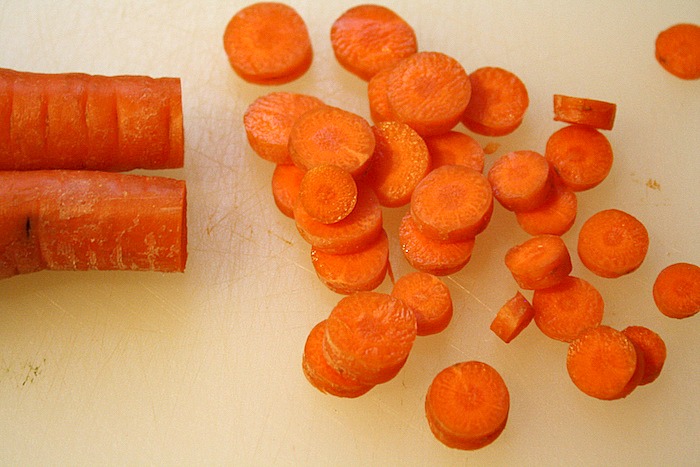 Then thinly slice 2 carrots, and I didn’t peel mine and just washed them really well. 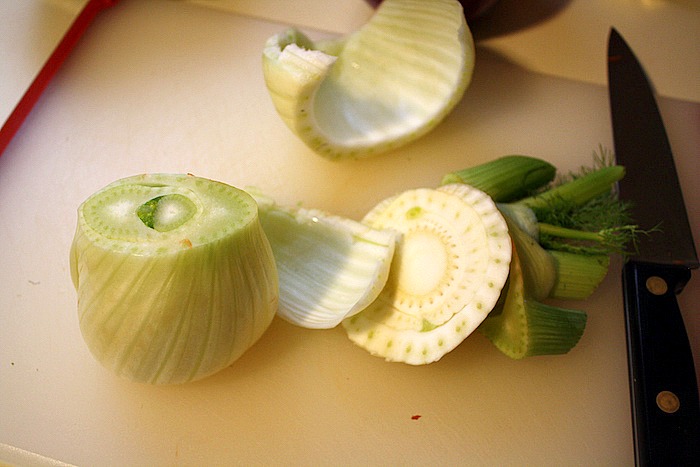 Now cut off the top and and bottom of the fennel and remove the outside layer. 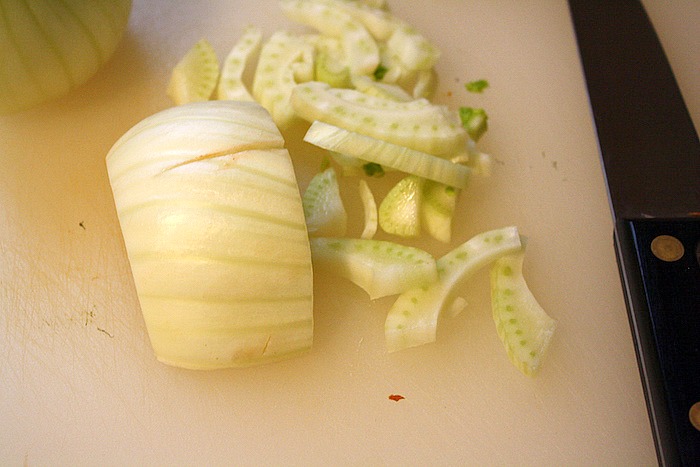 Then cut the fennel in half and thinly slice each half. 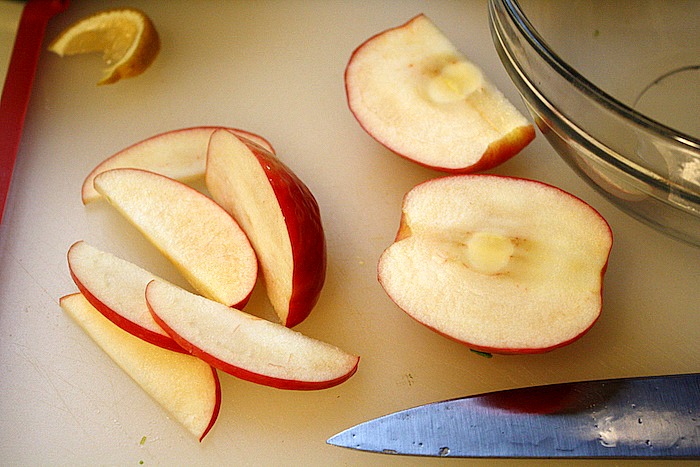 Finally remove the core and thinly slice your apples, and then toss them with a little lemon juice to keep them from browning. 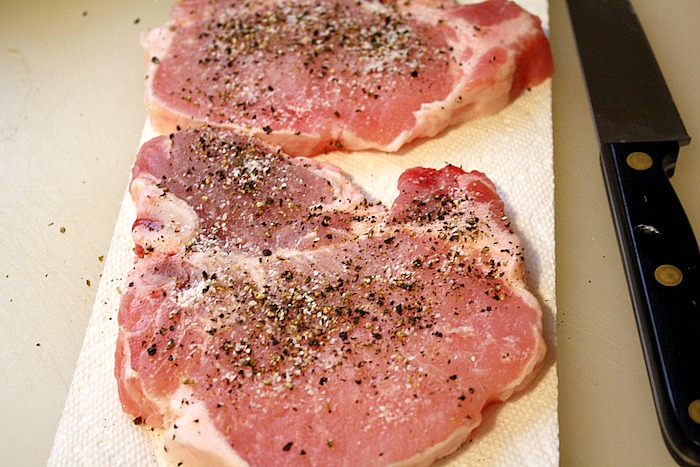 Season one side of the chops really well with salt and pepper, and then heat a large pan over medium-high heat. 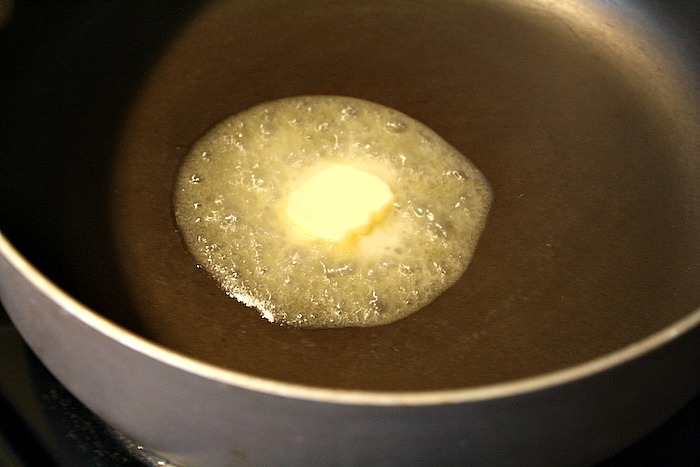 Add one tablespoon of vegan butter to the pan, while the pan is hot. 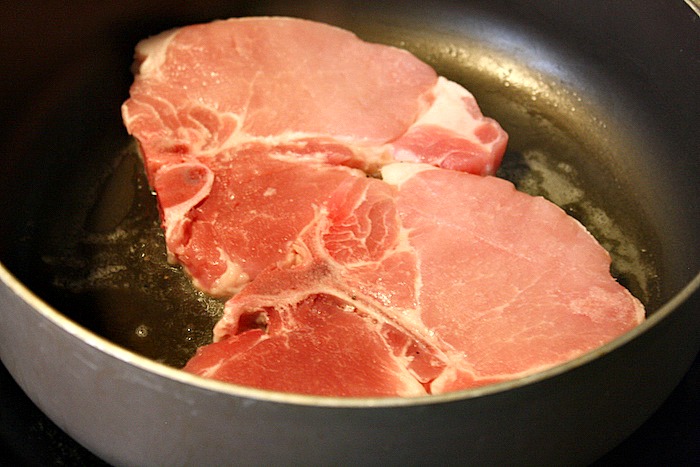 Then place the chops seasoned side down. 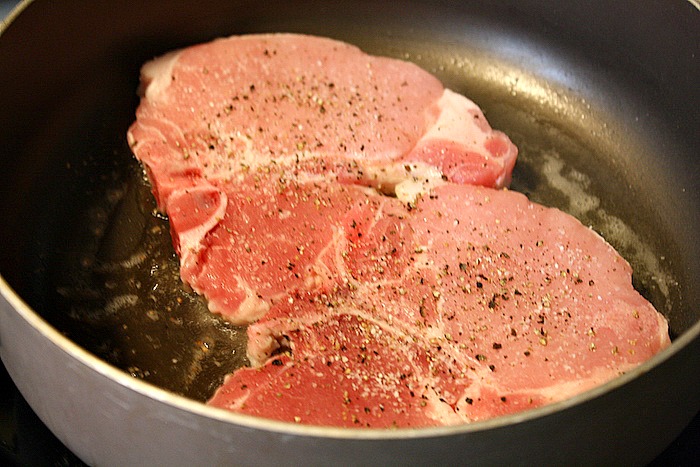 Now season the other side with salt and pepper, and then cook for 3-5 minutes on each side or until they’re browned. 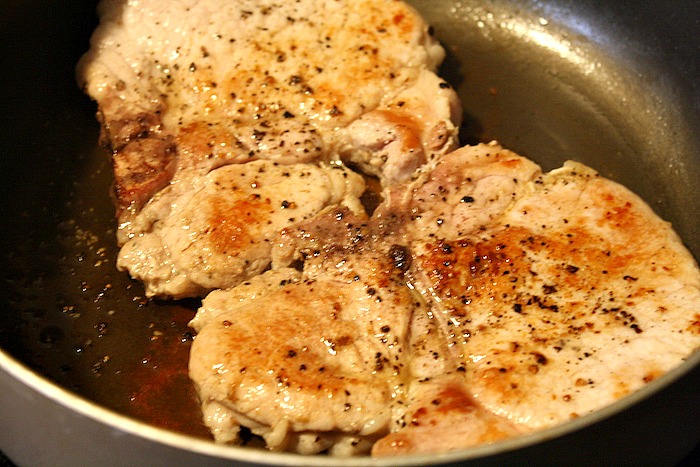 Here’s how brown mine got, but you could always let them brown a bit more. 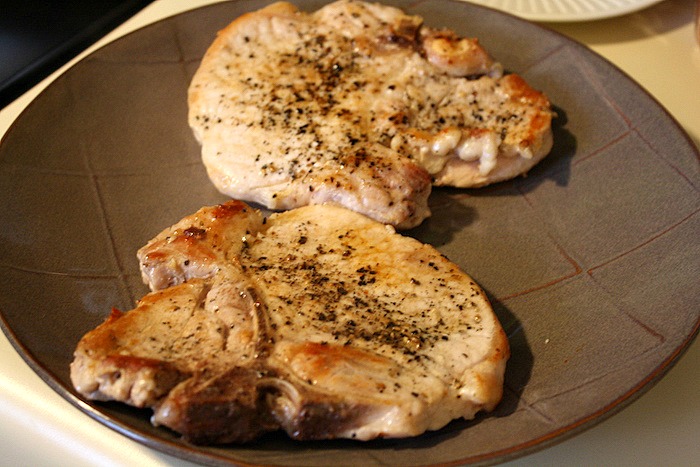 Once the chops are cooked, then transfer them to a plate. 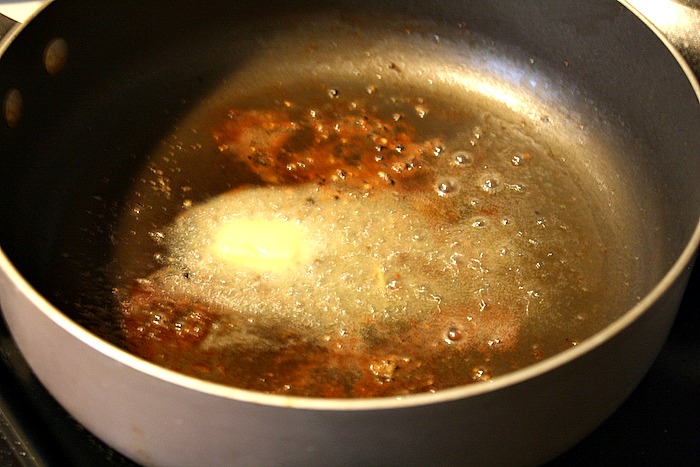 Now add another tablespoon of butter to the hot pan over medium-high heat. 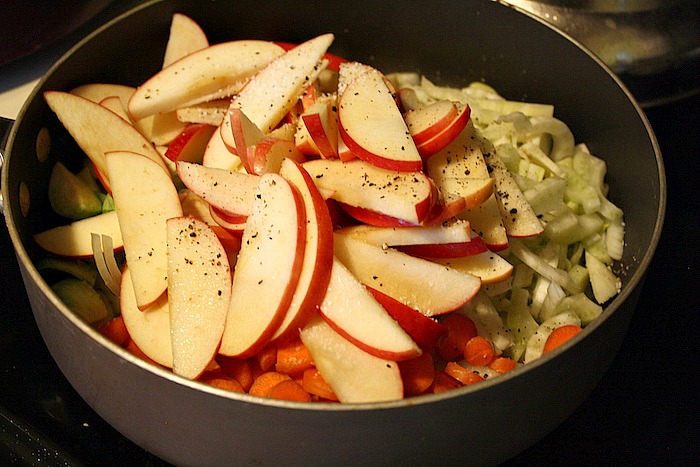 Now add all of the chopped veggies and apples to the pan and season with a little salt and pepper. 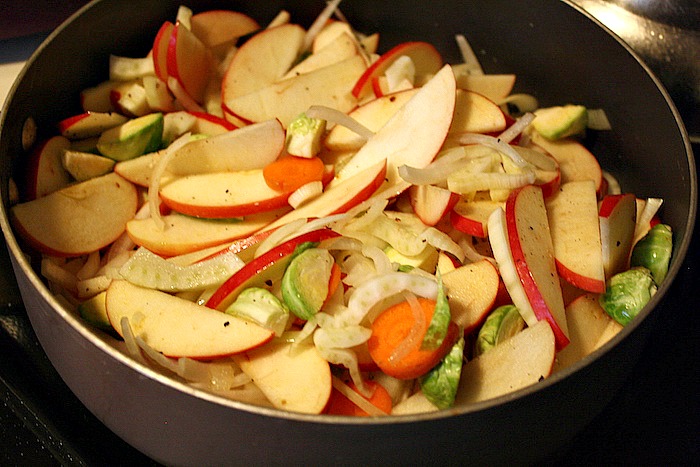 Then use tongs and toss the veggies and continue to cook for 5-7 minutes or until the veggies are cooked through. 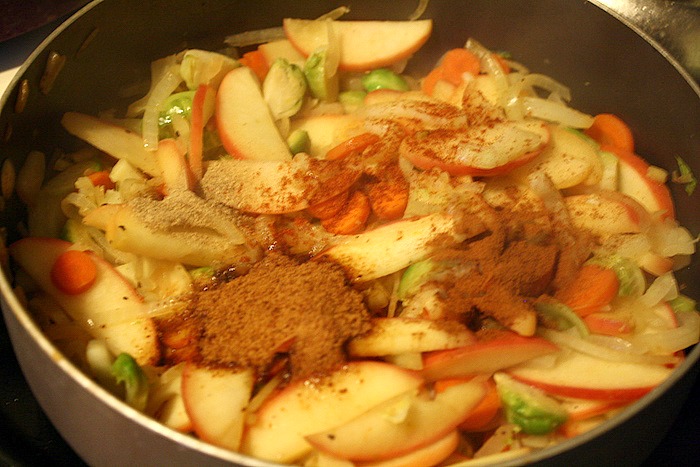 Now let’s add some flavor to these Apple Veggie Pork Chops in the form of 2 tablespoons of coconut sugar, 1/4 teaspoon of cayenne, and then 1 teaspoon each of cinnamon and cardamom and toss well. 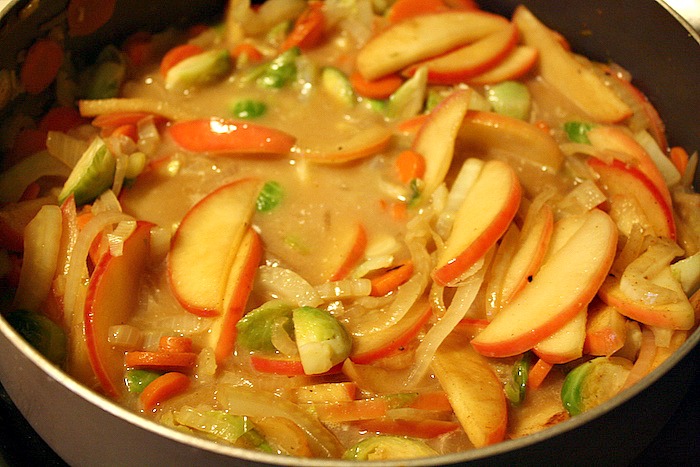 Then add about 1 cup of cider and 1/2 cup of coconut milk or enough liquid that the chops will be able to sit in the liquids. 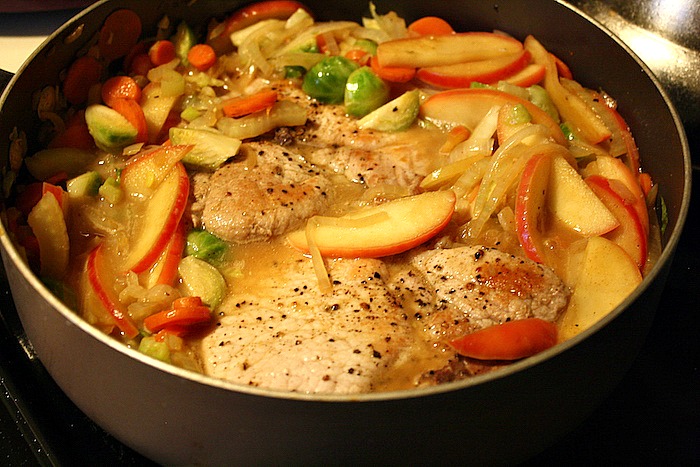 Then add the chops to the pan so they submerge a bit, and let them cook 3-6 minutes. You’ll want to check the internal temp so the pork is 145 degrees for a pink color and then up to 165 if you want it well cooked. I opted for 150 degrees, and it was perfect! These Apple Veggie Pork Chops are going to be a total hit, so eat them right away and happy pork cooking! 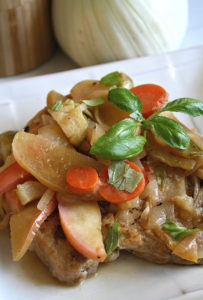