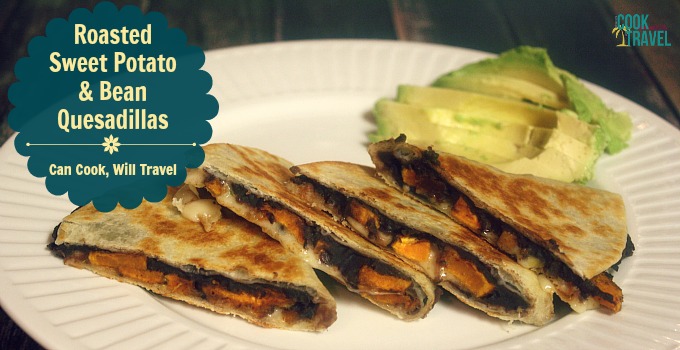 Let me start off by apologizing. I only now realized that I haven’t given you a quality quesadilla recipe since year 1 of my blog (!!!). Seriously?? Almost 5 years . . . a tragedy! So my sincerest of apologies. It’s time to right this wrong ASAP, and what better way to do it with a stellar Roasted Sweet Potato and Bean Quesadilla dish. Thanks to Pinterest for yet another bit of inspiration. This Roasted Sweet Potato and Bean Quesadillas dish comes from Kelly (great name, btw!) over at the blog The Pretty Bee. Now Kelly has some dietary allergies that she has to work with, so definitely go check out her site if you want to cook killer food but have major food restrictions. Since I don’t, I made a few minor changes but the recipe really stayed in tact.

The part of the dish that takes the longest is roasting the sweet potatoes, as you may have guessed from the name of this post. But it’s so simple. All you do is peel and slice up the potatoes and then roast with some olive oil, cumin, and sea salt for about 40 minutes. Once they’re tender, you’ll have dinner on the table in under 10 minutes. Score! And wow can roasting veggies majorly maximize the flavors.

When the potatoes are roasted and smelling fabulous, remove them from the oven and start heating a non-stick skillet. I made a few changes here. I decided not to use a spread or butter. Instead I sprayed the skillet liberally with cooking spray (I went with an olive oil spray). Then I used regular flour tortillas. The recipe also calls for refried beans. I was a bit torn at the grocery store, but I ended up going for the black bean refried beans and it was an AMAZING choice!

While the skillet heats, I covered half of my tortilla with refried beans. Then put it in the pan. I topped the beans with a layer of sweet potatoes followed by a layer of pepper jack cheese. Fold over the tortilla and heat each side until it’s golden brown. It had been so long, I’d forgotten what a cinch it was to whip up quesadillas. And I loved the use of the cooking spray instead of butter to lighten up the recipe a bit. Plus the spray helped give a nice crust to the tortillas, which was a great compliment to the texture of the soft filling.

The flavors are fabulous too. You have a slight sweetness from the potatoes, spice of the cumin, a nice savory flavor from the black beans, and a bit of heat from the pepper jack cheese that were lovely. Yum!

As far as serving goes, I served my Roasted Sweet Potato and Bean Quesadillas with some sliced avocado. A bit of sour cream to dip them in would be great. And I think the avocado lime cream I made for the chicken taquitos recipe last Fall would be crazy good with these quesadillas. The freshness from the avocados really helps cut the richness of the potatoes and beans.

Finally if you have any leftover potatoes, beans, and tortillas, then you’re in luck! The leftovers are just as great! I warmed the potatoes and beans about 30 seconds in the microwave to take the chill off. Then I made the quesadillas as normal, and they were just as good the second time (and third).

Next time you need a quick, meatless dinner, then this Roasted Sweet Potato and Bean Quesadillas recipe is perfect! Be sure to click the link for the recipe and step by step instructions. Happy quesadilla-making!

A look back:
One year ago: Southwest Fajita Chicken Wraps . . . That’s a Wrap!
Two years ago: Spicy Pasta with Sweet Potatoes . . . So Freaking Good!
Three years ago: Get Your Dip On! . . . Lightened Jalapeño Popper Dip
Four years ago: Shrimp Penne Bake . . . It’s Lighter Than You Think!
Five years ago: Mixin’ It Up with My Rice Cooker