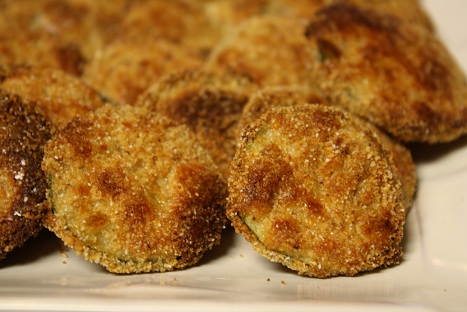 You are here: Home / Blog / Appetizers / Baked Not Fried

So this week as I was deciding what I wanted to cook, I found myself drawn to three recipes that all had one thing in common…they were all baked in the oven. Not only that, these recipes were really simple to make and tasty.

I’m a self-professed vegetable lover, but I know many of you are not or else have family members you cook for that are picky eaters. I loved these recipes because they were a great way to add some variety to cooking vegetables and they are fun to make. Okay, I know these aren’t veggies, but I thought they would be a fun way to kick off my cooking week. I haven’t dried fruit in the oven before, so I thought, why not?! This concept comes from The World Wide Gourmet site and was ridiculously easy.

So far I have just snacked away on these strawberries and have made a couple of batches. After baking them twice, I kept thinking how great they would be on a leaf salad (with goat cheese and balsamic vinaigrette of course) but I have yet to allow them to sit long enough for me to actually make said salad. 😉

Click here for the simple step by step instructions and recipe for these dried strawberries. I love cauliflower and did a cauliflower week a while back. It seemed like a great idea to see how this recipe worked. First off, this is again a very easy dish and it’s a Weight Watchers recipe, that is zero points for all of you WW followers. Just cut up the cauliflower and mix in the seasonings and bake for ten minutes. That’s it.

These poppers are spicy since they are seasoned with chili powder (where the spice comes from in this case) and cumin (to give a bit of depth of flavor). Now let me say that the combo of cauliflower and cumin are such a fabulous combination, which I knew already from when I made a one-pot Curried Cauliflower Rice that was delightful!

For a way to spice up every day cauliflower, you’ll want to click here for the recipe and step by step instructions. I love zucchini a lot and so far have done two zucchini weeks on my blog, so I was excited to try out this recipe and see how it went. This was by far my favorite recipe of the week. The coating on the chips created a surprisingly crispy crust and I could have gobbled these all up.

Let’s talk about the coating a bit. First the zucchini slices were dipped in a mixture of milk, whole wheat flour, and apple cider vinegar. Then they are dipped in a bread crumb, parmesan cheese, and pepper mixture. Then the chips are baked, and they were nice and crispy as if they were fried, but they weren’t! Gotta love that.

This recipe is definitely one that you should try. I think it would be great as well to add a bit of red pepper to bread crumbs. Also, the original site (The Naked Kitchen) mentions that these do not re-heat well, but I found that when I heated my broiler on my oven to Hi and re-heated the zucchini chips for a couple of minutes, they tasted almost as good as the first time around. Yum!!

Click here to try out this recipe and check out the step by step instructions and nutrition information.

What I was cooking up a year ago: Time to Make Gazpacho!

This time a year ago was a fun week where I tried out two different gazpacho recipes. They were both delightful – one was creamy and one was chunky and full of veggies. I am still not sure which one I liked more, because they were both so good!