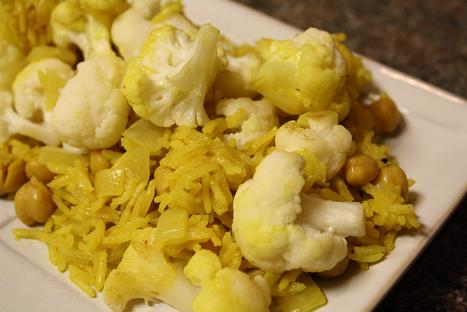 (Recipe can be found on Martha Stewart’s site here.) I began by preheating the oven to 400 degrees. Then I drained the chick peas, rinsed them well, and set them aside while I moved onto the cauliflower. I understand that cutting a head of cauliflower for the first time can be a bit intimidating, so I thought I’d walk you through the process in case you haven’t done it before. I used a sharp knife and cut the core out of the cauliflower as you can see above. I found it easiest to next begin pulling apart the cauliflower into large pieces as seen on the cutting board above. Then using a knife, I worked through each piece of cauliflower until I had small, bite-sized pieces of cauliflower that were about an inch and a half long. Once the cauliflower was cut up, I diced the yellow onion. It was then time to start putting together the dish. I began by heating 2 teaspoons of canola oil in a Dutch oven over medium heat. To the warm oil, I added the chopped cauliflower and sauteed it in the oil for several minutes, stirring regularly. To the Dutch Oven, add another 2 teaspoons of canola oil and the diced onions. Sauté the onions for a few minutes until they are translucent. Once the onions are cooked, add 2 cups of Basmati rice, the can of rinsed and drained chick peas, salt and pepper, and 4 teaspoons of curry. Stir the mixture for about 2 minutes until the rice is well coated. To the rice mixture, add 2 3/4 cups of low-sodium chicken broth and 1/2 cup of heavy cream. Stir the broth and cream into the rice and bring it to a boil. Sprinkle the cauliflower over the top of the rice mixture and be sure not to stir it together so that the cauliflower can steam while baking. Put the lid on the Dutch Oven and bake in the oven for 15 minutes. Remove the dish from the oven after baking and let it sit with the lid on for an additional 10 minutes. After 10 minutes the rice will have absorbed all of the liquid and the cauliflower will have steamed until it’s tender. Spoon up the dish and serve. I ended up eating this with some rotisserie chicken and it was a delightful meal! Enjoy!! 2. In a Dutch oven or other heavy pot, heat 2 teaspoons oil over medium-high. Add cauliflower and cook, stirring frequently, until browned in spots. Transfer to a plate and season with salt and pepper.

4. Add rice, curry powder, and chickpeas and season with salt and pepper. Cook, stirring constantly, until rice is coated, about 2 minutes.

5. Add broth and cream and bring to a boil.

6. Scatter cauliflower over top (do not stir to combine). Cover and bake until rice is tender and liquid is absorbed, 15 minutes. Let cool 10 minutes before serving.