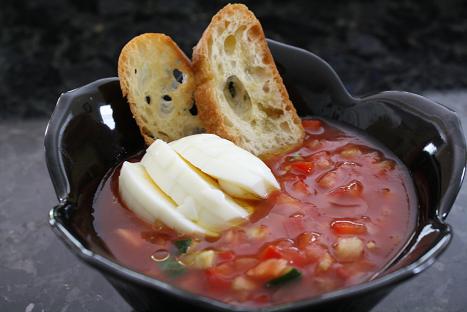 Several years ago, I remember my boss at the time walking over to my desk munching on his lunch. When I inquired what he was eating, he told me it was gazpacho. He also proudly proclaimed that he made it himself. Now I had never had gazpacho, but I’m pretty sure I had heard of it. He let me have a bite and it was such a different dish that I couldn’t stop thinking about it. I knew I had to make it a part of this journey and added it to my list.

So now the time has come to make gazpacho. Q: What is gazpacho anyway? A: It’s typically a cold tomato-based raw vegetable soup that comes from Spain. I thought that this would be a great time to make some gazpacho since Summer is coming soon and a wide selection of tomatoes will be abundant in no time. What I found in finding some gazpacho recipes to try out, is that you have two varieties…a chunky vegetable gazpacho or a creamy version of the soup. So I decided to try both out.

When perusing through my new Claire Robinson Cookbook, 5 Ingredient Fix, I found this Spanish Gazpacho recipe. I just love that she is able to make flavorful food with so few ingredients. This recipe was no let down in the flavor department.

If you’re a fan of garlic, you will love this recipe. You use a garlic-infused olive oil when making the gazpacho, and wow does it infuse the soup with that flavor. This is a creamy gazpacho recipe that has a base of almonds and bread. Using bread as a base for a soup was a new technique for me, and I was looking forward to trying this recipe. The idea is to soak the bread in water so that it becomes dough-like and then when you mix everything in the food processor, it forms into a creamy tomato soup.

I chose to top the soup with a diced hard-boiled egg and served it with some of the bread from the same baguette that I used in the soup. It really was a delicious and rich soup that is perfect for a summer day.

Click here for this cool soup recipe and step by step instructions.

To make a gazpacho that was most like my former manager’s, I needed to make one with chunks of vegetables in it. For the best gazpacho recipe, I wanted to see what America’s Test Kitchen had come up with. They are always a reliable source in perfecting recipes, so I was excited to find they had a gazpacho recipe of the chunky variety. This recipe was incredibly easy to make. It required that I finely chopped a bunch of vegetables and that was about it. Plus the recipe can be made in advance (at least 4 hours in advance), which makes it a great weeknight cooking option.

I have to say that when I tried this recipe, I was a happy girl. This gazpacho is such a perfect dish for the Summertime, and I cannot wait to make it for my friends and family. Again I topped my gazpacho with a hard-boiled egg and some toasted bread. Please make this when you have some ripe tomatoes on hand on a hot Summer day…you won’t be disappointed (unless you don’t like veggies, and then you might be)!

Click here for this recipe and step by step instructions.