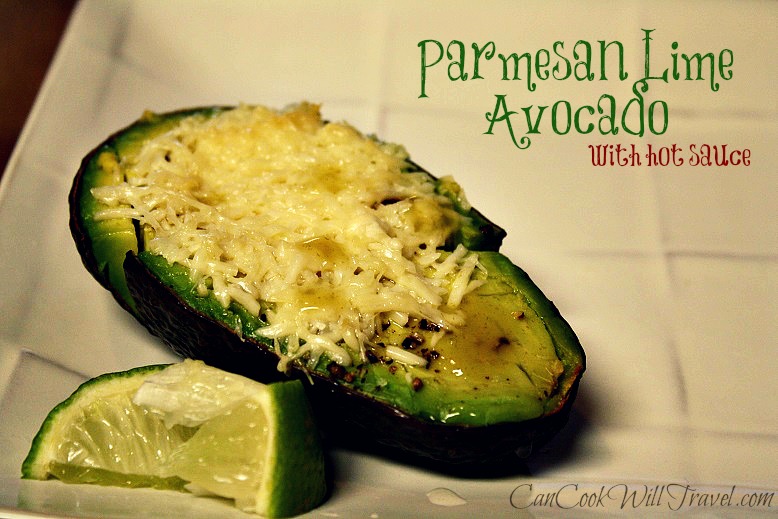 (Recipe can be found on the site Morsels & Musings here.)
Step by Step Instructions: Yummy Parmesan Lime Avocado can be on teh table in no time with the following items: Salt & Pepper, 1 Avocado, 1 Lime, Hot Sauce of your choice (I opted for Jalapeno Tabasco), and Shredded Parmesan Cheese. Begin by heating the oven to broil. Then cut the avocado in half and remove the pit. Pierce both halves with a fork and then use a knife to cut a cross-hatch pattern all over the top. Then add half a tablespoon of hot sauce to each avocado half. Next add half a tablespoon of lime juice to each half and season with salt and pepper. Take 1/8 cup of the shredded Parmesan cheese and add half of that to the holes of each avocado. Place the avocado halves against the rims of a lined baking sheet tray and broil on high for 2 minutes. Here is the cheese after 2 minutes and it’s melting. Add the remaining cheese to the two avocado halves and bake for an extra 2 minutes or until the cheese has melted. Serve it up right away with some lime halves and hot sauce. Enjoy!! Happy melting!

Preparation Instructions:
1. Begin by turning on the broiler in your oven.

3. Then add the hot sauce over the top of the avocado. Followed by adding the lime juice over the top and then season each half with salt and pepper.

4. Finally take half of the shredded Parmesan cheese and split it between the two avocado halves by placing it in the hole of each avocado.

5. Place the avocados on a lined baking tray with eges and broil them for 2 minutes. After 2 minutes top each half with the remaining cheese. Broil for an additional 2 minutes until the cheese is melted. Serve immediately with some lime wedges and extra hot sauce.