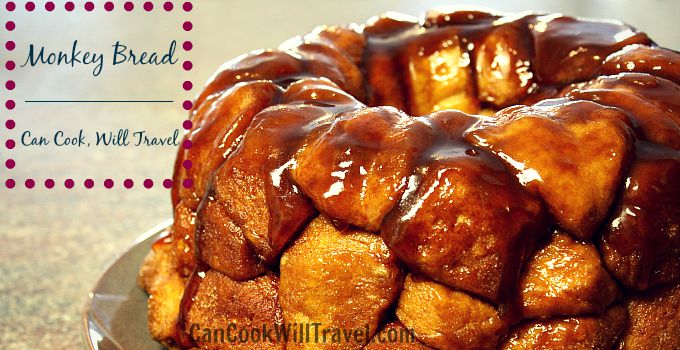 (Recipe can be found on the Pioneer Woman site here.) All that is needed for this decadent treat are the following: Cinnamon, Light Brown Sugar, 3 cans of non-flaky Buttermilk Biscuits, 2 sticks of Butter, and Granulated Sugar. Begin by preheating the oven to 350 degrees. One part of making this recipe that I particularly enjoyed was getting to cut the biscuits. I’m always looking for times to use my kitchen shears for fun purposes, and so I took to each biscuit with them. I began by opening all 3 cans of biscuits and pulling out the contents. Then I cut each biscuit into quarters as you can see above. Until all of the biscuits are quartered. In a gallon-sized plastic bag I combined 1 cup of sugar and about 3 teaspoons of cinnamon. I added the biscuits to the bag and sealed it. Then I tossed the contents around until the biscuits were evenly coated. Once the biscuit quarters were coated in cinnamon sugar, I filled my bundt pan with them. Then it was time to make the brown sugar butter. I melted 2 sticks of butter and added 1/2 cup of brown sugar. The two ingredients are then stirred together until they become one mixture and the sugar is dissolved. Once the butter/brown sugar mixture is finished, I poured it over the top of the biscuits. The smell at this point was already fabulous. I placed the bundt pan on a lined baking sheet with edges and baked it for 30-40 minutes. Bake the monkey bread until its crust is a deep, dark brown color. Once the bread is finished baking, remove it from the oven and let it sit for at least 10-15 minutes in the pan. You can see that my monkey bread really grew, and I was very glad I placed it on a lined sheet with all of the syrup that dripped out of it while baking. When the time came, I turned out the monkey bread onto a place and that was when I discovered the glaze that was created began to flow down the sides…so pretty! I immediately dug in as I couldn’t resist any longer. It was seriously amazing and was worth every extra sit up that followed! Make this ASAP and your loved ones will thank you…Enjoy!! Print
This Monkey Bread takes me back to one of my favorite memories of sleepovers as a kid. And it's as easy to make as it is delicious to eat!
Recipe type: Breakfast or Dessert
Cuisine: Sweets
Ingredients
Preparation Instructions
3.3.3077
2