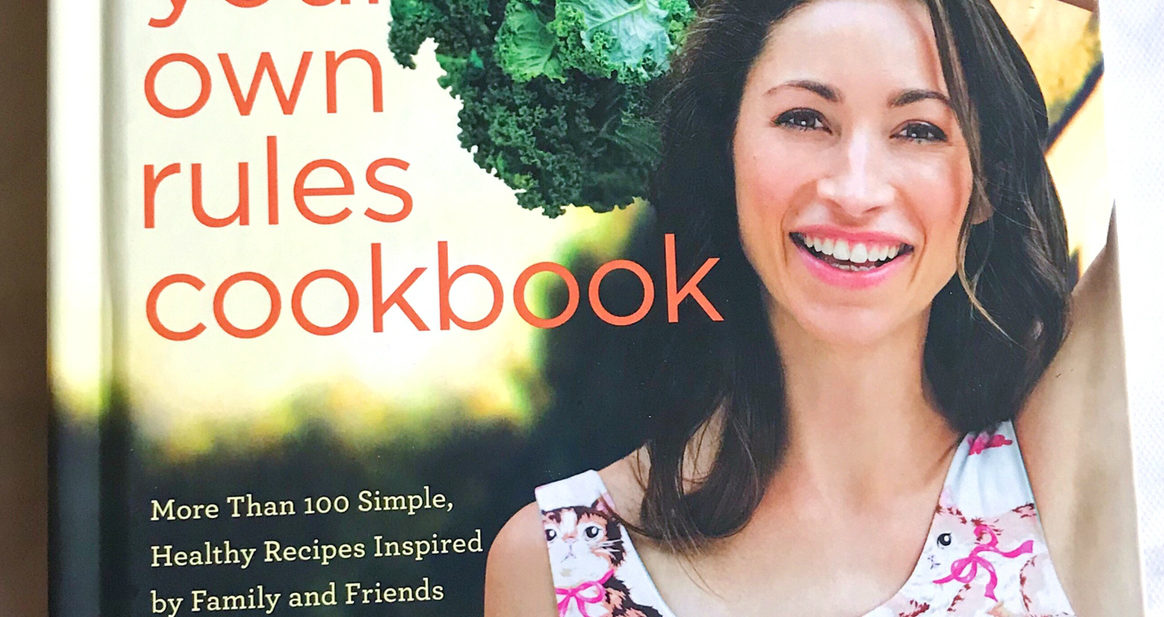 Happy New Year, my friend! It’s been a fairly relaxing holiday season for me, I must admit. I’ve spent the last week+ with my family in my hometown, where I’ve worked and relaxed and enjoyed some quality family time. I was looking forward to this Cookbook Love post in January, because I knew I’d have 1 or 2 new cookbooks added to my collection. Thanks to Christmas, I got two cookbooks, and I knew exactly which one I’d be featuring first: the Make Your Own Rules Cookbook by Tara Stiles. This is a book I gave my sister for Christmas 2015, and of course I flipped through it before I wrapped it for her. What I found was a book I knew I’d eventually need, because the principles in it are great. We’ll get to that more in a minute.

So when I made my Christmas list this year, I’m really glad that this book popped into my mind. I remembered how much I liked looking at it, so asking for it was a no brainer. My sister returned the favor and gave it to me for Christmas 2016. Gotta love that!

I knew if I got this cookbook, then I had to feature it in January. After all, this is the month of resolutions, diets, gym memberships, and good intentions. So the Make Your Own Rules Cookbook offered a bit of a bridge to all of that. You see, it’s a book that focuses on creating healthy choices, good habits, and experimentations in the kitchen so that you can (you know what I’m about to say here) make your own rules when cooking.

So without further ado, let’s chat a bit about the Make Your Own Rules Cookbook.

I’m really drawn to cookbooks that are written by 1 person, because you get amazing stories, a glimpse into their lives, and the recipes feel more cohesive. Tara isn’t someone I knew much about, but my sister has followed her for years.

Tara Stile created Strala yoga, which is her own take on yoga. I’m actually pretty excited to look into Strala a bit in the upcoming months if I get bored exercising. And she found that she just felt better when she stopped eating takeout and eating out all of the time.

Her cooking is plant-based, and this is the second cookbook like this I’ve featured. It’s certainly not because that is how I want to eat, but I’ve been drawn to these books. So perhaps subconsciously I’m telling myself that I want to eat healthier.

And Tara’s whole concept in how she cooks is to not sacrifice. To eat well but also to indulge here and there. She, like me, grew up in the Midwest, however she grew up in Illinois and I’m a Missouri girl. But either way, her family was centered around farming, like mine, and she grew up eating the same types of foods and styles I did. And the idea of cooking for an army and eating tons of veggies is one we were both surrounded by.

Having the Midwest and farming in common made me automatically connect more with Tara. Now she lives in New York City, travels all over the world and “citifies” the recipes from home and her travels to make them work for her. It seemed like something many of us could adopt in our own lives. Make Your Own Rules Cookbook Organization:

I literally read this cookbook as if I were reading a book. The intro lets us know that Tara moved to the big city without much knowledge of cooking. Watching her mom and grandmas cooked seemed magical and a bit mystical, so she didn’t get into cooking as an adult. So she kinda learned how to cook in her 20’s, and found herself experimenting and that’s when she realized how incredible cooking could be to improving your creativity.

She also walks through her food rules and how to get your kitchen ready. This is the place to understand how she started eating the way she did, and how you can too. Tara covers how to clean your kitchen properly, and how to cleanse what is in your fridge and pantries. She also talks about the pantry staples that she always keeps on hand. The list isn’t your typical list, but it’s also not a ton of stuff either. However you find that she truly uses these ingredients throughout a huge chunk of her recipes.

Onto the recipes . . . there are 11 chapters of recipes. They are broken down by meals and she has a huge range of recipes. Her recipes are ones that she has created, others she’s adapted from recipes growing up, some recipes from her childhood, and other recipes from (or inspired by) her friends and travels. So as you can imagine, you’ll find a Midwestern recipe next to one from a Russian friend or her tropical travels or a Japanese-inspired dish.

I personally love the eclectic-ness of the recipes, because I’m a bit eclectic myself. Perhaps that’s because I love traveling and trying new foods, and then being transported back to those trips as I recreate those dishes at home. So understandably, I can’t pick a favorite chapter in her book, because they all intrigued me. The beverages chapter with smoothies and juices look fun to try, she has TONS of breakfast recipes, and then she and I both love desserts, so I see a lot of things I want to bake.

Finally you’ll find an index at the back, which I’m a fan of. What’s to Love about the Make Your Own Rules Cookbook? Crave-worthy Make Your Own Rules Recipes:

Wow that was a long list! I skipped over adding several recipes to avoid this post from becoming a novel. It excites me, honestly, to think that I could really start eating more of my meals like this. And in some aspects I already do with great oatmeal recipes, using almond milk whenever I can, and with my yummy spin on ramen.

This Make Your Own Rules Cookbook is gorgeous, approachable, and totally doable! Tara walks you through the principles of adjusting your diet and cleaning up your kitchen. Then it’s all about giving you the confidence and freedom to try new stuff and play. After all, cooking should be fun, a stress reliever, and a place to have control over putting good food in your body.

What do you think of plant-based cooking like we see in the Make Your Own Rules cookbook? Have you followed Tara Stiles or is she new to you like she is to me? Comment below and let’s chat!

Stay inspired & make healthy choices when you can!
~Kelli