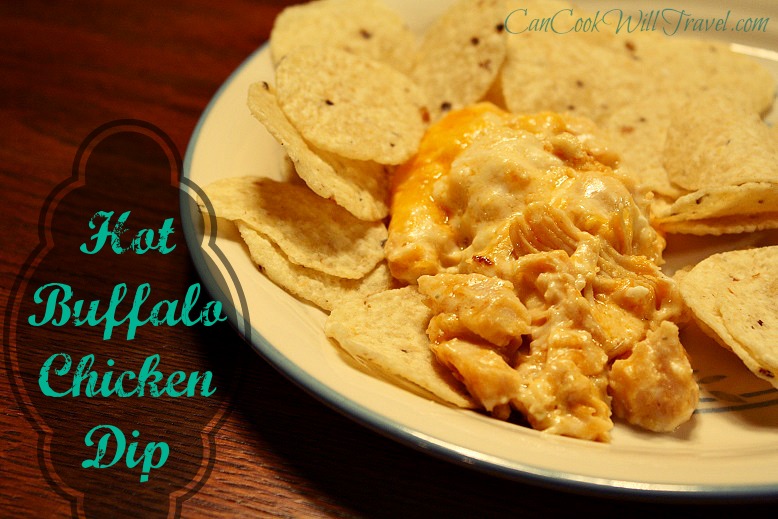 I love this time of year and spending it with family, grazing on food, opening gifts, and just sharing the holiday love with everyone. So I was in search for a great dip to try out with the fam, and when my sister mentioned a buffalo chicken dip, I had just the one I’d wanted to try. I’d pinned this Hot Buffalo Chicken Dip on Pinterest (or cheesy hot wing dip as it was called) from a site called Family Fresh Meals, and the time had come. To say this dip is easy would be an understatement. You need 5 ingredients plus whatever you want to eat the dip with (like chips, crackers, bread celery, or carrots). First you heat the cream cheese and blue cheese dressing together in a saucepan until the cream cheese is melted. Then combine the chicken and hot sauce. I used canned chicken for convenience and it worked really well. In a baking dish, layer the chicken on the bottom followed by the melted cheese mixture over the top of the chicken. Finally top it with some cheddar jack cheese mix and bake for about 30 minutes.

The recipe makes a 9×13 pan of dip, so I halved the recipe for a smaller group of people. A few things we decided after eating the dish. First, it was really good! The more you ate, the more you got hooked! Second, it would be great to use a smaller dish so the dip could be a bit thicker in layers. Third, more chicken and hot sauce is a must! And fourth, adding some blue cheese chunks would be delightful! So I’ll be tinkering with this recipe a bit in the future, but I have a feeling we will be snacking on this dip quite a bit going forward. It’s just too easy to throw together not to.

Flavor-wise it was rich, but with it being packed with cheese, it’s really no surprise. That’s why portion control is a great thing! The hot sauce addition was great to cut the richness of the cheese and give it a little kick. And I chose to serve it with some tortilla chips, which worked really well, but a great healthier option would be some celery as a nod to the traditional chicken wing sides of blue cheese and celery.

When you’re looking for a quick, warm dip, then you’ll definitely want to click here for the recipe and step by step instructions!

A look back:
One year ago: Turkey Tetrazzini…The Only Way to Eat Leftover Turkey!
Two years ago: Bring on the Artichokes!