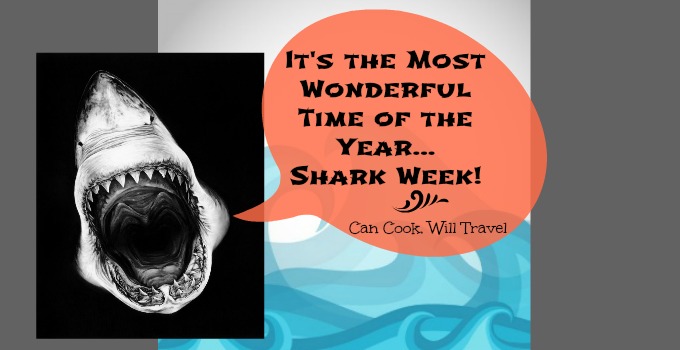 You are here: Home / Blog / Entertainment/The Arts / Get Your Shark On…It’s Time for Shark Week 2015!

This is the beginning of one of my favorite times of the year…Shark Week! Ever since I was a kid and saw Jaws for the first time through the holes in our crocheted blanket, I was hooked on sharks.

It’s the mystery, the danger, the simplicity, and the sheer respect for these creatures that gets my attention and created my slight obsession with sharks. 6 Fun Shark Facts About Me:

For one whole week every year, the Discovery Channel gives us all things shark every evening. Usually shark week is at the beginning of August. This year they moved it up a month. Perhaps it’s because of the timing of the shark attacks in the Carolinas right now, or maybe they wanted to try something new out. Either way I’m psyched!

I look forward to those documentaries that give me even more shark facts to store in my brain. That introduce you to men and women whose passions are studying sharks and putting themselves in somewhat precarious situations for a living just to help all of us and science learn more about these creatures. And then there is Shark After Dark that is kind of like a late-night talk show with (B-list) celebrities, I’m sure hoping that Bob the Shark also plays a part for the third season. The whole production is so wrong it’s right…I love it!

And I just read that Shark Week 2015 is not only starting a month early but it’s also going to have a Shark Week weekend with all new programs in August to finish Summer off on the right foot (or fin)! Holy  shark, I’m so excited!

Shark Week begins with a marathon of past Shark Week episodes today (July 5th) including several new shark documentaries beginning tonight followed by Shark After Dark in the evening.  Fellow shark lovers, you don’t want to miss it!

Previous Post: « Lemon Spaghetti (Or Linguine In This Case) Is a Family Favorite!
Next Post: Weekly Style Crush: Feeling Rather Beachy With This Jewelry Collection »