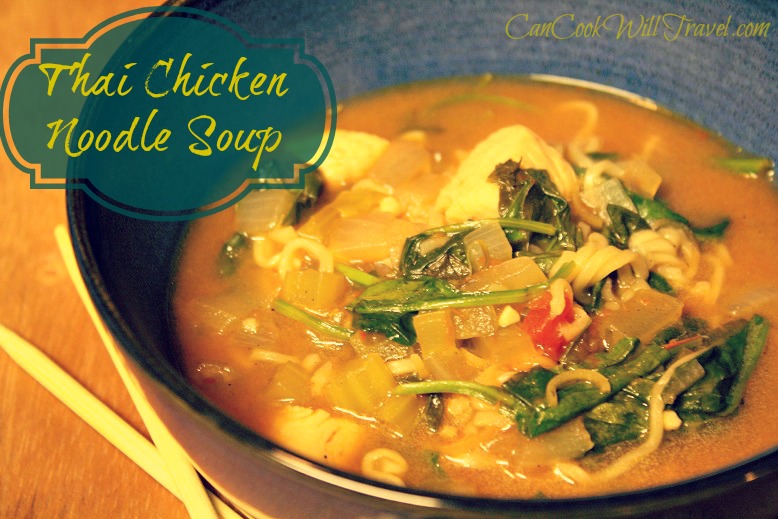 You are here: Home / Blog / Soups & Stews / Not Yo Mama’s Chicken Noodle Soup

Well this week it’s officially Fall, so happy Fall! I wanted to make something that made me think of the season, and naturally I picked soup. I came across a chicken noodle soup with a Thai twist to it, that sounded really delicious and worth giving a try. So I bring you this Thai Noodle Bowl from an interesting blog called Vikalinka – created by a Russian-Canadian transplant in London…fun, right?! I had to do a bit more grocery shopping than usual this week. And I’m not gonna lie…I almost skipped one ingredient altogether. That would be lemongrass. The original recipe said they used lemongrass paste, and it wasn’t until I made my way to Whole Foods for one final searching effort that I finally found lemongrass anything. There was still no paste, but I found that a jar of thinly sliced lemongrass was cheaper than 2 small chutes of lemongrass, so I went for the jarred variety, and it worked great! Overall this recipe was pretty easy to make. Just chop up some onions, celery, and 2 chicken breasts, then make the base of the soup by cooking the celery and onions along with some garlic and spices. Then add your liquids, the chicken and some tomatoes along with cilantro. Bring it to a simmer for 10 minutes. Then cook the noodles. You can really use your favorite Asian noodle here. I went with ramen-style noodles…cheap and easy! They worked great. Finally add spinach and lime juice and you’re all done.

The recipe does call for 3 tablespoons of fish sauce, and I think next time I might only do 2 tablespoons, because the stuff is a bit potent, but it was still delicious. And I tell you that lime juice at the end really made the dish fabulous. It added a bit of brightness with each bite and brought out all of the flavors.

So next time you’re craving some soup and not just because you’re not feeling under the weather, then pump it up with this awesome Thai-inspired recipe.

Click here for the recipe and step by step directions. Hope you enjoy!

A look back:
One year ago: Cabbage + Bacon = A Very Good Thing
Two years ago: Hooray for Stuffed Shells!