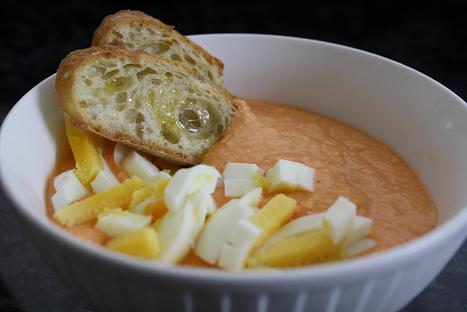 (Recipe is from 5 Ingredient Fix cookbook by Claire Robinson) To make this creamy gazpacho, the following ingredients are neede: Kosher Salt, Garlic-Infused Olive Oil, Sherry Vinegar (or if you’re like me and couldn’t find any, White Wine Vinegar will work well), Ground Pepper, about 2 pounds of ripe Tomatoes, 1/4 cup of whole, blanched almonds (we’ll get to these next), and about 4 inches of a crusty baguette with the skin removed. You’ll want to purchase whole almonds, and I could only find them with the skin on. So to blanch the almonds is pretty easy. I just put the almonds I wanted to use in a bowl, covered them with boiling water for only 1 minute and then drained them and rinsed them with cold water. I then patted the almonds dry. Now the process of removing the skins is a bit time consuming, but not difficult. You could easily do it while watching TV in advance of making this recipe. Just peel away the skins and place the blanched almonds in a bowl for use later. I began the recipe by soaking the bread in 1/2 cup of water for 2 minutes or so. Then I squeezed the water out of the bread and drained the water and was left with almost a dough-like ball as seen above. I then brought a large pot of water up to a boil and placed the tomatoes in the water for 60 seconds. I made sure to cut a small, shallow “X” in the top of the tomatoes with a sharp paring knife. This helps the peeling process. Once the tomatoes have boiled, place them in an ice bath to cool them down so that the peels can be removed more easily. When the peels are removed, cut the tomatoes into quarters and remove the seeds. Now it’s time to grab the food processor. First in goes the soaked bread and almonds. Blend the mixture until the almonds are finely chopped. Then as the the food processor is running, slowly pour in the cup of garlic-infused olive oil until the mixture is smooth and thick. Add in the tomatoes and two Tablespoons of Sherry Vinegar (or White Wine Vinegar, in my case). Blend until smooth and season with salt and pepper. Transfer the soup to a bowl and refrigerate for at least an hour or until you are ready to eat it. I ate mine the following day and it was delicious. I diced a hard-boiled egg to top it. I also sliced some of the baguette and drizzled the pieces with olive oil. I baked them at 400 degrees for about 10 minutes and served them with the soup. This was a rich and delicious treat to get me through the day! Preparation Instructions:
1. Soak the bread in water until soft, about 2 minutes. Squeeze out water for bread to resemble a dough-like consistency.

2. Remove skins from tomatoes by bringing a large pot of water to a boil. Cut a shallow “X” on the top of each tomato and drop in the boiling water for 60 seconds to blanche. Meanwhile, prepare an ice bath by filling a large bowl with ice and water. Remove blanched tomatoes from boiling water and immediately plunge tomatoes into ice bath. Remove skins of tomatoes and quarter, removing seeds.

3. In a food processor or blender, blend bread and almonds until almonds are finely chopped. While motor is running, add oil in a slow steady stream. Once a smooth, thick consistency is reached, add in skinned and seeded tomatoes and the vinegar. Season to taste with salt and pepper and blend until smooth. Refrigerate soup for at least one hour.

4. Serve this rich soup chilled, in small portions, with crusty bread and enjoy!