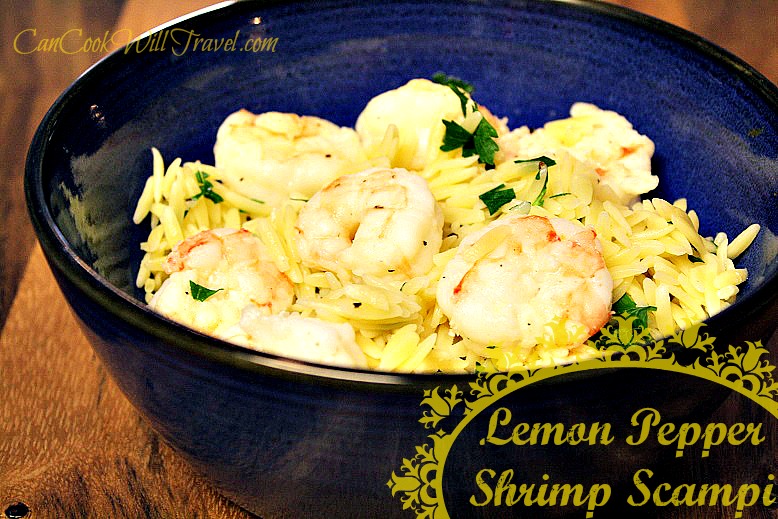 You are here: Home / Blog / Healthy / Something from the Sea – Shrimp Scampi!

Did you know it has been Shark Week on the Discovery Channel this week?! You’d probably have to live under a rock by now to have not seen mention of it somewhere on social media. So fun fact about me…I love Shark Week! Well let me clarify that a bit. I am a bit of what I like to call a “Shark Snob” because I only give a darn about Great Whites…any other sharks pretty much bore me. Sorry, Tiger and Bull Sharks, it is what it is. So you’re probably thinking what does this have to do with this week’s cooking post, Kelli? Well, I’m glad you asked! I was looking for something to make this week for dinner, and thought a nod to Shark Week would be fun, but I had to eat real food, not make something that looks like a shark. So I bring you Shrimp Scampi…cuz you know, shrimp live in the ocean. (Give a girl a break, okay?) So I’ve digressed enough…about the shrimp scampi. I was searching for a great recipe, but dear me, these recipes had an ungodly amount of butter in them, which would taste fabulous, but I was definitely inspired to find a lighter version. Mission accomplished thanks to Cooking Light.

I used less than 3 tablespoons of butter, so I consider that a small victory. And this was an uber easy recipe to make. For me the longest part was thawing out the shrimp. Now those of you who live on a coast and have access to fresh seafood, I admit I’m slightly jealous. The freshest shrimp I can get is frozen, so I’ll have to stick with that as I’m oh-so-land-locked. 🙁

The dish has lemon & pepper in it to flavor the shrimp which is served with Orzo (rice-shaped pasta) that has been combined with fresh parsley and salt. Now one thing I will most likely change up next time is to mix the shrimp and orzo together before serving it, so that the orzo has a bit more of the lemon-y flavor.

All in all, this was delicious and light and was a perfect dinner to devour as I watched Shark Week. So click here for the recipe, nutritional info, and step by step instructions. You know you want to…and the leftovers are great!

Oh and if you missed Shark Week, including Shark After Dark featuring Bob the Shark, then check out these Bob the Shark videos – they are ridiculously silly and many a bad joke are made, so you’ve been warned.

A look back:
One year ago: Egg Roll: To Bake or Not to Bake…Not Even a Question!
Two years ago: Orzo with Artichoke Hearts & Peas