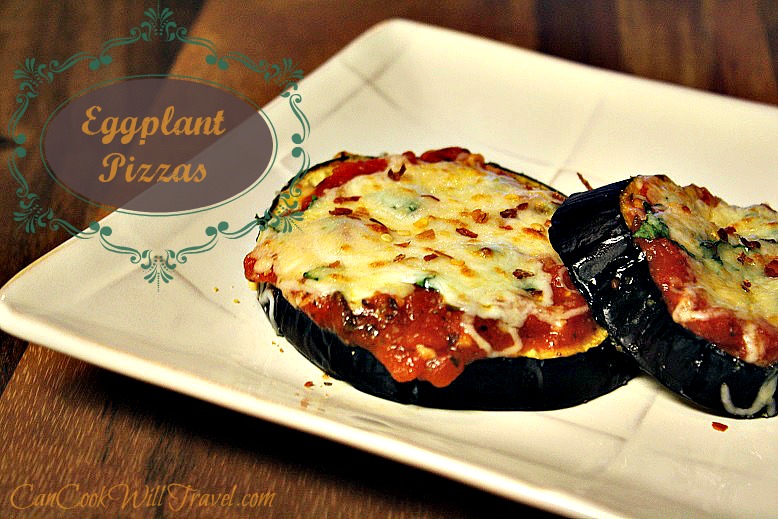 (Recipe can be found on Kalyn’s Kitchen site here.)
Step by Step Instructions: If you want to make your own sauce then grab yourself some Extra-Virgin Olive Oil, Minced Garlic (3 cloves), 1 can of Diced Tomatoes, Dried Oregano, and Italian Seasoning. Start off by cutting the ends off of your eggplant after you’ve rinsed the veggie. Then slice it into about 3/4 inch thick slices. Place a couple of layers of paper towels on a cutting board and sprinkle both sides of the eggplant slices with salt. Then let the eggplant sit for 15 minutes. After 15 minutes turn on the oven to 375 degrees and flip over the eggplant slices on the paper towels. Then you can start on the sauce by heating 3 teaspoons of olive oil in a sauce pan over medium heat. Add 3 minced garlic cloves to the oil and heat for about 30 seconds or so until it’s lightly brown. Stir the sauce and bring it to a low boil and then turn the heat down to low and simmer the sauce. You’ll want to stir it regularly and use a fork to mash the tomatoes up a bit. After a total of 30 minutes you should notice (although it’s hard to see in the photo) that the eggplant has had a fair amount of moisture come out of it and be absorbed by the paper towels. Wipe the slices off with clean paper towels and in the process much of the salt will be removed. Then place them on an oiled cookie sheet. I wiped my Silpat with some olive oil just to make sure they were flavorful and didn’t risk sticking to the cookie sheets at all. Then brush the tops of the eggplant with some olive oil and sprinkle the top with Italian seasoning. Roast on the middle rack of the oven for 25 minutes or until the eggplants are toasted but not mushy. As the eggplant roasts, keep simmering the sauce. Periodically I poured in a splash of water just to keep the sauce consistency where I wanted it. Have I mentioned how great my kitchen smelled at about this point?! Then I rinsed and dried off about 15 basil leaves. If you have big basil leaves 10 leaves should be sufficient. Then you want to chiffonade the basil. To do this stack about 5 leaves and then roll them lengthwise until you have a small log. Then with a sharp knife cut across the log to get strips of basil. (Sorry for the blurry pic.) Once the eggplants are lovely and roasted, it’s time to assemble the pizzas. Start by cranking up the oven to broil. Begin by spooning about 1-2 tablespoons of sauce on top of each eggplant slice and then sprinkle some basil on each slice. Then generously top each slice with the cheese mixture. Place the eggplants back in the oven on a top rack for about 2 minutes or until the cheese is melted and slightly golden. Don’t they look delicious?! They certainly were. Serve these pizzas while they are still hot and enjoy! Bet ya can’t eat just one! Happy broiling!

Preparation Instructions:
1. Cut off both ends of the eggplant; then cut it into 3/4 inch thick slices (trying to make them the same thickness!)  Put the eggplant pieces on a double layer of paper towels and sprinkle both sides generously with salt.

3. While the eggplant sits, make the sauce.  Heat 2-3 tsp. olive oil (depending on your pan) and saute the finely chopped garlic just until it becomes fragrant.  (Don’t let it brown.)  Add the petite diced tomatoes, dried Italian seasoning, and dried oregano and let the sauce cook at a low simmer until it’s thickened, breaking up the tomatoes with a fork as it cooks.  (Add water as needed, a few tablespoons at a time as the sauce cooks, keeping it hot by simmering at very low heat until it’s needed for the eggplant slices.)

4. After 30 minutes, wipe the eggplant dry with paper towels (this also removes most of the salt.)  Spray a roasting sheet with olive oil or non-stick spray, lay eggplant slices on, brush the tops of the eggplant with olive oil, and sprinkle with dried Italian seasoning.  Roast the eggplant about 25 minutes (but “not so long that the slices become mushy and lose their shape” as Julia says.)

6. After 25 minutes or when eggplant pieces are done, remove eggplant from the oven and turn oven setting to broil.  Spread a few tablespoons of sauce on the top of each eggplant slice, sprinkle with thin basil slices (if using) and top with a generous amount of cheese.  Put pizzas under the broiler until the cheese is melted and slightly browned. This took me about 2-3 minutes. Serve hot, with red pepper flakes to sprinkle on pizza if desired.