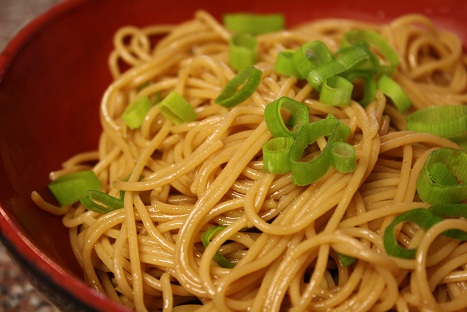 Sometimes we are told that we can’t say “yes” to everything, and this is very true–if we did, we’d all go crazy (or more crazy than normal!). But these Sesame Noodles are definitely worth saying yes to! I was flipping through the Pioneer Woman‘s cookbook (called Food From My Frontier) and came across this dish. I was on the hunt for something fast, easy, and with lots of ingredients I already had on hand, and this recipe checked all of those boxes. To say it was easy was an understatement. All I had to do was cook the noodles, and then mix up the sauce while while the pasta cooked. Probably the biggest challenge with the dish was to find some of the Asian ingredients I needed.

The recipe in the cookbook calls for toasted sesame oil, whereas the recipe on the Pioneer Woman’s website doesn’t specify that the oil should be toasted. Also, I could not find any oil specifically called “hot chili oil” as the recipe calls for, so I found something that sounded similar: Mongolian Fire Oil. It seemed like the main difference was that the Mongolian Fire Oil had garlic infused in it, where hot chili oil is canola oil infused with chili peppers. I’m here to say that the sauce was wonderful, so if you can’t find hot chili oil either, then improvise and use what you can find.

The Sesame Noodles are yummy on their own, as a side, and they are really great cold as a salad, too. Plus they come together in a snap so they are perfect when you’re in a rush. Click here for the recipe and step by step instructions.

What I was cooking up a year ago: Fun with Fennel

I was completely unfamiliar with cooking with fennel, so I’m so glad I gave it a shot. Giada uses lots of fennel, and because she is a big cooking idol of mine, I figured that it had to be tasty. The salad I made was really good, but the Roasted Fennel was so delicious! It was really easy and made a fabulous side to some mahi-mahi, so you’ll definitely want to give this recipe a shot!