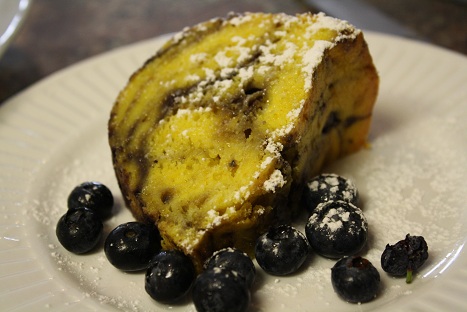 (Recipe can be found on the site Peas Love Carrots here.) It doesn’t take much to make this cake come together: Plain Yogurt (I went for fat-free Greek Yogurt, Lemon (juice and zest needed), Ground Turmeric (optional for yellow color), 1 cup of fresh or frozen blueberries, White or Vanilla cake mix (I went for a sugar-free yellow cake mix which was great, and lemon would be yummy too), and then whatever is needed for the cake – I needed oil and 3 eggs. I began with the blueberry mixture. Heat 1/2 cup of water and 1 cup of blueberries. Once the mixture begins to bubble, reduce the heat to low and simmer for 5 minutes. While the blueberries simmered, I preheated the oven to the temperature the cake mix calls for. Then I zested one lemon. When the blueberries were finished simmering, I removed the pan from the heat to let the mixture cool. I think it took about 30 minutes or so. Then it was time to make the batter. I mixed the cake mix in my Kitchen Aid as the box instructed. In this case I added water, oil, and 3 eggs to the mix and used my mixer to combine the ingredients for about 2 minutes… …until everything is thoroughly incorporated as seen above. Next up, I added 1 cup of Greek yogurt, 1 teaspoon of turmeric (again just for pumping up the yellow color of the cake), the zest of one lemon and the juice of one lemon. Using my spatula, I folded the ingredients into the batter… …until the batter is light and fluffy and the ingredients are mixed throughout. I went back to the blueberries and used my immersion blender to puree the blueberries. You could also use a blender or a food processor if you don’t have a hand-held blender. Here is where it gets fun. I poured the blueberry puree into the batter bowl. I used my spatula to poke the puree into the batter a bit because it was much thinner than the batter, but I was very careful NOT to stir the batter and puree together. The idea is to keep them essentially separate so they create a lovely swirling effect throughout the baked cake. I liberally sprayed my bundt pan with cooking spray and then I poured the batter and puree into the bundt pan. I used my spatula to spoon the ingredients into the pan to help me give the swirled effect. Isn’t it so pretty?! The cake is baked according to the box’s baking temperature and time frame for a bundt pan. I ended up cooking mine a bit longer to get a toothpick to come out clean when inserted into the cake. Now let the cake sit after it is baked and cool down a bit before attempting to remove it from the pan. After about 30-40 minutes, you can see by comparing this photo with the one above that the cake deflated a bit while it cooled, so it’s important to let it cool in the pan or it would likely fall apart when trying to remove it from the pan. I then (carefully) placed my serving plate over the bundt pan and flipped it over, so that the cake came out of the pan onto the plate. I love the purple and yellow swirls on the cake. It makes me think of my school I grew up in where our school colors were purple and gold. 😉

Then just cut out a slice and I topped mine with powdered sugar and some more blueberries…yummy! You could also use simple syrup or honey as a topping too, but I love the look of the powdered sugar and how it allows me to get the cake in my mouth more quickly by not making a simple sugar. Definitely try this out! With the few modifications I made, it’s a wonderfully healthy dessert that you won’t feel guilty eating. Enjoy!! Ingredients:
One box vanilla or white cake mix (you can also use lemon if you really want lemony cake!)
PLUS
Whatever ingredients the cake mix calls for
1 cup of plain yogurt (you can also use blueberry yogurt to really up the blueberry flavor!)
1 cup frozen or fresh blueberries
1/2 cup water
The zest and juice of one lemon
1 teaspoon of turmeric (optional, for bright yellow color – don’t worry, your cake won’t taste like turmeric!)

Preparation Instructions:
1. Preheat oven to temperature according to boxed mix for a bundt pan.

3. Add blueberries and water to a small saucepan to simmer for 5 mins, or until thawed (if using frozen) then allow to cool.

4. Mix all cake mix ingredients according to directions, folding in the cup of yogurt, lemon juice and zest and optional turmeric.

6. Pour puree into your cake batter, but do not stir.

7. Pour batter into your bundt pan and bake according to box instructions (your cake may take a little longer because of the additions).

8. Remove after baking and allow to cool before inverting and removing.

9. Glaze with a simple syrup, honey or simply dust with powdered sugar!