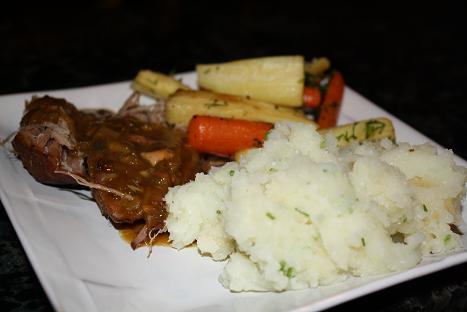 You are here: Home / Blog / Side Dishes / Rooting Around…

This week began with me trying to figure out exactly what I wanted to cook. I decided that I wanted to see what vegetables are in season in the winter and try to cook with one or two of them that I’m not very familiar with. I settled on working with two root veggies: the parsnip and celery root. The parsnip is maybe not so unfamiliar to most of us. It’s very similar to a carrot in nearly every way but the color. The celery root, however, is extremely unique. You can see from the photo above how bizarre looking it really is. In fact, it’s so strange looking that I almost couldn’t locate it in the grocery store.  It was brown and dirty looking and looked like a human heart that was sprouting roots. Sounds appetizing, doesn’t it?!

Let me first say that you could probably purchase parsnips at most grocery stores.  Celery root, on the other hand, was a bit more tricky to locate. I ended up finding it at a Hen House grocery store, and as I mentioned, it took a lot of hunting through the vegetable section until I found it right under my nose.

As far as working with these vegetables goes, I ended up dealing with a parsnip just like I would a carrot. Their shape, peel, and overall texture are extremely similar, so I think you’ll find that cooking with them is very easy. The celery root does require a little extra treatment. I started off with rinsing the celery root under the faucet before doing anything simply because it was still fairly dirty.  Then I grabbed a good knife and chopped off the top and bottom of the vegetable.  The next step was to stand it up on one of the cut ends and begin cutting off the outer skin with the knife until you have removed it all. I think of this part as how I would handle a grapefruit rind if I’m trying to section the grapefruit. Once the skin is removed, I rinsed off the celery root and was ready to cut it up as I needed it.  It’s an interesting process, and you’ll end up with something like this: Recipes:
The recipes I made this week were all found on the Food Network website. They had a ton of different recipes to offer for both vegetables, so it was fun to decide what to cook.

This is one of Ina Garten’s recipes.  It was super easy to make and ended up being my favorite dish of the week, I have to admit. I love roasting any vegetables, so I’m not surprised that this one was such gem. Plus I love Ina Garten’s style of cooking.  It’s very rustic and she really urges people to use what is in season, which was my theme this week. The end result were slightly caramelized, but mainly tender, parsnips and carrots that were perfectly seasoned.  The chopped dill on top brought a freshness to the recipe and believe it or not, and when eating my meal I actually saved my roasted parsnips for last, because they were such a treat! I would highly recommend this dish.  It’s simple and elegant and a perfect addition to the pot roast I cooked that night. For the recipe and step by step instructions of my favorite dish this week, please click here!

The next recipe I cooked for my pot roast feast was this one by Robin Miller of the Food Network.  Let me first mention that mashed potatoes are a sacred food for me. I love them with roast of any kind, and I always make them the same way…the right way, because why mess with a good thing?  So for me to veer off and make a different mashed potato recipe, let alone one with celery root in it, speaks volumes about how much I’m growing as a cook, don’t you think?!

I will admit to the fact that the biggest reason for me to make this was because I wanted to play around with cooking celery root and I thought I’d only have the energy to make one more dish with the pot roast, and I had to have mashed potatoes. (I warned you that I loved mashed potatoes, which really is a separate post unto itself.) This recipe also ended up being very easy to make and turned out beautifully. I urge you to buy a celery root just for the first whiff of it as you begin cutting off the peel. It’s the brightest celery smell and was a lovely addition the normal potato dish. It mashed wonderfully and really rounded out this dinner, so click here for the details on creating these spuds. This final recipe came a couple of nights later, and really was just a great excuse to make my own sweet potato fries. Created by the Food Network’s Sunny Anderson, this was also an easy dish to execute and the spices alone made it worth making. The spice mixture requires a spice I had never cooked with before–Chinese 5-spice powder.  I found this in the Asian foods section of the grocery store, and it added so much dimension to the dish. If you make this one, you really need to scour your local stores until you find the spice…please!

Overall, it was a real treat.  The cayenne added a nice kick and the 5-spice powder provided a sweetness to balance out the spicy.  Next time around, I might cut up the fries into smaller matchsticks than the recipe recommends, just so they get a little crispier, but goodness, they are really delicious!

For step by step instructions on how to make these, click here!