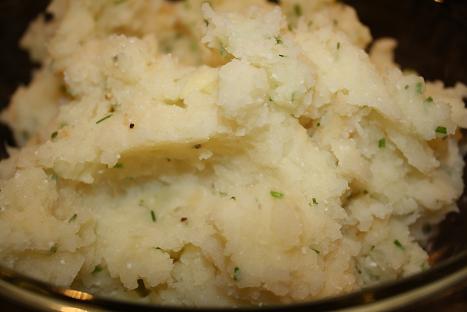 I began by peeling my potatoes.  The recipe calls for 4 large potatoes, or 2.5 lbs.  It took about 5 potatoes for me to have 2.5 lbs, since mine weren’t very large potatoes.  Once they were all peeled, I cut each one length-wise.  Then I tried to cut them into about 2 inch pieces. I then peeled the garlic and cut off the ends. I ended up using 5 garlic cloves because they were pretty small, and I like garlic. Okay, let’s talk celery root. I first rinsed this off to get some of the dirt off of it. It’s so gross-looking, isn’t it?  Don’t let that stop you. Just don’t stare at it. Grab your knife. Take control, quickly.  Chop off the top and bottom. You’ll feel better if you do. Now turn the root on one of the cut ends.  Begin by taking the knife and cut off the outer skin until it looks like the above. I then rinsed off the celery root and the cutting board and knife so that I could dice it. Then I put the garlic, potatoes, and celery root into a large pot and poured enough cold water over them to cover the top. I turned the heat to high and brought everything to a boil. Once the veggies began boiling, I turned them down to a medium heat so that they could simmer for about 10 minutes. At this point they were fork-tender. I grabbed a potato masher (you can you a spoon if you don’t have one) and poured in the olive oil and about half of the buttermilk.  Once I had incorporated that, I added the remaining buttermilk and continued mashing. Once the consistency looked good, I added freshly cracked pepper and salt along with the cut up chives.  I carefully folded the mixture together with a spoon. Voila! The dish is done…easy, right?! And the celery root adds such a great flavor to the mashed potatoes, that I was pleasantly surprised! So good with pot roast, too! Preparation Instructions:
In a large saucepan, combine potatoes, celery root and garlic cloves. Pour over enough water to cover and set pan over high heat. Bring to a boil, reduce heat to medium and simmer 10 minutes, until potatoes are fork-tender.

Drain and transfer potatoes, celery root and garlic to a large bowl. Add buttermilk and olive oil and mash until smooth (or lumpy, whatever you like!). Fold in chives. Season, to taste, with salt and black pepper.