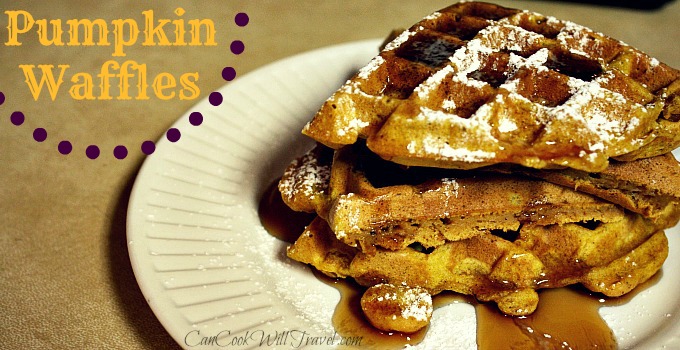 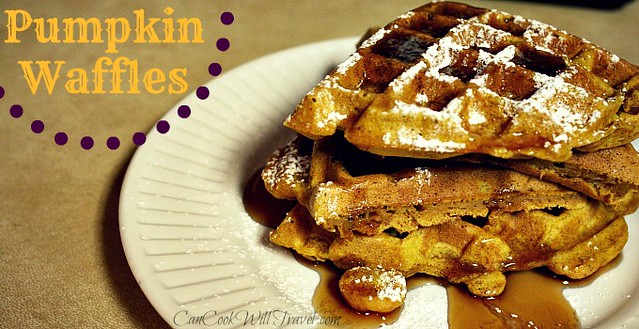 (Recipe can be found on the site No. 2 Pencil here.)
Step by Step Instructions: 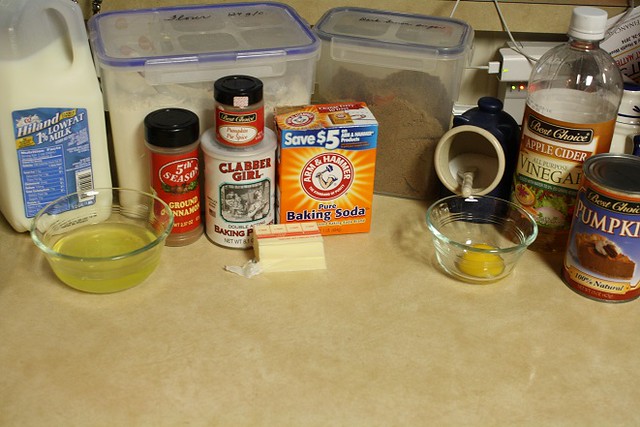 Pumpkin Waffles come together in no time. Here’s what you’ll need: Milk (I would have used Almond milk but I was almost out, so 1% was it this time), 3 Egg Whites, All Purpose Flour, Cinnamon, Pumpkin Pie Spice, Baking Powder, Baking Soda, 4 tablespoons of Butter, Dark Brown Sugar, Kosher Salt, 1 Egg Yolk, Apple Cider Vinegar, and Canned Pumpkin. 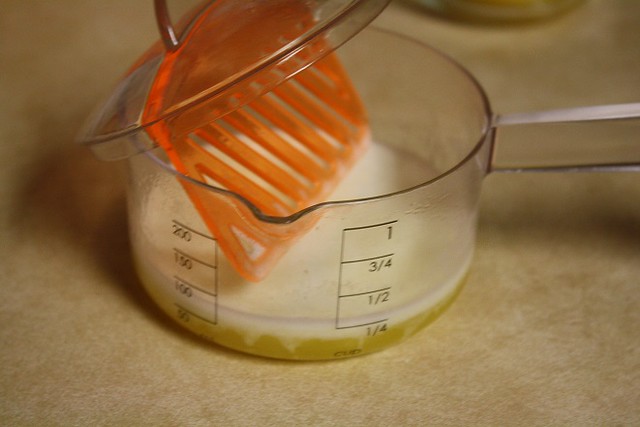 Start off by melting 4 tablespoons of butter. Then set it aside so it can cool completely. In case you’re curious about this contraption, it’s to melt butter in the microwave without making a huge mess. 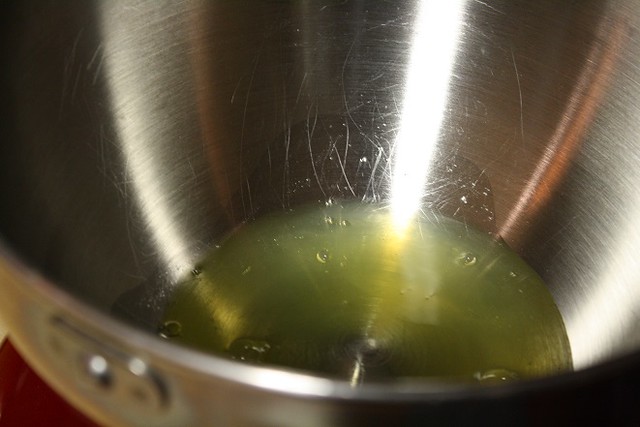 Put the 3 egg whites in a stand mixer and get it going at a pretty high speed using the whisk attachment. 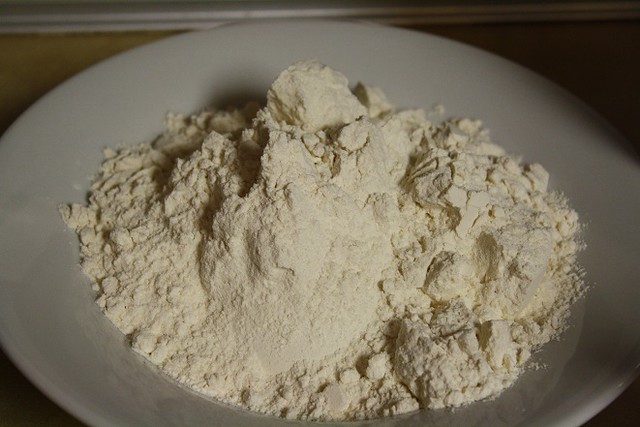 Measure out 2 cups of all-purpose flour. 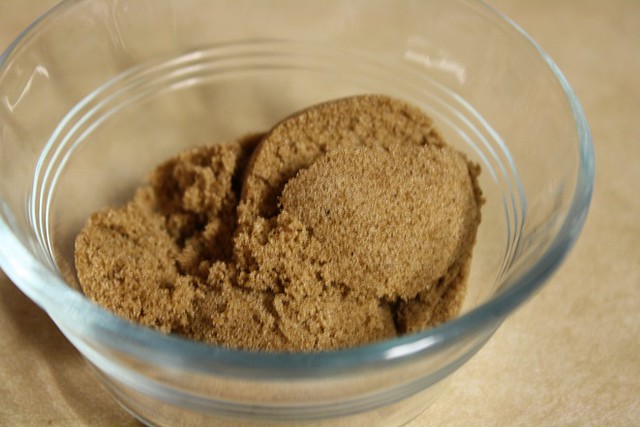 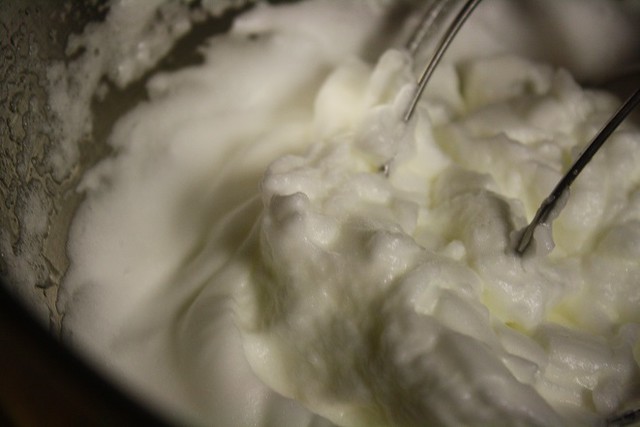 By now the whites were whisked nicely in stiff peaks. Gotta love multitasking when cooking! 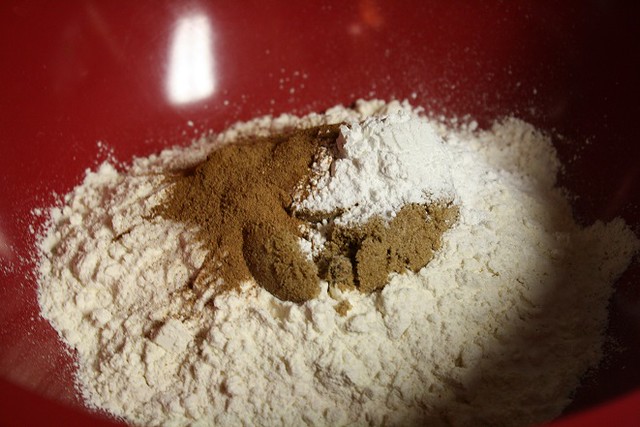 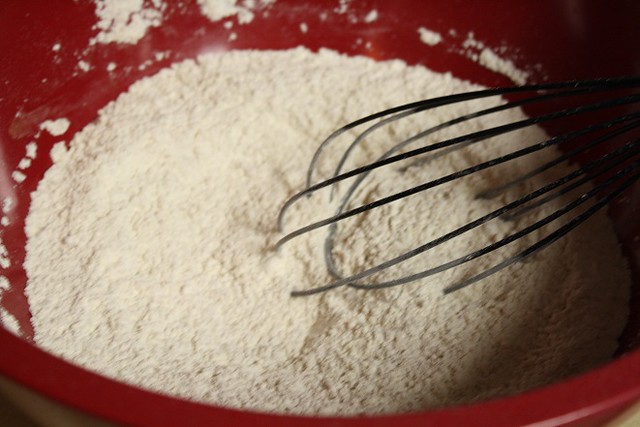 Whisk all of the dry ingredients together. 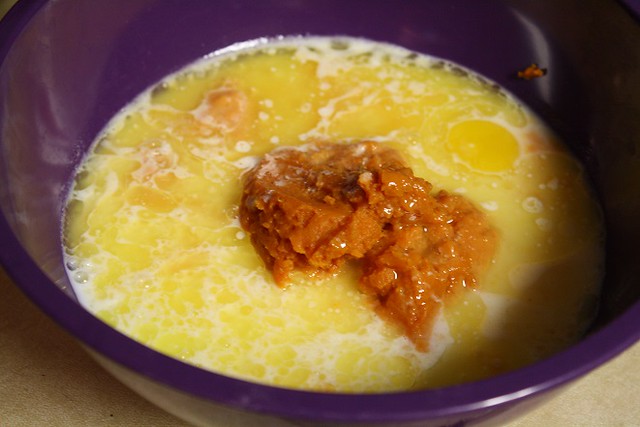 In a smaller bowl add 1 1/2 cups of milk, a cup of canned pumpkin, one egg yolk, the melted butter, and 2 tablespoons of apple cider vinegar. 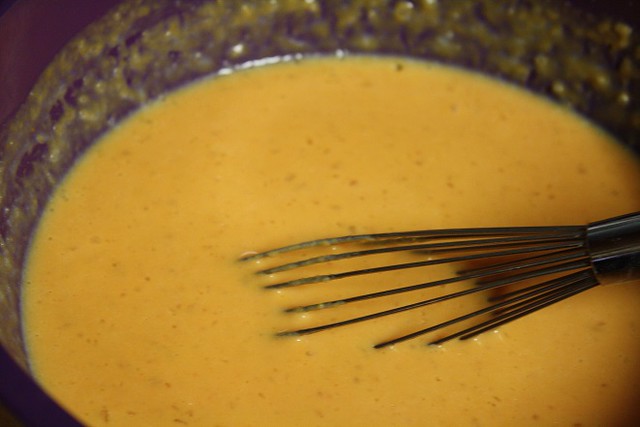 Whisk up all of the wet ingredients. 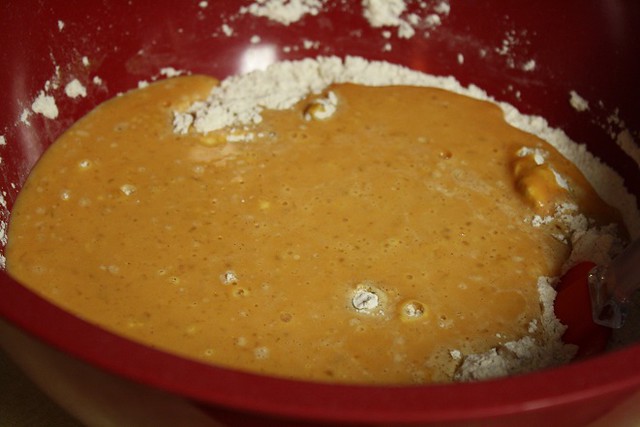 Pour the wet ingredients into the large bowl with the dry ingredients. 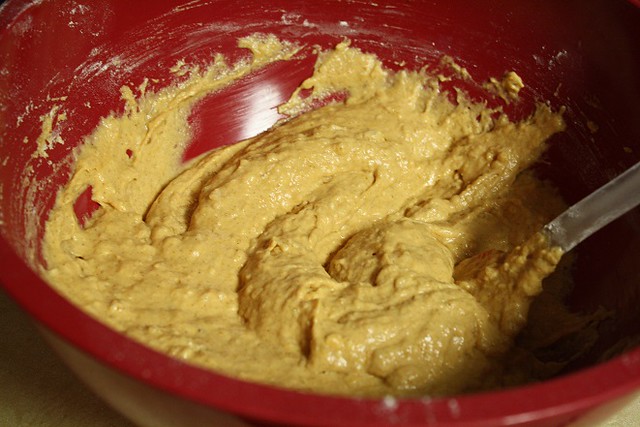 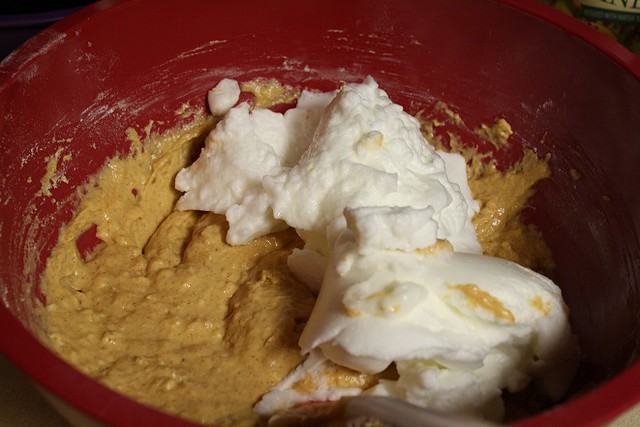 Once the batter is combined, add the egg whites to the bowl. 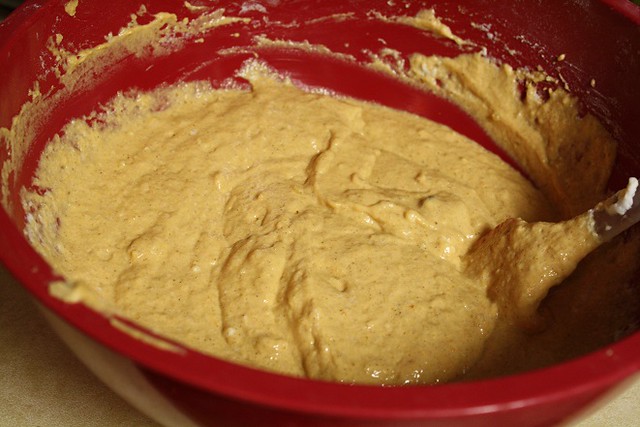 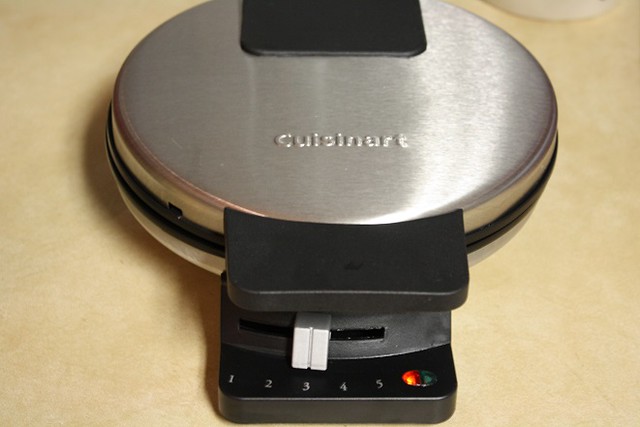 Say hi to my new waffle iron! Isn’t it cute?! Go ahead and preheat yours according to the manufacturer’s instructions. 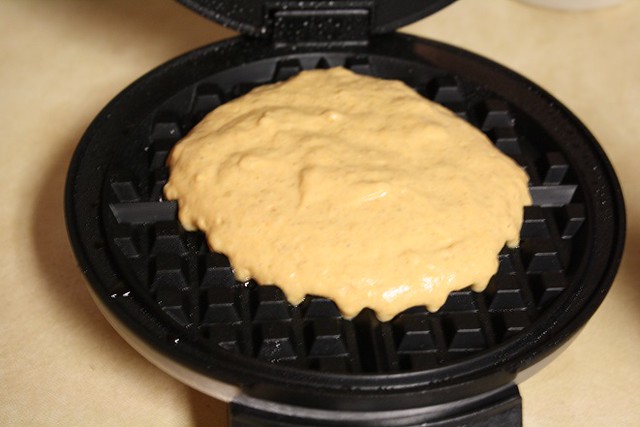 Once it’s hot, add the batter to the center and shut the lid. 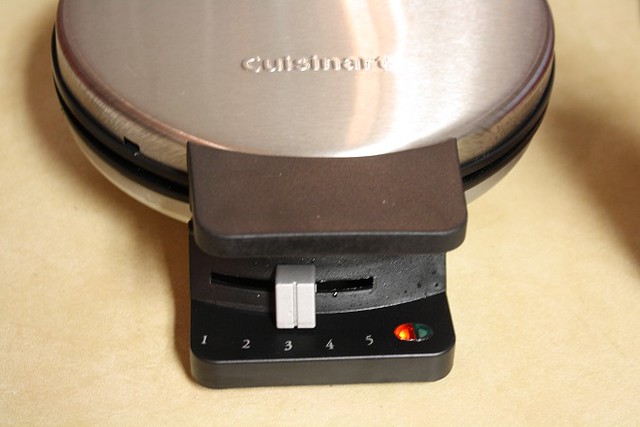 Start cooking the waffle. I kept an eye on mine but it notifies me when it’s done. 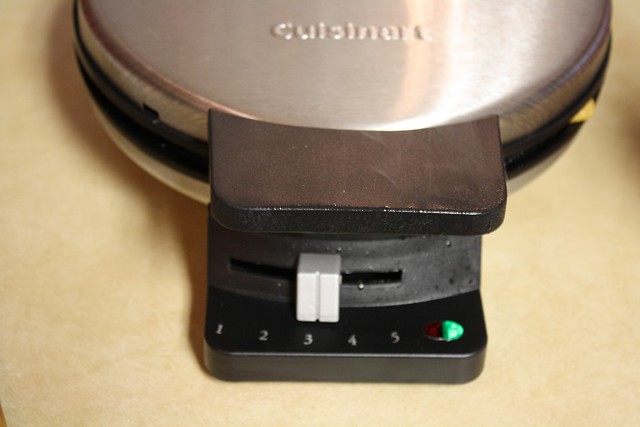 Mine switched to a green light when the waffle was done. 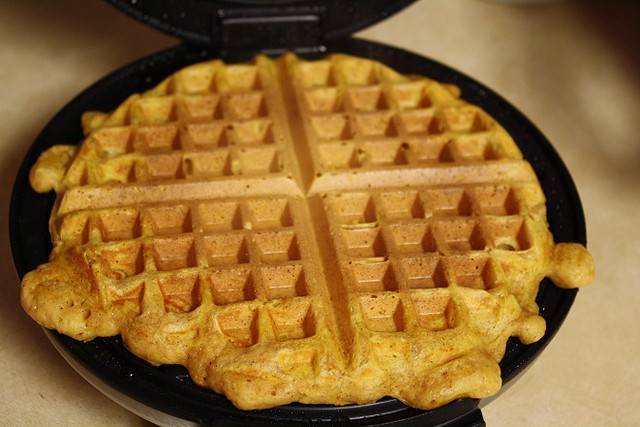 Here is the finished waffle…ta da! 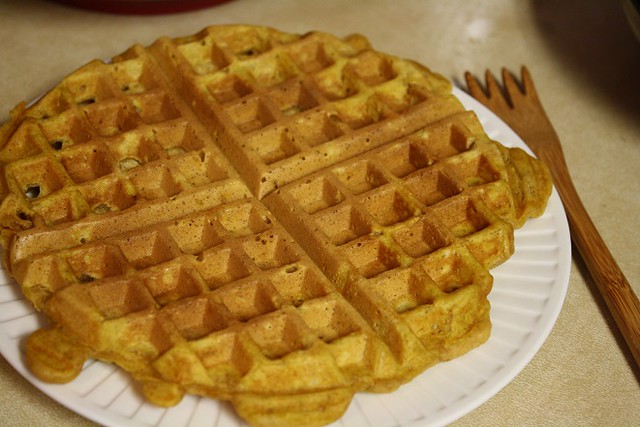 Use something non metal to remove the waffle. I found this great, little wooden fork that loosened the waffle and removed it pretty easily. At this point, I put my cooked waffles on a wire cooling rack. That helps the waffles not get too soggy. 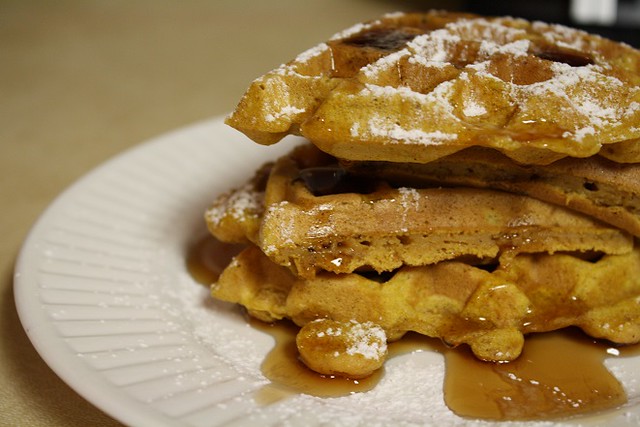 Then serve up the waffles…yum! I poured a little maple syrup and sprinkled powdered sugar over the top and it was perfect! Any leftover waffles can be refrigerated and reheated in the oven at 350 degrees for 3-4 minutes, or in a NuWave oven if you have one of those. It lets them taste just about like they just came out of the waffle iron. Happy ironing!