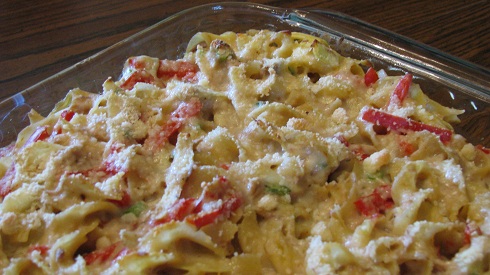 (Recipe can be found at MarthaStewart.com here.) Begin by preheating the oven to 400 degrees. Then in a pan, heat 1/6 cup of olive oil over medium heat and saute one red bell pepper that has been had the seeds and stems removed and was thinly sliced. While the peppers begin heating, cook the pasta according to the package directions or slightly less time, so that it is not quite al dente. Since I halved the recipe, I just cooked up half of the package (8 ounces). The recipe says to coat the 8×8 inch dish with olive oil, but I opted to just spray it with a good coating of cooking spray. While the peppers are sauteeing (and you’re stirring them occasionally), drain a can of artichoke hearts. If they are whole hearts, as mine were, slice them into large pieces. Also go ahead and drain the tuna now as well. Once the pasta is done cooking. go ahead and drain it and return it to the pot and set it aside. Then add 1/4 cup of flour to the peppers and stir it around for about 1 minute. The idea is to cook the flour a bit so you don’t have a raw flour taste. To complete the creamy sauce, 2 1/2 cups of milk gets added now. The recipe does call for whole milk, but I opted for 1% milk here, and it worked great. Gradually add the milk and stir it while adding it to the peppers and flour mixture to prevent lumps. Then simmer to the sauce. Once the sauce has simmered, add it to the pasta and combine the two. The casserole is nearly done. Just add the drained tuna, drained and chopped artichoke hearts and 2-3 scallions that have been thinly sliced to the pot and combine. Season with salt and pepper. The pour the mixture into the greased casserole dish and sprinkle grated Parmesan cheese over the top. Bake the casserole for about 20 minutes or until it’s heated through, the topping is golden and the sauce is bubbly. Then dig in. This was seriously good, and I can’t wait to try out other variations of this dish. I hope you enjoy canned tuna a little bit more after you try it! 3. Remove from heat; add mixture to noodles in pot, along with tuna, artichoke hearts, and scallions. Season with salt and pepper, and toss. Divide between prepared baking dishes, and sprinkle with Parmesan. Bake until golden and bubbling, about 20 minutes.