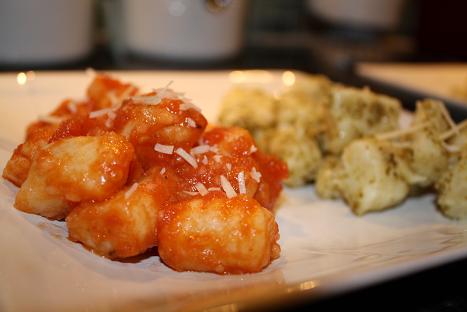 You are here: Home / Recipes / Season / Fall / How to Make Gnocchi like an Italian Grandmother Recipe Cut two pounds of russet potatoes in half and place in a pot of cold, salted water.  You will want to bring the potatoes to a boil and cook them for about 40-50 minutes. When the potatoes are cooked through (I made sure a paring knife went into the potato easily), I removed them from the pot, and placed them cutside down on a cutting board.  Then I took a paring knife and quickly cut away the peel while holding onto the potato with a paper towel, so I didn’t burn my hands. I repeated the process with each potato half and then cut each piece in half again. The next step needs to occur while the potatoes are relatively hot. Take two or three pieces of potato at a time and press them through a potato ricer.  I let the potatoes pile up on the cutting board until they were cool enough that I could touch them and the egg wouldn’t cook when poured over them. I moved the potatoes to the counter so I could knead them more easily.  Then I poured the egg and flour on top.  Using a metal scraper, I folded the ingredients together on the counter until it formed large crumbles and then used my hands to lightly knead the dough into a ball. Then using the metal scraper, I divided the dough into 8 segments. Taking one segment at a time, I pressed the dough together and then rolled it into a rope.  I then cut the rope into 3/4″ sections. After lightly flouring the sections, I then ran them over the tines of a fork to give them the traditional ridges.  It takes some practice, but if I take a fork and rest it upside down so the backside of the fork is facing up, I found that I could easily take each section and run it from the top to bottom of the fork using my middle finger as a guide. Then place about 10 gnocchi on a spider (or slotted spoon) and lower them into boiling water.  You can put about 20 gnocchi in to boil at a time. You’ll know when the gnocchi is finished cooking when you can see it float to the top of the pot (see above photo). …or toss with your favorite pesto sauce.  I just used a jar of pesto that I bought in the store to speed up the process.  Top with some freshly grated cheese and enjoy!

Preparation Instructions:
1. Fill a large pot with cold water. Salt the water, then cut potatoes in half and place them in the pot. Bring the water to a boil and cook the potatoes until tender throughout, this takes roughly 40-50 minutes.

2. Remove the potatoes from the water one at a time with a slotted spoon. Place each potato piece on a large cutting board and peel it before moving on to the next potato. Also, peel each potato as soon as possible after removing from the water (without burning yourself) – I’ve found a paring knife comes in handy here. Be mindful that you want to work relatively quickly so you can mash the potatoes when they are hot. To do this you can either push the potatoes through a ricer, or do what I do, deconstruct them one at a time on the cutting board using the tines of a fork – mash isn’t quite the right term here. I run the fork down the sides of the peeled potato creating a nice, fluffy potato base to work with (see photo). Don’t over-mash – you are simply after an even consistency with no noticeable lumps.

3. Save the potato water.

4. Let the potatoes cool spread out across the cutting board – ten or fifteen minutes. Long enough that the egg won’t cook when it is incorporated into the potatoes. When you are ready, pull the potatoes into a soft mound – drizzle with the beaten egg and sprinkle 3/4 cup of the flour across the top. I’ve found that a metal spatula or large pastry scraper are both great utensils to use to incorporate the flour and eggs into the potatoes with the egg incorporated throughout – you can see the hint of yellow from the yolk. Scrape underneath and fold, scrape and fold until the mixture is a light crumble. Very gently, with a feathery touch knead the dough. This is also the point you can add more flour (a sprinkle at a time) if the dough is too tacky. I usually end up using most of the remaining 1/4 cup flour, but it all depends on the potatoes, the flour, the time of year, the weather, and whether the gnocchi gods are smiling on you. The dough should be moist but not sticky. It should feel almost billowy. Cut it into 8 pieces. Now gently roll each 1/8th of dough into a snake-shaped log, roughly the thickness of your thumb. Use a knife to cut pieces every 3/4-inch (see photo). Dust with a bit more flour.

5. To shape the gnocchi hold a fork in one hand (see photo) and place a gnocchi pillow against the tines of the fork, cut ends out. With confidence and an assertive (but light) touch, use your thumb and press in and down the length of the fork. The gnocchi should curl into a slight “C” shape, their backs will capture the impression of the tines as tiny ridges (good for catching sauce later). Set each gnocchi aside, dust with a bit more flour if needed, until you are ready to boil them. This step takes some practice, don’t get discouraged, once you get the hang of it it’s easy.

6. Now that you are on the final stretch, either reheat your potato water or start with a fresh pot (salted), and bring to a boil. Cook the gnocchi in batches by dropping them into the boiling water roughly twenty at a time. They will let you know when they are cooked because they will pop back up to the top. Fish them out of the water a few at a time with a slotted spoon ten seconds or so after they’ve surfaced. Have a large platter ready with a generous swirl of whatever sauce or favorite pesto you’ll be serving on the gnocchi. Place the gnocchi on the platter. Continue cooking in batches until all the gnocchi are done. Gently toss with more sauce or pesto (don’t overdo it, it should be a light dressing), and serve immediately, family-style with a drizzle of good olive oil on top.