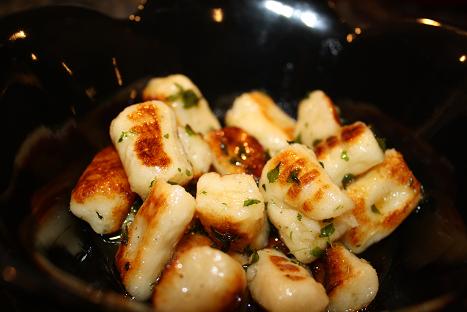 Start by microwaving 1 lb. of potatoes for about 12 minutes until they are cooked throughout, turning over once.  In the meantime, I made the butter thyme sauce by melting a stick of butter over medium heat until it browned.  Then I took it off of the heat and added fresh thyme…super easy!  Once the potatoes were cooked, I cut them in half and scooped out the inside.  I riced the potatoes, and when they had cooled a bit, I drizzled 3 T. of beaten egg, 1/2 t. salt, 1/4 t. pepper, and 1/4 c. of flour on the mound. I used my metal spatula to fold the ingredients together until I could knead them lightly by hand.  I floured the counter a couple of times so the dough didn’t stick, and then once it was formed into a ball, I cut it into four equal sections. I then pressed one section together with my hand a bit so that it wouldn’t fall apart as I rolled it into a log.  I did this with all four segments and then cut them into 1″ sections, which I then floured lightly.  If you look at the photo above, you can see flecks of pepper, letting you know this is definitely going to be a gnocchi dough with some flavor. Then I took each floured segment and rolled them down the backside of the tines of a fork guiding them with my middle finger. I put about 2 T. of olive oil in a saute pan and heated it on medium heat.  Once the oil was hot, I placed about 10 gnocchi at a time in the pan and used tongs to flip them over once the first side had browned slightly. When the gnocchi was finished browning, I tossed them with the brown butter thyme sauce, and served.  This dish would also be great with any sauce of your choice. Preparation Instructions:
Cook the butter in a heavy medium skillet over medium heat until it begins to brown, about 2 minutes. Remove from the heat. Add the thyme leaves. Set aside.

Pierce the potato all over with a fork. Microwave the potato until tender, turning once, about 12 minutes. Cut the potato in half and scoop the flesh into a large bowl; discard the skin. Using a fork, mash the potato well. Mash in the salt and pepper. Mix in 3 tablespoons of the egg; discard the remaining egg. Sift the flour over the potato mixture and knead just until blended.

Spoon the gnocchi and butter sauce into shallow bowls. Top with the Pecorino and serve.