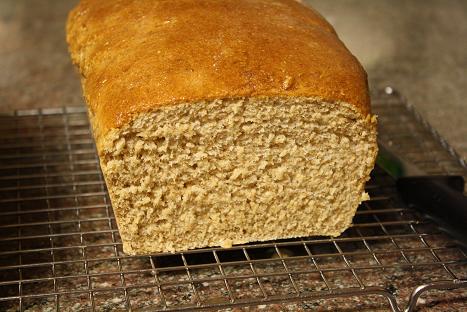 (Recipe can be found on the Tasty Kitchen site here.) In a medium saucepan, heat 4 tablespoons of butter and 1/2 cup of honey… …until it’s melted together. Then add 2 1/4 cups of water to the butter and honey and combine the mixture. Using an electric thermometer, I monitored the liquid until it was at about 110 degrees (look at your yeast’s packaging to see what temperature range activates the yeast) and then 4 1/2 teaspoons of active dry yeast is added. Let the mixture sit off of the heat for 10 minutes while the yeast begins to bubble. I preheated my oven to 350 degrees. Then using my Kitchen Aid mixer and dough hooks, I combined the salt, 2 cups of whole wheat flour and 1 cup of all-purpose flour. I began running the mixer on low speed and slowly poured in the butter, honey, and yeast mixture until it was combined. Then I increased the mixer speed to medium and ran it for an additional two minutes. I stopped the mixer and added one egg. Then I added another cup of whole wheat flour and combined the mixture. I then increased the speed again to medium and mixed the bread for 2 more minutes. One cup of quick cooking oats gets added to the dough. Finally, I added the remaining flour ( 1 cup of whole wheat flour and 1 cup of all-purpose flour)… …and mixed it until the dough was smooth and elastic. I sprayed a glass bowl with cooking spray and placed the dough ball in the bowl. Then I placed the bowl near the warm oven to rise for 1 hour. The dough should double in size. Then the fun part – punching down the dough. I deflated the dough, and floured my work surface lightly. I placed the dough on the work surface and covered it with the bowl as you can see in the photo. Then I let the dough sit for 15 minutes so it could rise a bit more. Once the dough had risen again, I cut it in half and shaped the halves into loaves and put one in each greased loaf pan. Then I placed the loaf pans near the oven again and covered them, so that the dough could rise again for another hour. After an hour, the dough should have risen again and nearly doubled…time to bake! Bake the dough in a 350 degree oven for 35 to 40 minutes, or until it’s nicely browned. I then removed my bread from the oven, turned them out of the loaf pans, and then rubbed some butter over the top of each loaf…delicious!! Enjoy! Preparation Instructions:
1. In a medium bowl (or in a saucepan), heat the butter and honey until the butter is melted. Remove from heat and add the water; the mixture should be warm (110-120 degrees). Stir in the yeast and let sit until bubbly, about 10 minutes (this is called making a sponge).

3. Gradually beat in the egg and one cup of whole wheat flour to make a thick batter. Continue beating for two minutes.

4. Stir in oats, 1 cup whole wheat flour and 1 cup all purpose flour. Knead till smooth and elastic. Use more flour if dough is too sticky (I usually add about 2/3 cup more).

5. Place in a greased bowl and cover. Let rise in a warm place until doubled, about 1 hour.

6. Punch the dough down. Turn onto a floured surface; cover with the bowl and let rise for 15 minutes.

8. Bake at 350 degrees (F) for 35 to 40 minutes.
(You can make the dough in a bread machine, using bread flour instead of all-purpose flour. Use the dough mode setting for the largest size loaf. Follow the recipe’s directions for the second rise and baking.)