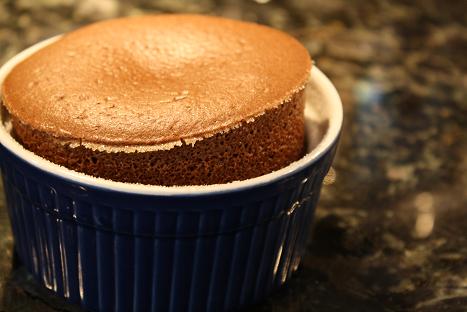 (Recipe can be found on the Cooking for Engineers site here.) This is all you need to make this divine dessert: 2 or 3 Egg Whites (I used 3), Heavy Cream, Sugar, Cream of Tartar, 2 Egg Yolks, Dark Chocolate (I used Ghiardelli 72% Cacao so stay in the 70% range when shopping for chocolate), and 1 Tablespoon of butter (1/2 is for the soufflé and the other 1/2 Tablespoon is for buttering the ramekins). Speaking of, I began with buttering my ramekins. I broke 1/2 Tablespoon of butter in two, then used my hands to spread the butter inside each ramekin. Then I spooned some sugar into each ramekin and carefully move the sugar around so that it coats all sides of the ramekin, sticking to the butter as you can see above. I do not own a double boiler, but I don’t really need one. I just use a large saucepan with a glass bowl over the top (you could also use an aluminum bowl). Just make sure to not put too much water in the pan. You do not want it to touch the bottom of the bowl or it will burn whatever you are melting. Begin by bringing some water to a boil and then turn the heat down so the water is simmering. Then place the bowl over the pan and in goes 4 oz. dark chocolate, 1 oz. of heavy cream, and 1/2 Tablespoon of butter. Then remove the bowl from the heat and whisk in two egg yolks. After stirring in the yolks, the chocolate will not be smooth and that’s okay. Carry on! Once soft peaks have formed, add the sugar to the egg whites and continue beating until stiff peaks form as you can see in the photo above. Look for the peaks to remain standing up and not droop over. Then add the egg whites in in small amounts and carefully fold them into the chocolate mixture. Once all of the egg whites are combined the mixture will be smooth and airy. Then divide the soufflé between two ramekins so they are at least 3/4 full and put them on a baking sheet. Bake them at 375 degrees for 15 minutes. The soufflés will have risen up beautifully as you can see above, which is caused by the air pockets expanding during the baking process. Serve immediately in the ramekin, or let the ramekins cool and turn the soufflés out and place right-side up on a lined baking dish. You can bake them a few more minutes so they rise again. The soufflés will deflate a few minutes after they are out of the oven, so don’t be concerned. They are decadent and delicious and will be impossible not to dive into! 2. Prepare two 6 ounce (180 mL) soufflé ramekins by applying a layer of cold butter to the interior of the ramekins. Use your fingers to apply an even, thin coat of butter to all parts of the ramekin including the sides. Pour some granulated sugar into the ramekin and shake and roll the ramekin to coat the bottom and sides with sugar. Several sources claim that the butter and sugar help the soufflé rise, but this is not actually true. The butter and sugar are really there to add flavor of the crust and aid in the release of the soufflé from the ramekin (if desired).

4. Bring some water to a boil in a pot. Once the water boils, reduce the heat until the water just simmers. Place a small metal bowl over the pot to form a double boiler.

5. Melt the butter, cream, and chocolate in the double boiler.

6. Stir to help the melting. Once the chocolate has melted, turn off the heat.

7. Whisk the two egg yolks into the chocolate. The resulting mixture may look like the chocolate seized, but don’t worry, it will smooth out once the egg whites are folded in.

8. In a medium bowl, beat the egg whites with the cream of tartar until the egg whites reach soft peaks. (The cream of tartar is added to egg whites to increase the acidity slightly. This allows the proteins to bind together a bit more easily making stronger bubbles to form the basis of the egg white foam.) This can be accomplished with a bit of effort with a whisk (took me about 5 minutes) or a hand mixer
with a whisk attachment. The term soft peaks means the foam has reached the point where the egg whites stand up when the whisk (or your finger) is lightly dipped into the foam and gently lifted out. The tip of the peak should droop. If the tip stands up straight, then it has reached the stiff peaks stage.

9. Add the sugar to the egg whites and continue to beat until you reach stiff peaks. Adding the whites a little at a time, fold them into the chocolate mixture.

10. Without over mixing, fold the remaining egg whites into the batter.

11. Pour the batter into the two prepared ramekins. Fill them at least 3/4 of the way up. They are now ready to be baked.The best part of making soufflés is that they can be prepared to this point beforehand and refrigerated for up to three days. On the day you plan to serve the soufflés, take them out of the refrigerator about two hours before you plan to serve them so they can warm up a little. If you don’t take them out of the fridge early, then bake them for an extra minute or two.

12. Place the ramekins on a baking pan and place the pan in the oven on a rack set in the middle position. Bake the soufflés for 15 minutes at 375°F (190°C). As it bakes, the air bubbles we’ve incorporated into the batter will start to expand, causing the entire souffle to rise. After fifteen minutes, the soufflé will have risen up out of the ramekin (the photo shows an example of a ramekin filled to the 3/4 full level). (Greater lift can be achieved by using three egg whites instead of two).

13. Serve immediately in the ramekin. (Ramekins will be hot, so use some hand protection to transfer the soufflé.) As the soufflé cools, it will drop and become more dense. An alternate method of service is to remove the soufflé from the ramekin. This easiest accomplished once the soufflé has cooled a bit and a knife has been run along the sides. The soufflé can be inverted and tapped out onto a catching hand and then deposited onto a plate. Reheating the soufflé at this point will allow the air bubbles to expand again and the soufflé will rise back up (although not to its former size).