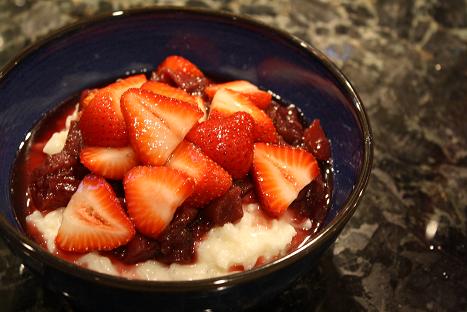 You are here: Home / Blog / Breakfast / Cooking with Rhubarb!

I remember as a kid I would eat strawberry rhubarb pie and really loved it. However, these days I honestly cannot think of the last time I’ve eaten rhubarb. It’s always been in the back of my mind to cook with rhubarb for this culinary journey I’m on. Then I saw a recipe posted on Facebook by Deb of Smitten Kitchen that featured this mysterious ingredient, so I took it as a sign.

I wanted to learn more about the origins rhubarb. I mean what is it really? Well I turned to the site The Rhubarb Compendium and found that rhubarb was used in China for medicinal purposes dating back to 2700 BC…pretty cool. Of course now we use this root vegetable in much the opposite way by putting it in desserts. 🙂 Typically I’ve always seen rhubarb in the pie-form and paired with strawberries, so I wanted to see what else you could do with this interesting food other than put it in a pie. I was anxious to play around with this gorgeous vegetable and see how to tame the tangy-ness that defines rhubarb.

The recipes I’ve chosen to experiment with this week do still focus on sweetening the rhubarb. However, they are all new ways to eat this veggie to me, so I’m excited to see how they taste.

So good. The end. Okay, not really, but these muffins were fabulous. This was the recipe that inspired my week-o-rhubarb. When I saw the Smitten Kitchen post the other day for muffins with rhubarb in them, I was intrigued and had to make these.

Who doesn’t love muffins? I did have a concern about this recipe though. How would the rhubarb taste in the muffins? I’d always had them cooked in a pie, so I wasn’t sure how they would work in this format.

I am going to be honest here. As I made the muffins and put them in the oven, I was pretty nervous about how they would turn out. First of all, I followed the recipe to a “T” but the muffin batter wasn’t as wet as most muffin batters I had made before. And the photos on Smitten Kitchen’s site showed a wetter batter…but I carried on. Then I was concerned that I had put too much rhubarb in the muffins as well. However, there really wasn’t much that I could do but just put the muffins in the oven and see how they turned out. They were amazing and far exceeded my expectations! Sweetness to tame the tangy rhubarb but not too sweet either…a wonderful balance. My point in telling you my concerns and hesitations are to let you know that if you have any of these thoughts as you make the recipe, you aren’t alone. But proceed with these muffins. I had my roommate try them and she hadn’t had rhubarb before and L-O-V-E-D them. In fact, we both agreed that we could pretty much eat them non-stop…good thing we have a fair amount of self-control!

This recipe definitely needs to be made the next time you walk by those purple and green stalks in the grocery store. Click here for the recipe and step by step instructions!

When I decided to do a week featuring rhubarb, I visited a great site for finding recipes…Tasty Kitchen. I have used several of the recipes from this site, which was created by The Pioneer Woman, for my blog. This website is fabulous. I knew they would have some interesting rhubarb recipes to choose from, and I was right.

This recipe seemed like quite the challenge to me, because I had never made risotto before. I’m really glad I decided to make this dish, because I found the process of making risotto to be really interesting. I definitely anticipate a whole week devoted to risottos in the near future. This particular risotto was sweetened and given depth with sugar, vanilla extract, and Mascarpone cheese. The rhubarb is sweetened in a port wine and sugar reduction and the dish is topped with the rhubarb and some sweetened strawberries. I’m not sure that it gets more decadent than this. My taste tester (and roommate) was still talking about how amazing this risotto was the next day, and I’m inclined to agree…so delicious!

If you’re looking for a dessert to impress, or if you’re like me and just made this your dinner (I’m not ashamed!)…click here for the recipe and step by step instructions.

When I came across this recipe (again on the Tasty Kitchen site), it caught my eye and I knew I had to give it a try. Not only did it look really easy to make, but I would never have thought to roast rhubarb. There were only five ingredients in this dish, so it was a cinch to throw together and was roasted in no time. If you are a fan of sweet and sour tastes, then look no further. This recipe was invented for you. There was such an interesting flavor combination in this dish too. Combining the tartness of rhubarb with the orange citrus flavors and sweetness of vanilla…it smelled and tasted delicious!

The only thing I would do differently next time with this dish is to cut the rhubarb into one inch, instead of two inch, pieces so that they were more bite-size and easier to eat. Other than that, I devoured this roasted rhubarb and was really happy with how it turned out.

For yet another inventive rhubarb recipe and step by step instructions, click here.