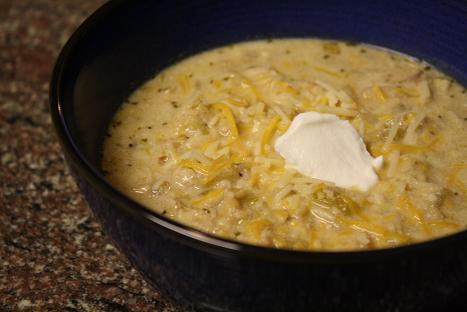 I’d grown up on chili and I have found over the years that I’ve grown to love it. The spicier the better, in fact. I was trying to decide why I hadn’t made chili until now. Aside from what I imagined to be way too many ingredients to mess with and the fact that I’d be stuck with gallons of leftovers (yes, I’m exaggerating) that I had no inclination to eat, I just never seemed to crave chili. Besides, I knew lots of people who made a mean chili, in the event that I ever was in the chili-eating mood.

I found two great recipes for my Chili Night and the best part was that they required me to only buy a couple of ingredients and I had everything else on hand. Gotta love that! All that being said, I can now officially say I’ve now made chili…and it was darned good!

So it was time. Time to make chili for the first time. The thing is that I’ve grown up on “red” chili with beef, kidney beans, tomatoes, etc. I was in the mood for something different, so I opted for a “white” chili recipe. This recipe actually fell in my lap as I was clicking around Twitter. I saw a post about soup and the next thing I knew, I was on the site Eat, Live, Run and staring at this creamy white chicken chili recipe. I have to say that this chili was rich, spicy and delicious. The recipe calls for chicken breast, but I had leftover rotisserie chicken, so I used that instead and it worked like a charm. Additionally it meant I didn’t have to mess with raw chicken (always a plus in my book). The addition of spices and green chiles made me a happy camper. It was so good that I could have licked my bowl, although I restrained myself.

What makes this dish creamy is the addition of light sour cream and half and half (I used the fat-free variety) right before serving the dish. It perked up this dish and enhanced the flavor. I finished off the dish with some shredded cheddar cheese and a dollop of sour cream. I predict that I will be craving chili in the future. This is certainly a chili recipe to add to your repertoire, so click here for the recipe and step by step ingredients.

Now you can’t have chili without cornbread, right?! Well my sister came through on this one. She had found a delicious-sounding cornbread recipe on good ole Tasty Kitchen’s site. What made this cornbread stand out was that it was a Pumpkin Cornbread. What says Fall more than pumpkin? So I was sold on both recipes. With the addition of some pumpkin puree, molasses, cinnamon, and nutmeg, this cornbread was perfect comfort food. The cornbread tasted just like normal cornbread with a nice hint of pumpkin. Plus this recipe came together in a snap. I actually made it while my chili was simmering, which worked out wonderfully.

Talk about delightful and a perfect side to my chili. I found that it was great sliced in half with a little butter (I used spray butter, which worked great) and a drizzle of honey. Sounds great, right?! Well then what are you waiting for? For the recipe and step by step instructions, click here.