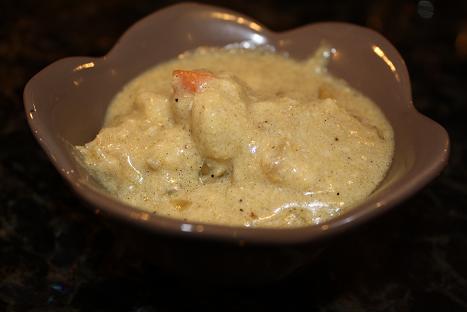 You are here: Home / Recipes / Season / Fall / Chicken and Dumplings Here are all of the ingredients you will need for the chicken portion of the dish. Here are all of the ingredients needed for the chicken dumplings. I went ahead and prepped all of my vegetables before I started cooking anything.  First I finely chopped one medium onion by cutting the onion in half and finely diced it as you can see in the picture above.  I then diced up two stalks of celery and one carrot. I then moved onto the chicken.  I bought a whole chicken cut up, so I had 8 pieces of chicken to work with.  I first ground fresh pepper and salt on one side of the chicken.  I took a piece at a time and flipped the seasoned side down onto a plate with 1/2 a cup of flour.  Then I seasoned the other side and floured the chicken all over. The next step was to add the onions, celery, and carrots to the pot that I cooked the chicken in.  I stirred them around for 3-4 minutes. Once the veggies were cooked a bit, I added the ground thyme and turmeric to the pot and stirred them around. To the veggies, I added six cups of chicken broth (reduced fat and lower sodium) and 1/2 cup of apple cider. Following the addition of the broth and cider, I used tongs to put the chicken back in the pot.  I then reduced the heat to a simmer and put the lid on for about 20 minutes. While the dish was simmering, I moved onto making the dumplings.  I started out with measuring out all of the dry ingredients and I sifted them into a bowl. Then I added one and a half cups of Half and Half to the dry ingredients.  If you want dumplings that won’t fall apart and make the broth creamy in the end, then slowly add the half and half a little at a time and stir until you get a combined batter that isn’t extremely wet. I imagine that it should look more like a biscuit dough does than a pancake batter which mine does, as you can see above.  Note to self… Set the dumplings to the side, then remove the chicken from the pot.  Work one piece at a time to shred the chicken using two forks.  I wish I had photos of this step, but let’s be honest…I’ve realized that I’m horrible at shredding chicken.  It was my first time doing so, and my hands hurt, I broke a nail, and honestly, I forgot to take a photo of the process.  But I digress, where was I? Oh yes, I was adding the last ingredients to the dish. I transferred the shredded chicken back to the pot, then I added 1/2 c. of heavy cream and then dropped the gooey dumplings by the spoonful to the pot.  I put the lid halfway on and cooked for about 15 minutes. I took the lid off, saw what a gooey dumpling situation I had and stirred. I thought I might have made it worse… …but after tasting it, I was pleasantly surprised. It may not have been the most successful recipe I’ve ever made, nor did it look like I expected it to.  However, it was extremely tasty and we gobbled up as much of the finished product as we could.  The leftovers have been great as well.  Trust me when I say that regardless of how your dish ends up, the flavor alone will make you come back for more. I’m glad I was able to go with the flow on this culinary adventure, because while I was laughing to the point of crying, I had a blast and can’t stop thinking about eating it again.  Enjoy!! The Pioneer Woman’s Chicken and Dumplings:

Preparation Instructions:
Sprinkle chicken
pieces with salt and pepper, then dredge both sides in flour.
Melt butter in a pot over medium-high heat. In two batches, brown chicken on both sides and remove to a clean plate.
In the same pot, add diced onion, carrots, and celery. Stir and cook for 3 to 4 minutes over medium-low heat. Stir in ground thyme and turmeric, then pour in chicken broth and apple cider. Stir to combine, then add browned chicken. Cover pot and simmer for 20 minutes.
While chicken is simmering, make the dough for the dumplings: sift together all dry ingredients, then add half-and-half, stirring gently to combine. Set aside.
Remove chicken from pot and set aside on a plate. Use two forks to remove chicken from the bone. Shred, then add chicken to the pot. Pour heavy cream into the pot and stir to combine.
Drop tablespoons of dumpling dough into the simmering pot. Add minced parsley if using. Cover pot halfway and continue to simmer for 15 minutes. Check seasonings; add salt if needed. Allow to sit for 10 minutes before serving.
*Adapted from Gourmet Magazine