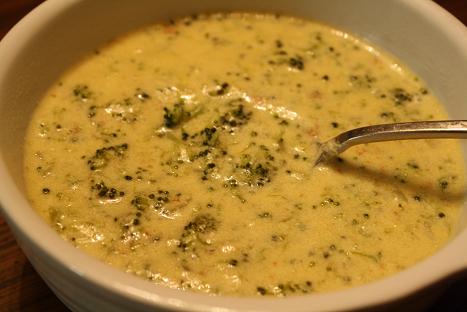 This week I was in another soup mood…I know, Shocker! A few weeks ago I saw on the Pioneer Woman‘s site that she had made broccoli cheese soup, and I immediately added it to my mental list of recipes to make. I love broccoli cheese soup, but it honestly seemed like too much of a hassle.  However once again, this blog is about pushing me to make recipes I have always wanted to tackle, so off I went. I told my mom the week before (Cinnamon-Raisin Bread week) that I was going to make Broccoli Cheese Soup, and she sounded sad that I wasn’t making it this week when I was visiting, so I changed my plans. While I was spending time with my parents this week, I took over their kitchen one night and cooked up this dish.

This soup was easier to make than I thought, and it came together before I knew it. I did alter the recipe just a bit in that I used 1% milk and fat-free half and half instead of whole milk and plain half and half, which didn’t sacrifice taste at all. The cheese I went for was sharp cheddar, because, let’s face it, you can’t go wrong with sharp cheddar cheese!

Everything else was pretty standard for a creamy soup. At the end, you have the choice to eat the soup as is, mash it with a potato masher, or blend it. I opted for the potato masher, since it’s fast, allowed the soup to still have a little texture to it, and it just seemed fun to mash something after the week I was having! 🙂

I’m so glad I tried out this recipe. It was a total hit with the folks, and left me with tons of leftovers to munch on throughout the last couple of days. I’ve had a very hectic week, so that was absolutely perfect!

If you’re craving a delicious soup, then this is the one to try! Click here for the recipe and step by step ingredients and enjoy!

What I was cooking up a year ago: All You Need is Love…And Cinnamon Rolls! (In My Humble Opinion)
This week last year was the week of Valentine’s day, and the one food that I associated with love was cinnamon rolls, and for good reason! Click here to find out why, and also to find a fab cinnamon rolls recipe!