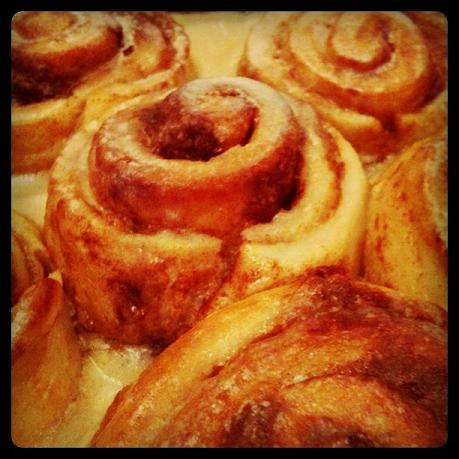 You are here: Home / Blog / Sweets / All You Need is Love…And Cinnamon Rolls! (In My Humble Opinion)

My Grandpa was wonderful, and I miss him very much. In honor of Valentine’s Day being this week, I was trying to think of a food that I really loved but that I also associated with love. When doing this I couldn’t help but think of my Grandpa and cinnamon rolls. No, he’s not a priest, he just played one on TV, I mean on the stage…My Grandpa in the play “Jenny Kissed Me”, which we acted in together. One of my favorite photos of him.

You see, when I was in junior high and high school, I would often walk to my grandpa’s house following my after-school activities to wait for my parents to pick me up. Usually Grandpa wouldn’t be home (he’d be playing bridge down at the senior center), so I would catch up on “General Hospital” and do my homework. There were two things I could always count on when I got to Grandpa’s…One, the fridge would be stocked with Dr. Pepper and two, homemade cinnamon rolls awaited me. Now don’t get the wrong idea…I didn’t get my baking skills from my Grandpa. No, he would buy homemade cinnamon rolls for me every week at the senior center. If there was ever a week that they ran out before he could buy any, he always felt horrible. Me and Grandpa when I was about 5 months old.

Just thinking of this small memory always brings a smile to my face. When my Grandpa passed away six years ago, my mom and I were snowed in at their house. She immediately started baking to distract herself from the news of his passing. I remember walking into the kitchen and asking her what she was making, and she looked up and said “homemade cinnamon rolls.” I got chills when she told me. Since my mom hadn’t made cinnamon rolls lately, I knew it was Grandpa’s way of telling my mom to make sure she always had cinnamon rolls for me. We were up to our eyeballs in the buttery, sugar-packed rolls for a week, and let me tell you that is not a bad way to live! 🙂

So this week, my journey (and my heart) led me to make homemade cinnamon rolls. Surprisingly I have never made them completely from scratch before. I’ve taken short cuts when making them (pre-made dough, etc.) and let’s face it, cinnamon rolls out of the can are hard to beat. But I had to try, for Grandpa.

It didn’t hurt that I had remembered seeing a recipe for decadent-sounding cinnamon rolls on The Pioneer Woman website a few months back. Then on Twitter one day, I had noticed that she posted a link to someone’s blog where they tweaked her recipe so that it made fewer rolls. (The original recipe makes 7 pans of rolls, and that won’t do because I would decidedly eat 7 pans of rolls!) I love this recipe! It was pretty painless, and the dough was completely made in a pot on the stove, which seemed really unique and I was very interested to try out this technique.

Let’s talk about the frosting for a moment, shall we?! It has coffee in it…need I say more? There isn’t a huge amount of coffee, so it’s not overpowering in any way…it’s just delightful. And rich. And amazing.

Seriously, make these. Now. They taste even better than they look, I promise. You will be a big hit with your friends and family if you bake them, which is assuming that you share the cinnamon rolls…and I wouldn’t blame you if you didn’t!

Click here for the recipe and step by step photos of these lovely rolls. Enjoy!!