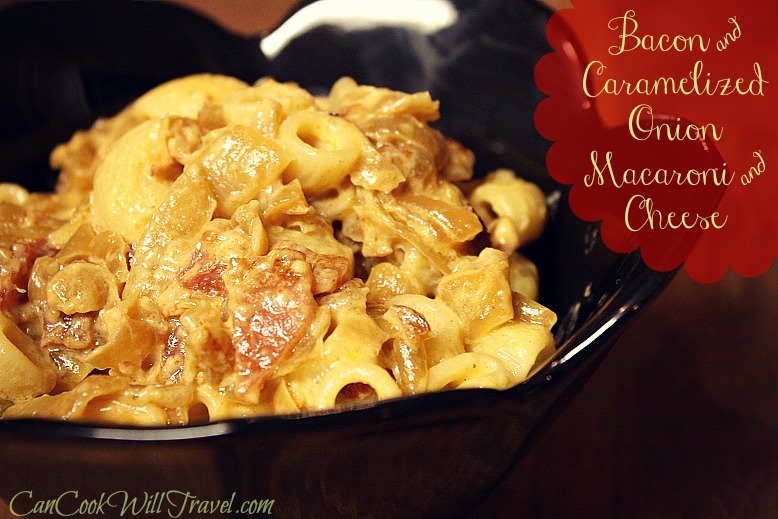 (This Bacon and Caramelized Onion Macaroni and Cheese recipe can be found on the site Julia’s Album here.)
Step by Step Instructions: You too can enjoy Bacon and Caramelized Onion Macaroni and Cheese with the following ingredients: Salt, your favorite Elbow Pasta (I like this larger-sized macaroni called Gobetti), White Cheddar Cheese, Gruyere Cheese, Bacon (8 strips), Milk (I used almond milk and was a little nervous if it would work and it totally did), 3 medium or large Onions, Balsamic Vinegar, Olive Oil, Heavy Whipping Cream, Cayenne Pepper, and Paprika (I used this Smoked Paprika, which was great). I decided to bake my bacon so my stovetop wasn’t full. I preheated the oven to 350 degrees, put the bacon on a rack to help it crisp up a bit better, and baked it until it was crispy (that took about 25 minutes, I’d say). Then I sliced the 3 onions by cutting off the ends, removing the outside layer, cutting it down the middle and slicing as you see above. Then grab a large pan and turn the heat to high. Add 1 tablespoon of olive oil. Once the oil was hot, add the onions and (carefully) stir these non-stop for 10 minutes. Also while the onions cooked, I got a pot of water boiling for the pasta. When the water was boiling, I cooked the pasta according to the package instructions. The onions are brown and smelling delightful at the 20 minute mark. Add a pinch of salt and turn the heat to low or medium-low. Cook for another 10 minutes. You will only have to stir occasionally at this point. …and then transfer to a plate lined with paper towels and let them finish cooling. When the pasta is cooked, drain it and run cold water over it. Let it sit for a few minutes and then you’ll get back to it. After a total of 30 minutes of cooking the onions, remove the pan from the heat. Then add 1 tablespoon of balsamic vinegar and stir so that the vinegar is well incorporated. Here are the onions in their caramelized glory! Yum! Bacon and Caramelized Onion Macaroni and Cheese is about to be yours…Okay…moving on! One great tip that I got from Giada was to put the cheese in the freezer for a bit if it’s a softer cheese like Gruyere or Gouda, for example. It makes it much easier to grate. I grated 1 cup of the White Cheddar cheese and 1/2 cup of the Gruyere. In an effort to reduce dishes, I used the same pot I cooked the pasta in and put in 2/3 cup of cream and 1/3 cup of milk. Again I used almond milk here, but it worked great. I was afraid it might add a weird taste to the sauce, but it really didn’t…hooray! And also add the cheese to the pot. Turn the heat to medium and stir until the cheese is nearly melted. Then add ground pepper, cayenne, and/or paprika to the sauce to your taste level. I like a kick, and wanted to be sure I didn’t have an almond milk flavored sauce, so I added plenty of each. Add the pasta to the sauce and cook it for about 3-5 minutes. Time for the heavy hitters…add in the chopped bacon and caramelized onions and stir it up and then mop up the drool, because this dish will smell AMAZING! Serve this Bacon and Caramelized Onion Macaroni and Cheese up right away and enjoy…I know I sure did! And I think the leftovers may have been even better. Happy caramelizing friends!