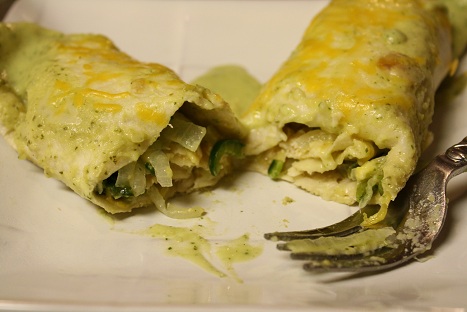 Earlier this year I tried my hand at making chicken enchiladas, and admittedly they were pretty darned good. While perusing some yummy dishes I pinned on Pinterest, I was reminded of an enchilada dish I came across a while back. When I took a look at the recipe it sounded too good not to make. A couple of things caught my eye here. First off, the enchiladas are filled with rotisserie chicken (hooray I don’t have to deal with raw chicken!) and poblano and jalapeno peppers. I have never worked with Poblanos before and that really made me want to give this recipe a whirl. Second, the sauce was like a cream sauce with chicken broth instead of milk or cream. Then it’s blended with sour cream, spices, avocados, cilantro and lime. It just sounded too darned interesting not to try.

I’m SO glad I did. I kept the cooking moving along quickly by doing my prep work ahead of time. Then it was just a matter of making the avocado cream sauce. Once that was done, I sautéed the onions, poblanos and jalapeno peppers until they were cooked through and the onions were translucent. The cumin in the cream sauce helps to add some complexity to the cream sauce, and the peppers in the enchiladas give the meal a serious (but not too outrageous) kick. This recipe definitely falls into the easy category albeit there are a decent amount of ingredients, but most of them I already had on hand. If you like a hint of heat in your food, then this is certainly a great recipe to throw in the mix.

Click here for the recipe and step by step instructions.

What I was cooking up a year ago: Honey Oatmeal Bread – Oh Yeah!
Oh yeah is right, this bread was so delicious and baked perfectly. Homemade bread always hits the spot, and this bread had a butter and honey mixture as its base. There was a fair amount of rising involved for the dough, but the it was all totally worth waiting for. Too bad computers aren’t scratch and sniff!! So good!