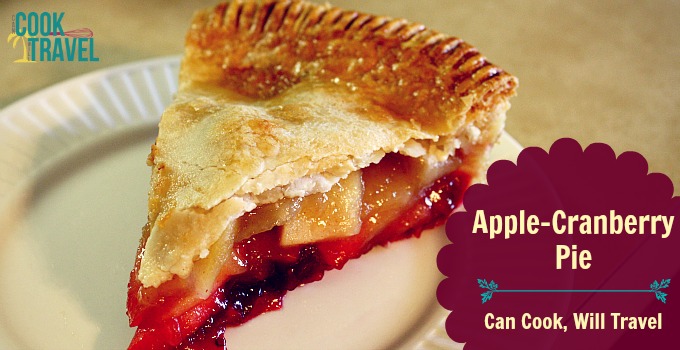 (Recipe can be found at Cook’s Illustrated site here.) This pie is full of flavor and all you need is this: 2 Pie crusts (for top and bottom layers of pie), Corn Starch, Cinnamon, 1 Egg White, Orange Juice, Sugar, 2 cups of Fresh or Frozen Cranberries, Salt, 6-7 medium-sized sweet apples that are peeled, cored, and sliced about 1/4 inch thick (I used Fuji apples). Begin by combining 2 cups of cranberries, 1/4 cup of orange juice, 1/2 cup of sugar, 1/4 teaspoon of cinnamon, and 1/4 teaspoon of table salt in a medium saucepan over medium-high heat. You’ll want to bring the mixture to a boil and stir regularly. Then add the apples to the bowl and combine the mixture well. While the cranberries cook, heat the apple mixture in a microwave-safe bowl stirring every 3 minutes. After about 10 minutes, the cranberries are cooked. You’ll be able to tell when you scrape the bottom of the pan and the mixture doesn’t cover it back up (as you’ll see above). The mixture will be a jam-like consistency. Remove the pan from the heat and add 1/4 cup of water and stir the cranberry mixture. Let the pan sit and cool. It will take about 30 minutes. After about 10-14 minutes of microwaving the apples, they are cooked. The liquid will be thick and glossy and the apples will be tender and will begin to be translucent on the edges. Can I just say how amazing my kitchen smelled at this point?! Let the apple mixture cool as well. It will also take about 30 minutes for them to cool. At this point I put the 2 cooled fillings into storage containers and refrigerated them. But once they are cool, you can proceed with putting the pie together. Preheat the oven to 425 degrees. Place a cookie sheet rimmed cookie sheet in the oven to preheat as well. Roll out 1 disc of dough to 12-inches in diameter on a floured surface. I used pre-made pie crust, but I still needed to roll them out slightly to get it to a 12-inch circle. Then carefully roll the dough onto the rolling pin to help you ease it into the pie plate. You’ll want about an inch of dough around the edges Using a spoon, I carefully spread the cranberry filling over the bottom of the pie plate so that it was in an even layer. The apple mixture is then spooned carefully over the cranberry layer and mounded up slightly in the center of the pan as shown above. Using the same process with the first crust, roll it into a 12-inch circle and carefully lay it over the top of the crust. With a fork, I pressed the edges together so that they were crimped and sealed. Finally I whisked an egg white and brushed it over the top of the pie and the edges of the crust. Then I sprinkled 1 tablespoon of sugar over the top. Then I placed the pie on the rimmed sheet (I lined mine with parchment paper) and baked it for 20-25 minutes. You want the pie to be light golden brown. Here you can see the pie as it was lightly browned. I turned the heat of the oven down to 375 and baked the pie for 25-30 minutes until it was a deep brown. Here is my baked pie. Doesn’t it look so delicious?! Not bad for my first try. This pie was perfectly balanced with tart and sweet flavors and is perfect for the holiday season. Hope you enjoy – goodness knows I did!!