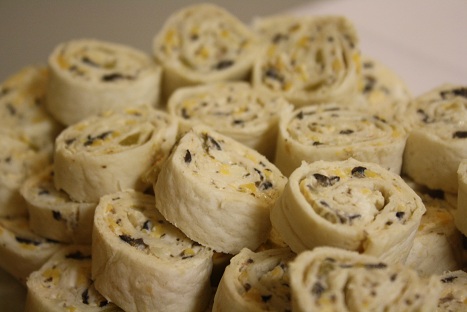 (Recipe can be found on the blog Never trust a skinny cook here.) With only a handful of ingredients, this recipe is a cinch to make and all you need are the following: Mexican-style Shredded cheese, fat free cream cheese, a small can of chopped olives, a small can of diced green chiles, A&E’s Mexican-style sour cream dip, and tortillas (I opted for the carb balance ones). Here is what it looks like after a good stir…I apologize for the slight blur but you get the idea. 😉 Then I laid a tortilla on a cutting board and spread a spoonful of the mixture on the top in a thin layer. Inevitably you will have some filling creep out at the end, so I used a spatula to remove any excess. The recipe calls for 6 tortillas but I used smaller-sized tortillas so I was able to fill 8 tortillas and still have filling left over – I’m thinking it will make a spectacular dip! Then I placed each filled on a plate and covered them with plastic wrap. I refrigerated the tortillas until about an hour before I wanted to cut them. They were great for preparing in advance. Then an hour prior to cutting them, I placed the dish in the freezer for about an hour. The tortillas then are a little more solid (you do not want them frozen though or they won’t cut), which makes them much easier to stand up as you cut them. I sliced them into pretty small slices about 1/2 inch or 3/4 inch wide. Then I stacked the rollups into my travel container and they were ready to go. When it was time to serve them, they held together wonderfully and were a giant hit! I was honestly a little sad I didn’t have any left to munch on the next day, but my thighs are thanking me! I so loved the slight heat from the dip and green chiles, which really amped up the tortilla rollups and made them irresistible!

Ingredients:
6 tortillas (the carb balance ones roll easier and they are better for you but I used half jalopeno cheddar and half spinach and herb this time as they didn’t have the carb balance kind at Sam’s Club)
1 small can of black olives, diced
1 small can of diced green chiles
1 A&E Mexican chip dip
1 Fat free cream cheese
1 2% Mexican shredded cheese package

Preparation Instructions:
1. Mix all ingredients up together, except for the tortillas of course.  You want to be sure you dice the black olives as small as possible.

2. Throw together in a large mixing bowl and stir very thouroughly so the ingredients are evenly dispursed in the mixture.

3. Take a spoon and spread a thin layer of the mixture on each tortilla.

4. Roll up each tortilla into a tube, making the roll as tight as possible.  You may have to wipe off excess mixture from the end when you squeaze it out from rolling.

5. Set the finished tubes on a plate and put them in the freezer for 1 hour to harden up in order to cut them.  If they are frozen solid they are hard to cut but if they are too soft you cannot cut them either so they have to be right in the middle to be cut perfectly.