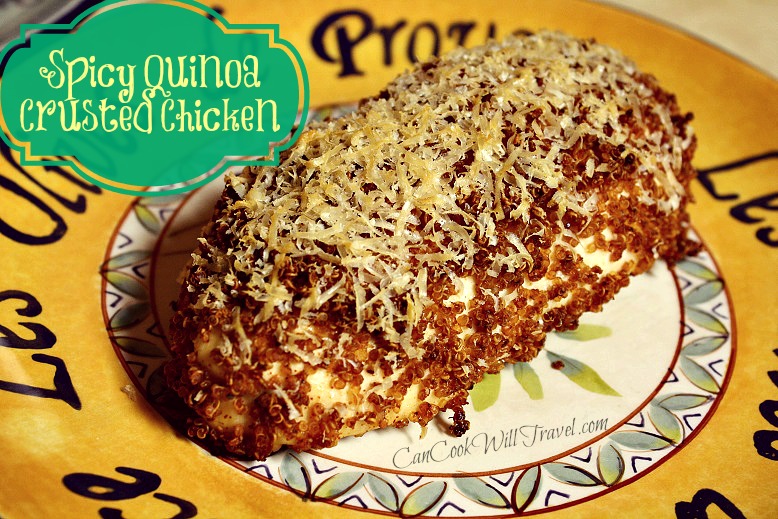 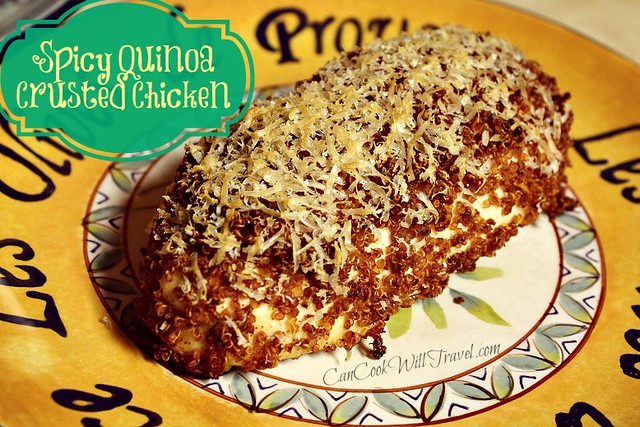 (Recipe can be found on the site Skinny Mom here.)
Step by Step Instructions: 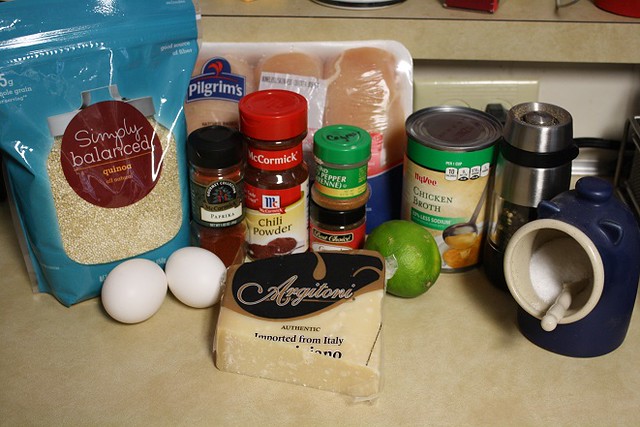 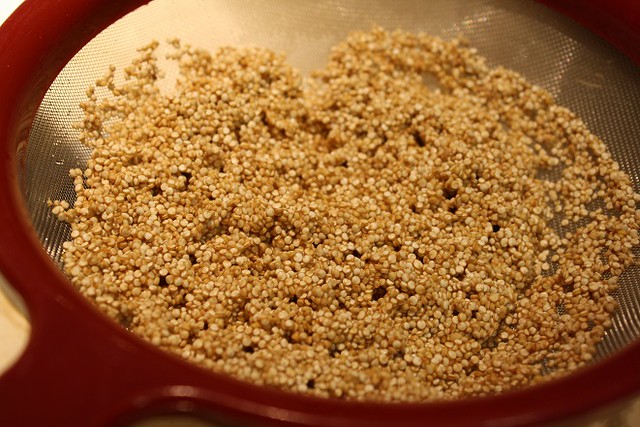 Start off by preheating the oven to 300 degrees. Then rinse 1/2 cup of quinoa with cold water. 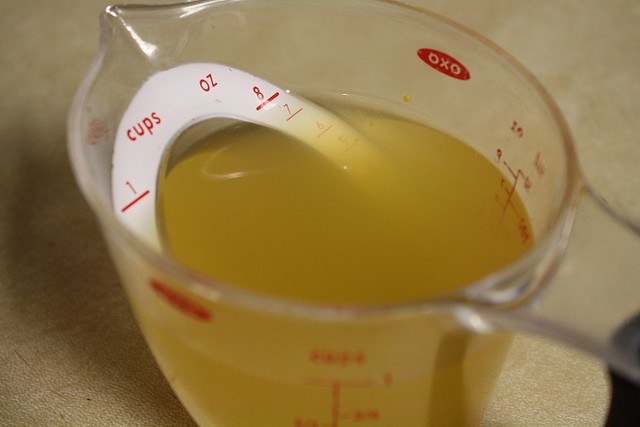 Measure out 1 cup of the chicken broth. 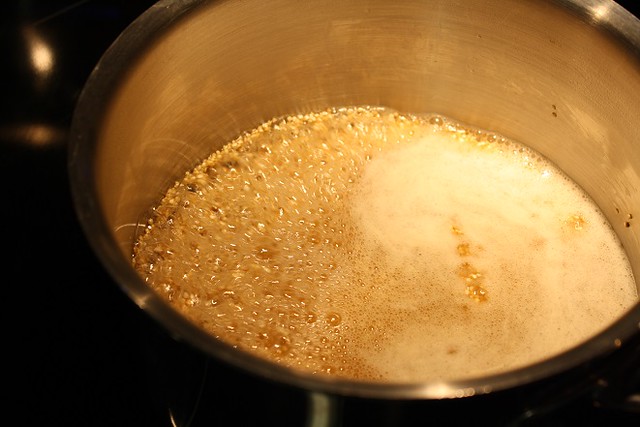 In a medium-sized sauce pan, bring the broth and quinoa to a boil. 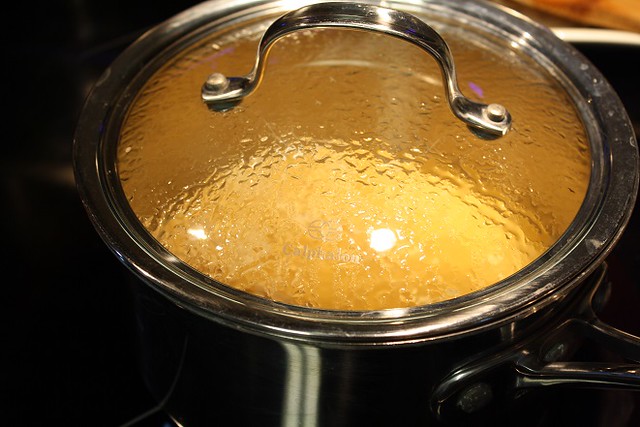 Once the quinoa is boiling, cover the pan and reduce the heat to low and let the quinoa cook for about 15 minutes or until the water is absorbed. 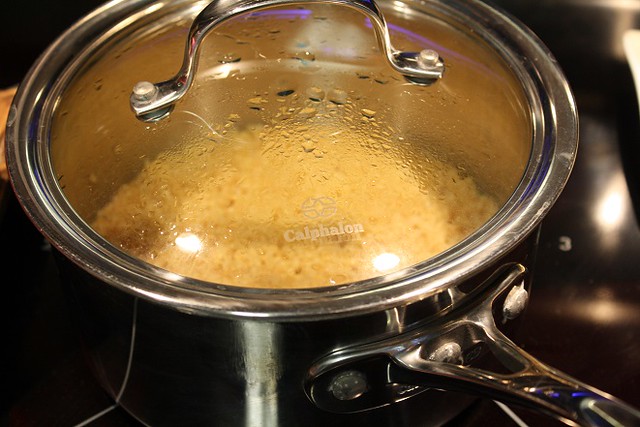 Once the water is absorbed, remove the pan from the heat and keep it covered for 5 minutes. 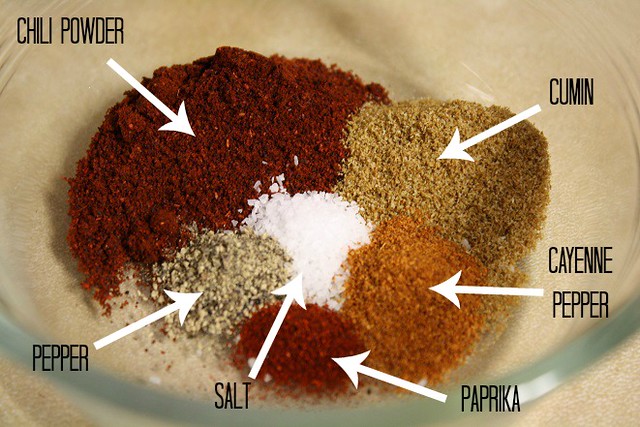 While the quinoa sits, measure out 2 teaspoons of chili powder, 1 teaspoon of cumin, 1/4 teaspoon each of pepper, salt, and cayenne pepper, and finally 1/8 teaspoon of paprika. 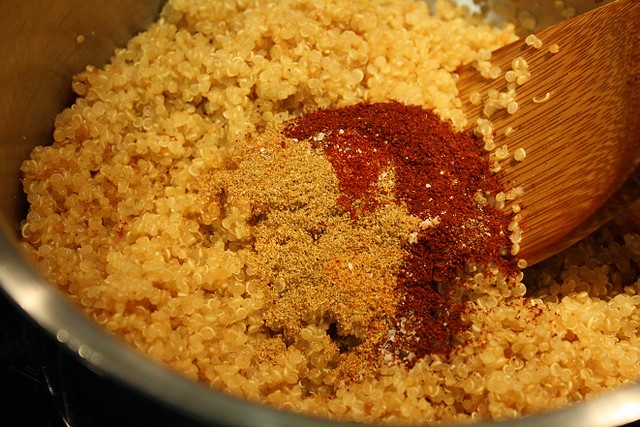 Once the quinoa is done sitting, fluff it with a fork and then add the spices to the quinoa. 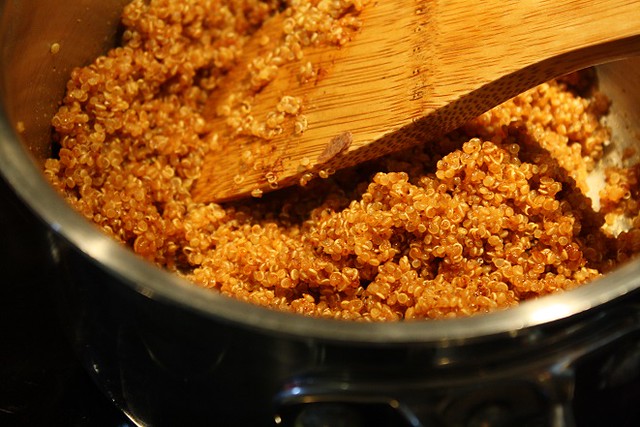 Stir the quinoa so the spices are mixed in. 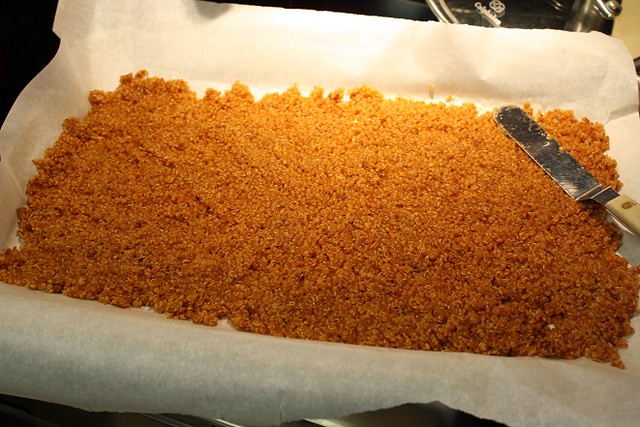 Line a cookie sheet with parchment paper and spread the quinoa into a thin layer and bake for 25-30 minutes until the quinoa is lightly toasted. 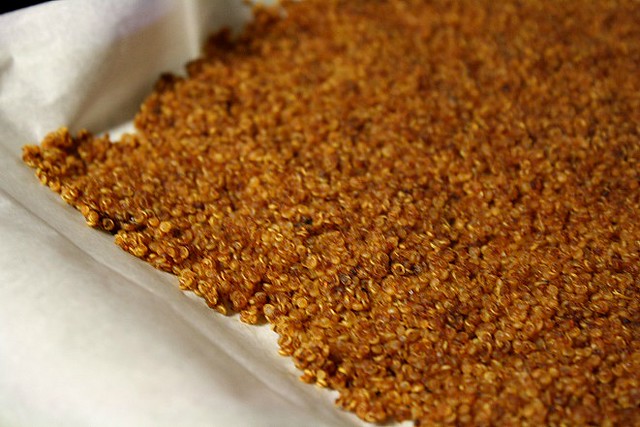 Here’s the quinoa after baking. 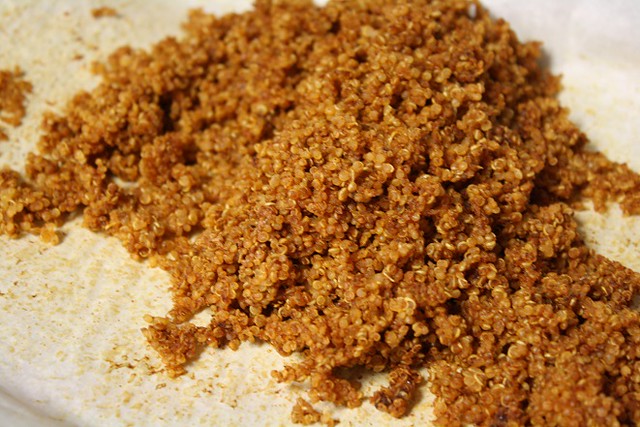 Use a spatula to scrape up the quinoa and make sure it isn’t in large chunks. 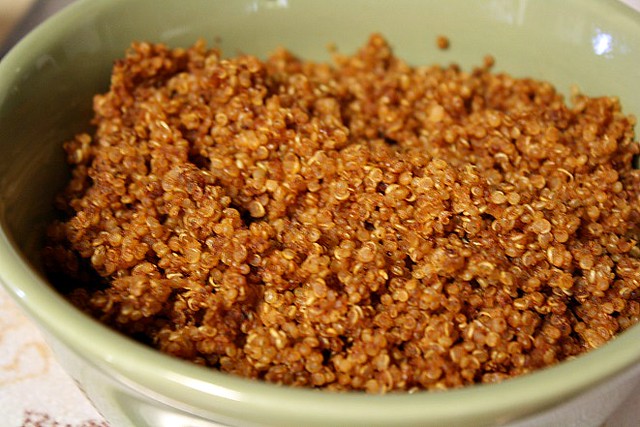 Then move the quinoa to a bowl and refrigerate until you’re ready to use it. 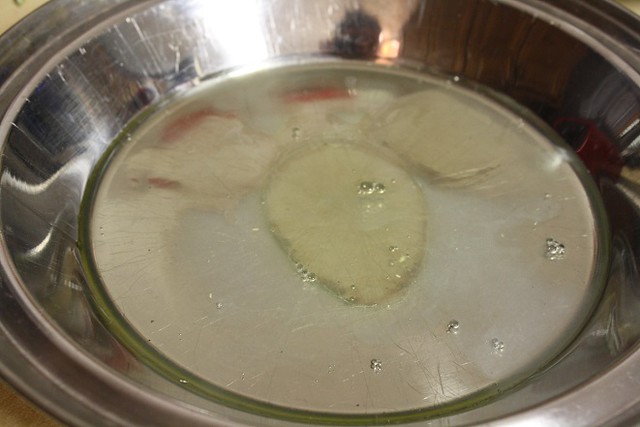 When you’re ready to start working on the chicken, turn the oven up to 400 degrees. Then grab 2 shallow pans. In the first one add 2 egg whites and a tablespoon of fresh lime juice. 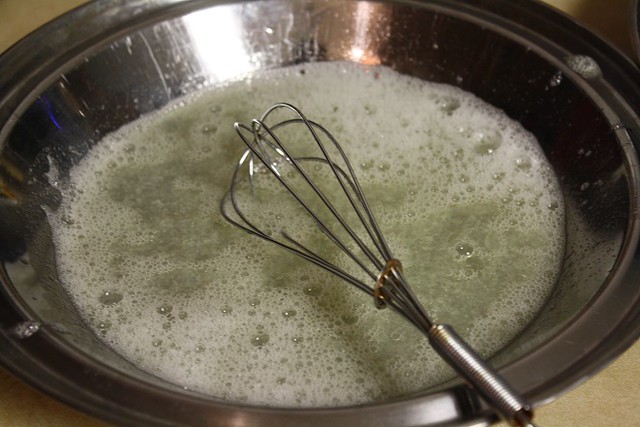 Then whisk the egg whites until they’re well combined. 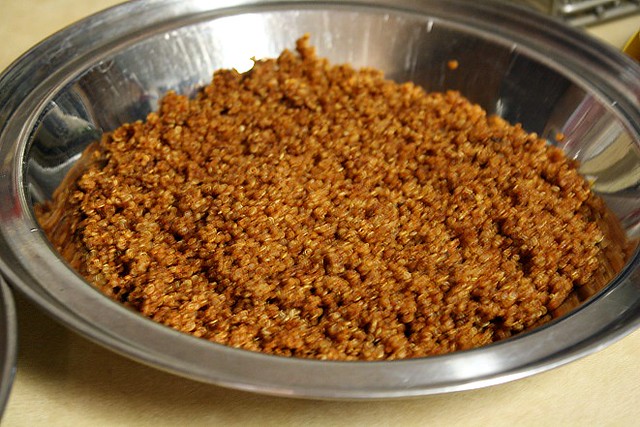 In the second shallow pan, add the quinoa. 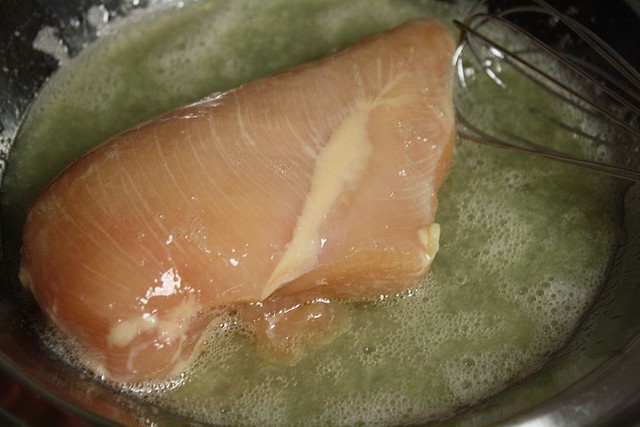 One at a time, place the chicken breasts into the egg white mixture and make sure it’s well coated. 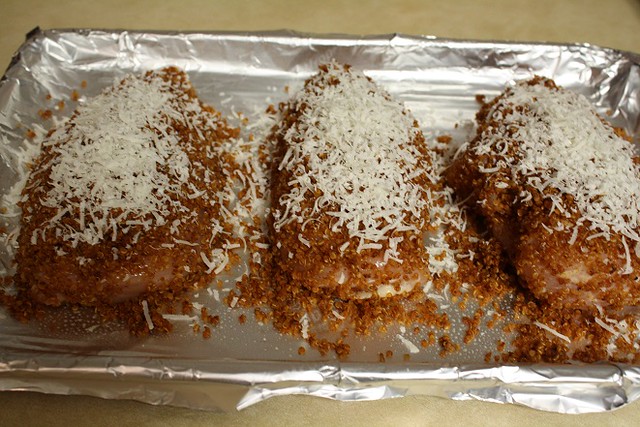 Then move the chicken to the quinoa and either use your hands or the back of a spoon and press the quinoa into the chicken so it’s completely coated. Transfer the chicken to a cookie sheet that has been lined with foil and sprayed with cooking spray. Finally grate (or use pre-grated) Parmesan cheese (about a tablespoon of cheese per chicken breast) over the top of the chicken. Bake the chicken for 25 minutes. 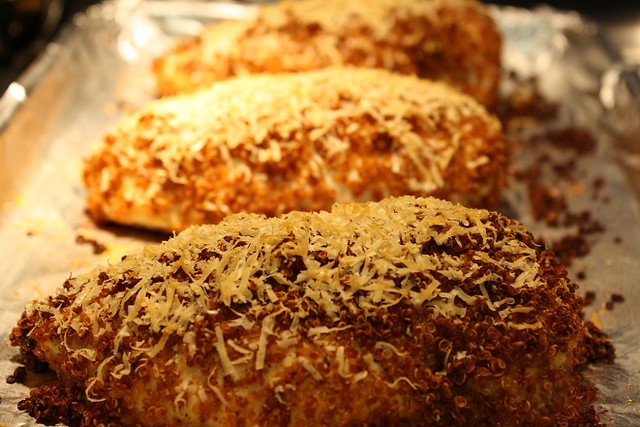 Remove the chicken from the oven and let me warn you here…it smells and looks amazing. Serve it while it’s still hot and enjoy! You will LOVE how crunchy the quinoa crust is. Happy toasting!

Preparation Instructions:
1. Preheat the oven to 300 degrees. Then it’s time to cook the quinoa. To do this you first rinse the quinoa in cold water and then bring the broth and quinoa to a boil. Once boiling, cover the quinoa with a lid and let it simmer over low heat for about 15 minutes or until the water has been completely absorbed.

2. Remove the quinoa from the heat let it sit for 5 minutes. Then add the cayenne pepper, chili powder, cumin, paprika, salt and pepper spices to the quinoa and combine. Line a cookie sheet with a Silpat or parchment paper. Spread the quinoa in a thin layer and bake for about 25-30 minutes. You’re looking for the quinoa to be lightly toasted. Once the quinoa is toasted, move it to a boil (breaking up any large clumps) and cool it in the refrigerator until you’re ready to use it.

3. Once you’re ready to get the chicken cooked, change the oven to preheat to 400 degrees. Grab 2 shallow pans. In the first you’ll need 2 egg whites and a tablespoon of fresh lime juice and whisk it together. In the second pan add the quinoa to it. Finally line a cookie sheet with foil and spray it with cooking spray.

4. Time to work with the chicken. Dip each chicken breast first in the egg white mixture. Then place the chicken in the quinoa. I found my hands worked well to pat the quinoa on all sides so that it was well coated. You could also use the back of a spoon.

5. Place the chicken coated in quinoa on the prepped cookie sheet and add a tablespoon of Parmesan cheese (you can grate your own or use pre-grated Parm) on top of each chicken breast. Bake in the oven for 25 minutes and then remove. Serve the chicken while it’s still hot and enjoy!