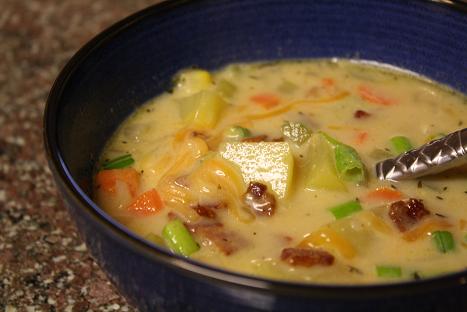 (Recipe can be found on the site You Made That? here.) For this warm-you-to-the-core soup, the following ingredients are needed: Salt and Pepper, Dried Thyme (or fresh Thyme if you have it on hand), 3 large Yukon Gold Potatoes, Half and Half (I opted for the fat-free variety), Chicken Broth (32 oz. total), one medium Onion, about 2 Carrots and 2 Celery Stalks chopped, 4 strips of Bacon, Green onions  for the topping, Frozen Corn, Ground Cumin, and Butter. Before I did anything, I got the chopping out of the way. My potatoes weren’t very big, so I cut up about 5 of them into bite-sized pieces. Then I diced 1 onion, and chopped 1/2 cup each of carrots and celery stalks. Whew, glad that was out of the way!

To begin, heat a large pot to medium. Then using those handy kitchen shears, cut 4 slices of bacon into 1/2 inch pieces into the pot. Then cook that bacon until it’s nice and crispy. (Seriously, someone needs to invent smell-a-vision photography and computers.) Once crispy, place the bacon on some paper towels to drain and pour the bacon drippings in a separate container. Moving on to the soup…melt two tablespoons of butter in that same pot. Add the onions, carrots, and celery to the melted butter and cooked for about 10 minutes until they were tender. Then it’s time to add the spices including 1/2 teaspoon of dried thyme leaves (or 1 tablespoon of fresh thyme), 1 teaspoon of ground cumin, and salt and pepper. The corn, potatoes, 1 cup of water and 32 ounces of chicken broth are then added. Bring the soup to a boil, cover it, and reduce the heat to low. Allow it to simmer about 10 minutes. Now the blender makes an appearance. Ladle 2 cups of the soup in a blender… …and blend it until smooth. The blended soup then gets added back to the pot along with 1/2 cup of half and half and the soup is removed from the hot burner. Then it’s time to eat. Serve it garnished with your choice of green onions, cheese, sour cream and that glorious bacon you cooked earlier and Enjoy!! Preparation Instructions:
1. In a 6 quart pot on medium, cook bacon until crisp. Remove bacon to paper towels, and pour off bacon drippings.

3. Pour 2 cups soup into a blender and puree until smooth. Return to pot and add the half and half stir and remove from heat.

Garnish: with bacon, green onions,cheese and or sour cream