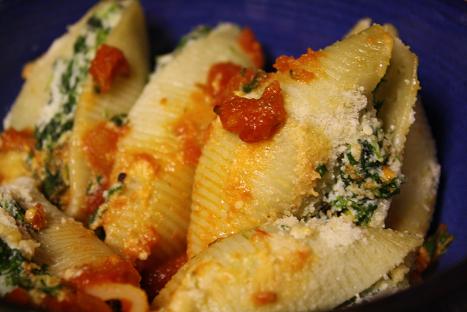 (Recipe can be found on the Spoon Fork Bacon site here.) Begin by preheating the oven to 350 degrees. Then fill a large pot with water and bring it to a boil. Once boiling, cook the pasta shells according to the package’s directions. While the pasta was cooking, I began thawing the spinach by getting a fine mesh strainer. I then ran fairly warm water over the block of frozen spinach until the spinach began to thaw. Once thawed, I squeezed as much water out of the spinach and set it aside to drain. I repeated this process with the second box of frozen spinach. Next up, I removed the peel from the shallot and finely chopped it for the filling. At this point, my shells had finished cooking. I drained them, poured about 2 tablespoons of olive oil over them, and carefully stirred them so that they were lightly coated with oil and wouldn’t stick to one another. Then I set them aside to cool a bit until the filling is finished. I then sprayed an 8″ x 8″ glass pan with cooking spray. I poured about 1 cup of marinara sauce in the bottom in the pan and made sure that it fully coated the bottom. The time had come to assemble the filling. In a large glass bowl, I added the ricotta, thawed and drained spinach, shallots, thyme, 1 egg, and salt and pepper to taste. Using a spatula, I folded the ingredients together until they were well combined. Then it was time for the fun part…filling the shells. I took a large soup spoon and spooned the filling into each shell and lined them up in the pan. I did 5 rows of 5 and had just enough filling. It worked out perfectly. I love this photo – I feel like the shells are giving me a standing ovation for having successfully filled them! The cheese and edges of the pasta should start to get slightly brown. Let the pasta sit for about 5 minutes to cool and then serve. Here is the dish the day I made it…delicious!! Below is a photo of my leftovers. I put the shells into a bowl and spooned some of the extra marinara sauce I had in the refrigerator over the top and sprinkled some shredded mozzarella cheese over the top. The pasta was perfect and totally hit the spot after heating in the microwave for about 2 minutes. I hope you make this dish and enjoy!! 2. Bring a large pot of water to a boil.

3. Add the pasta, as well as a generous amount of salt, and stir.

4. Cook the pasta until al dente, about 15 minutes.

5. Drain the pasta and toss with olive oil. Set aside.

6. Pour the marinara sauce into a 8”x 8” baking dish and move around to form an even coat.

7. In a mixing bowl, combine the filling ingredients and stir together well. Season together with salt and pepper.

8. Using a spoon, scoop a small amount of the filling and stuff into a pasta shell.

9. Nestle the stuffed shell into the baking sheet and repeat with the remaining shells until the baking dish is filled.

10. Top the baking dish with a sprinkle of parmesan.

11. Tightly cover the baking dish with aluminum foil and bake for 20 minutes.

12. Remove the foil and continue to bake for an additional 5 minutes or until the parmesan begins to bubble and lightly brown.

13. Remove from the oven and allow to rest for 5 minutes before serving.