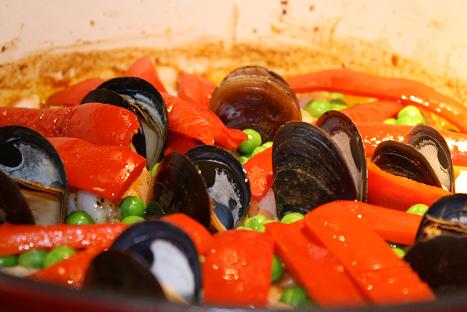 Knowing that Easter was this week, it was pretty easy for me to come up with a dish that I wanted to try. When I was planning this week’s blog, the first dish that came to mind for Easter may not be what you would traditionally think of when conjuring images of Easter dinner. I opted for a lovely Paella dish, because my aunt used to make it every other year for several years when she would host Easter dinner. Since she’s passed away, I don’t think I have had paella again. This blog seemed like the perfect opportunity to both eat paella once more and try this colorful, slightly exotic (and expensive) dish for myself. I splurged a bit for nostalgic reasons, and it was well worth it. Let’s talk Paella for a moment. This is a Spanish dish and you can click here for a little history on the dish. Ultimately, they say: Paella was originally a laborers’ meal, cooked over an open fire in the fields and eaten directly from the pan using wooden spoons. Seafood is rare in the fields of Valencia, which is why they used chicken, rabbit, duck and snails.

My aunt was a Spanish teacher, a seasoned traveler,  and you should know that rabbit, duck, and snails did not star in her paella. I recall chicken wings (bone-in), shrimp, and the ever-popular (or not) crayfish. Sometimes when there might be a bigger crowd to feed, she’d add some scallops and chicken thighs (bone-in) as well. It was a real treat and I was a big fan of her paella. However, the bones in the chicken and the crayfish were my least favorite parts of the meal, but I easily looked past those things for the overall flavor. My aunt and I bonding many years ago. I miss you Aunt Madge. 🙂

So in honor of my awesome aunt, who we miss every day, I tackled Paella. I am visiting my parents this week since Easter is coming up, so it was fun to share this dish with them since we all had the same memories of Paella. My mom brought a great recipe to my attention that America’s Test Kitchen cooked on a show she watched a while back. Here is what I particularly loved about it: the chicken it calls for is boneless and skinless (score!) and there is no mention of the word crayfish, crawfish, or any other creepy shelled creatures that would be staring at me from the pot as I ate at the table. Just for those two facts, I was game.

The proteins in the recipe I used were boneless, skinless chicken thighs, shrimp, spanish chorizo (a spanish type sausage), and mussels. The chorizo I used was not in a casing, but if you get the kind in a casing it would still be awesome and chorizo is becoming more readily available in most grocery stores.

I was particularly excited to cook with mussels for the first time, too. One tip I will give you is to get a few more mussels than the recipe calls for just to make sure that you have plenty of good ones to cook with. I had bought my groceries the night before, and while the fish monger said that mussels should be okay for 2-3 days in the fridge, I did find that a few of the 12 mussels I purchased were opened up when I opened the bag. When I tapped on the shell and looked back about a minute later some of them had closed back up, which means that the mussels are still alive and are good to cook with. Although 4 of the dozen did not close back up, so I decided to be safe and not use them. This dish turned out beautifully (both photogenically and in taste). My dad declared after the meal that it was a “gastronomic delight”, which was pretty awesome to hear on my first try!

If you’re feeling adventurous (and life is short, so why not be adventurous?), then click here for step by step instructions and the recipe.