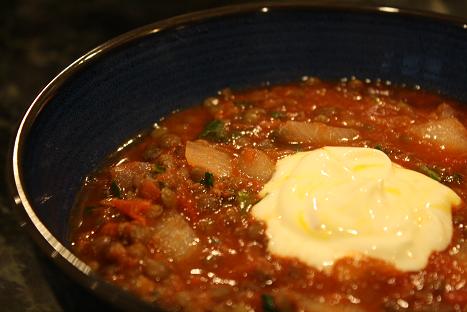 You are here: Home / Recipes / Diet / Healthy / Lively Up Yourself Lentil Soup (Recipe can be found at 101 Cookbooks site here.) To make this soup, pick up the following: 28 oz. Can of Crushed Tomatoes, 2 cups of Lentils (I’m using French Green Lentils), Extra Virgin Olive Oil, Salt, Kale (or another type of green that will hold up well in a soup…Heidi also suggests chard as an option), and a Large Onion. That’s it…great, right?! Begin by picking over the lentils and then rinse them well and drain them. I found these pieces to be very light-weight and not looking like a lentil, so you should be able to easily pick out what doesn’t belong in your dish. While the lentils drain a bit, bring 6 cups of water to a boil in a large pot. Once the water boils, add the lentils. Then cook the lentils at a high heat for about 20 minutes or until they are tender but still hold their shape. I stirred the lentils occasionally as I worked. Do keep an eye on them though to ensure you don’t overcook them to the point where they fall apart a bit. While the lentils cooked, I put together the saffron yogurt. Here is what you’ll need: Greek Yogurt (I used Fage’s fat-free Greek Yogurt), Saffron, and Salt. Time to boil some water. I used my electric kettle, which is a great item to have in any kitchen. Then measure 1 tablespoon of boiling water into a small bowl and add the saffron. Heidi calls for 30-40 threads, but Saffron is pricey so I didn’t use as much. You don’t get the bright orange color without it, so maybe next time I would use more. Then let the saffron steep for a few minutes in the hot water. While the saffron steeps, measure out 1/2 cup of yogurt and put it in a bowl. Then pour the saffron water (threads and all) into the bowl with the Greek Yogurt. Stir it up and then add a couple of pinches of salt and stir again. Then set the mixture aside. While the lentils cooked, I also prepped my veggies. I began by rinsing some kale leaves and then cut out the vein as you see above, which I discarded. Then I finely chopped up the kale until I had 3 cups and set it aside. I moved onto the onion and chopped one large onion as you see above. Around this point, the lentils were finished, so I drained them and cleaned out my pot so I could use it again. (You could always use a separate pot to cook the soup and lentils in to speed things up a bit.) You’ll notice that they absorbed most of the liquid while cooking. Then I added a tablespoon of olive oil to the pot and heated it over medium heat. Once the oil was hot, I added the onions and 1 teaspoon of Kosher salt to the oil and stirred it up for a couple of minutes so that the onions could soften. Then add one 28 oz. can of crushed tomatoes, 2 cups of water, and the cooked lentils to the pot and stir it around until it’s simmering. Once the soup has been heating a couple of minutes, add the chopped kale. I really love this photo for some reason. Stir the soup around until it’s well incorporated. Then cook the soup for a few minutes and serve. That’s it. Ladle it up and put a bit of the saffron yogurt (or whatever topping you’d like…see the variations listed in the recipe section below for inspiration) on top and enjoy. Oh so tasty!! Preparation Instructions:
1. Bring 6 cups of water to a boil in a large saucepan, add the lentils, and cook for about 20 minutes, or until tender. Drain and set aside.

2. While the lentils are cooking, make the saffron yogurt by combining the saffron threads and boiling water in a tiny cup. Let the saffron steep for a few minutes. Now stir the saffron along with the liquid into the yogurt. Mix in the salt and set aside.

3. Meanwhile, heat the oil in a heavy soup pot over medium heat, then add the onion and salt and sauté until tender, a couple minutes. Stir in the tomatoes, lentils, and water and continue cooking for a few more minutes, letting the soup come back up to a simmer. Stir in the chopped greens, and wait another minute. Taste and adjust the seasoning if need be. Ladle into bowls, and serve with a dollop of the saffron yogurt.

Variations:
– You can serve it with a poached egg on top,
– or crunchy, fried shallots,
– with a drizzle of chive infused cream,
– or with chunks of tiny pan-fried butternut squash cubes.
– Make a thicker version by using just a bit of water, and then spoon it over an omelette in the morning.
– Have some cooked farro or wheat berries around? Toss some in. Millet might be good too.
– You can finish the soup by adding your favorite spices or spice blends. Smoked paprika, crushed chiles, toasted cumin, would all work nicely.