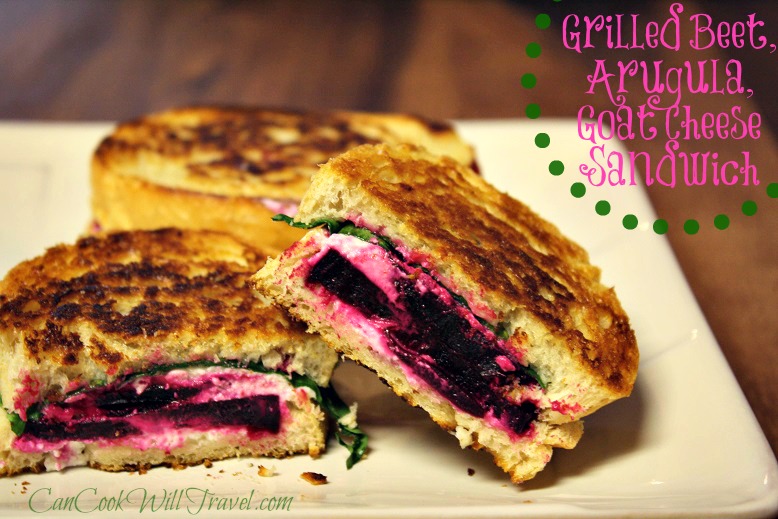 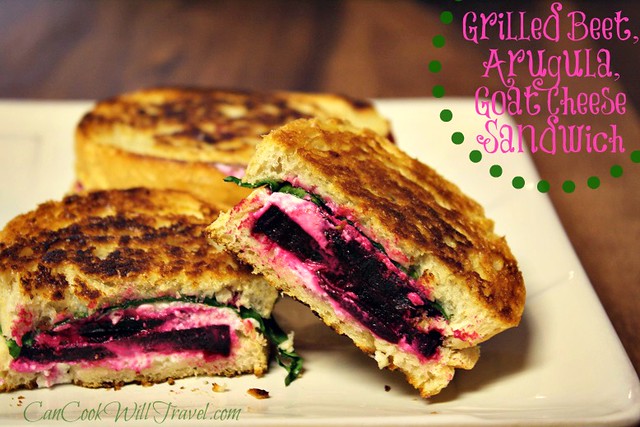 (Recipe can be found on the site BS in the Kitchen here.)
Step by Step Instructions: 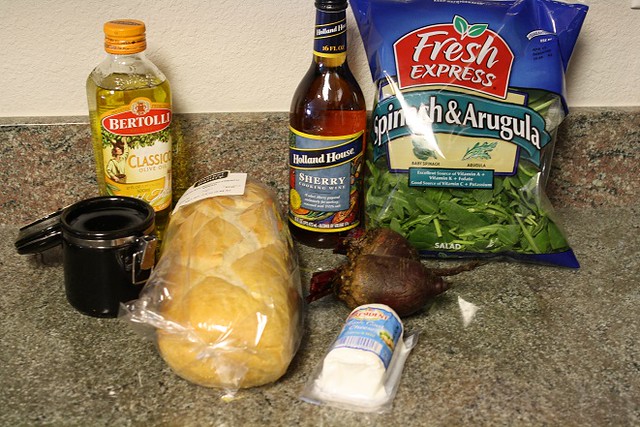 Grilled Beet, Arugula & Goat Cheese Sandwich can be yours with just a few ingredients: Olive Oil, French Bread, Sherry, Arugula (or a Spinach/Arugula combo in my case), 1-2 Beets, and Goat Cheese. [Not pictured is butter…sorry butter!] 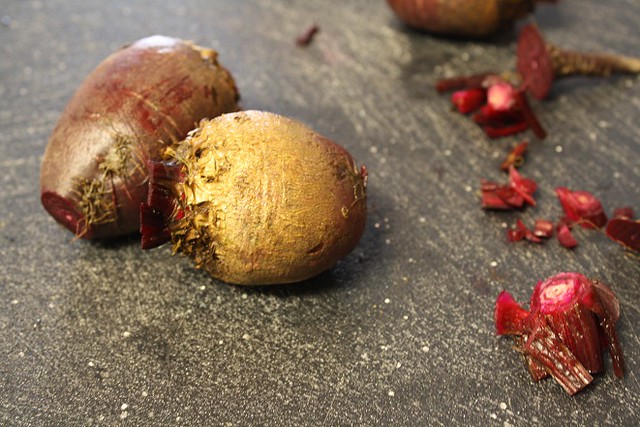 For starters you need to decide how you want to cook your beets. Here’s how I proceeded with that: Preheat the oven to 375 degrees. Cut off the stems and root ends of the beets. 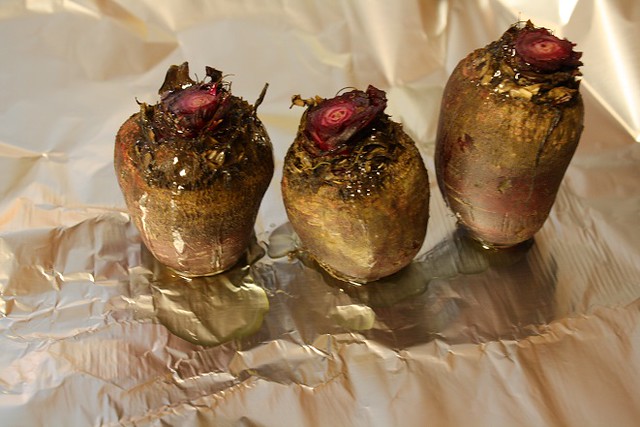 Then place the beets on a sheet of foil and drizzle with olive oil. (I had 3 beets so I decided to cook them all at once, but you only need 1 or 2.) 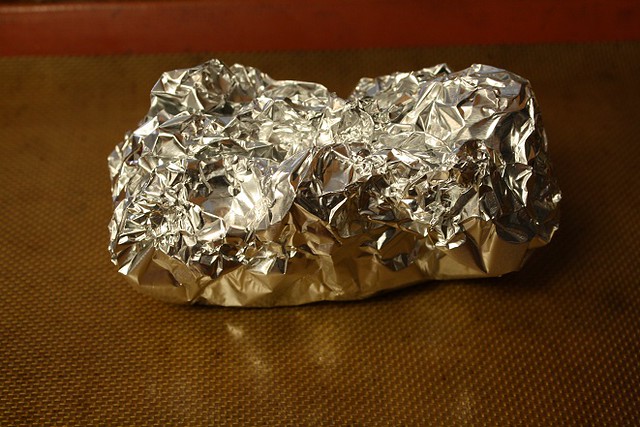 Tightly wrap the beets in the sheet of foil and bake in the oven for at least an hour. You’ll want the beets to be tender when pierced with a knife. 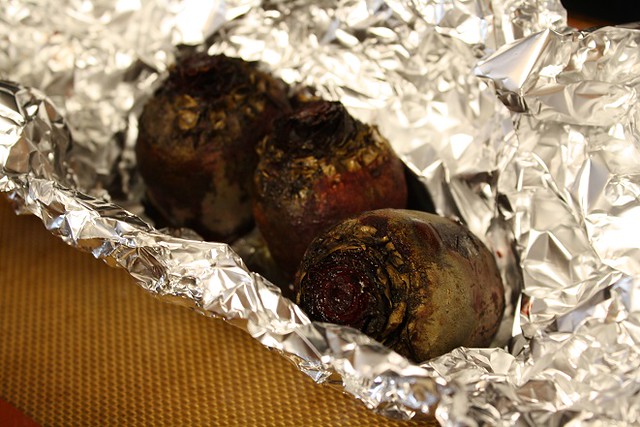 Here are the beets after about an hour of baking. Let them cool completely. 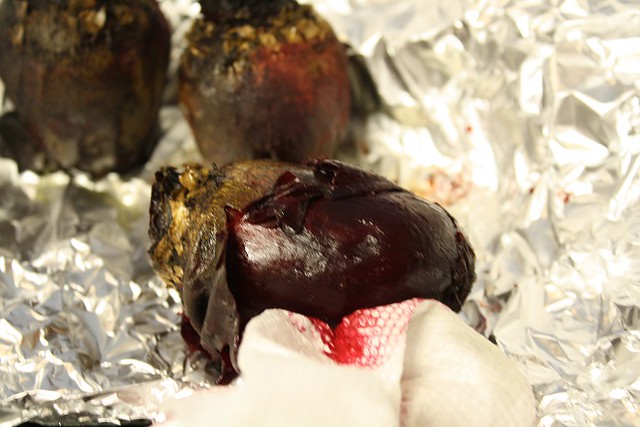 Peeling these guys is a cinch once they are cool. Grab a paper towel and rub around the root end to release the skin which will easily peel off. 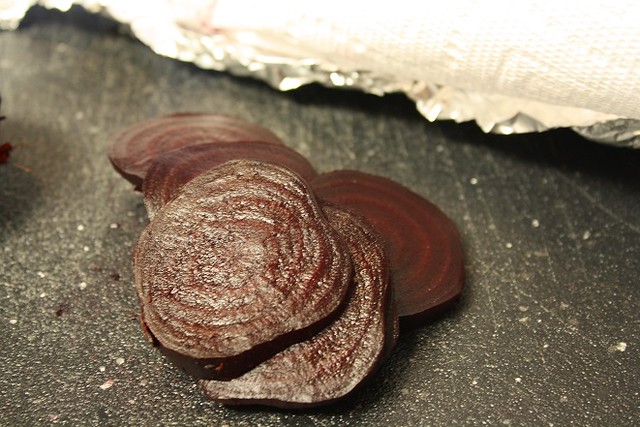 Then slice up the beets thinly. 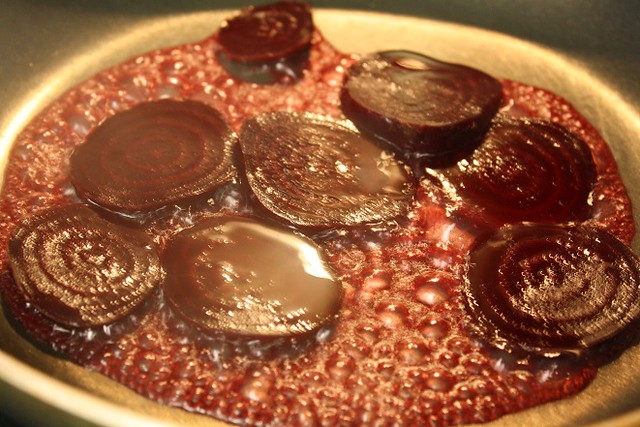 Heat a skillet over medium-high heat. Then add the beet slices along with 1/2 an ounce of sherry and stir… 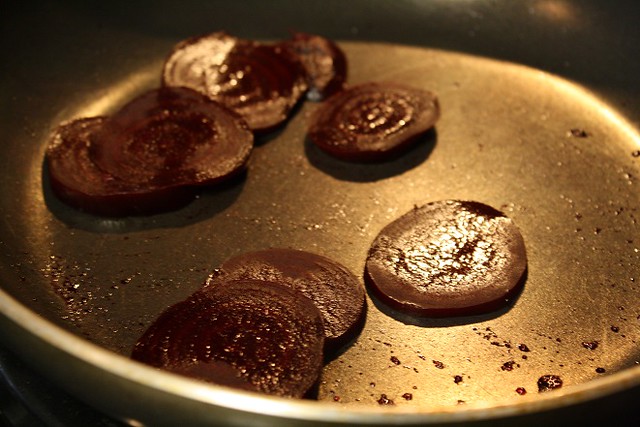 …and continue cooking until the liquid evaporates. 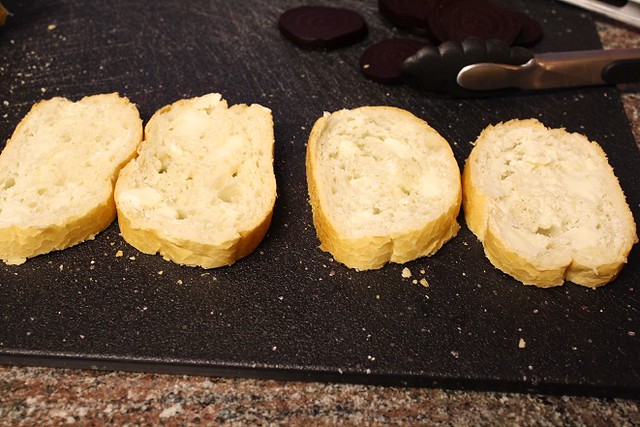 Depending upon how many sandwiches you’re making, grab the appropriate number of slices of French bread. Butter one side of each slice and then flip them over so the buttered side is face down. 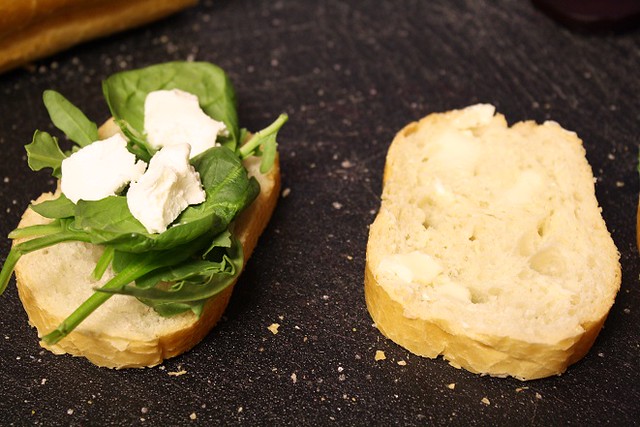 Add a good amount of arugula (next time I’ll add more), and top with a few dollops of goat cheese. 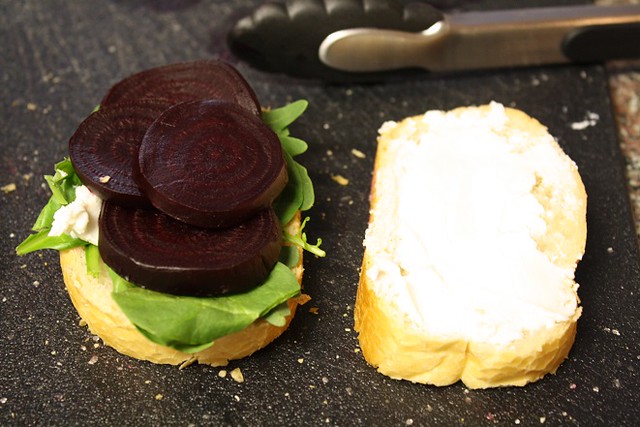 Then add a few beet slices and slather the other piece of bread with your glorious goat cheese and put the sandwich together. 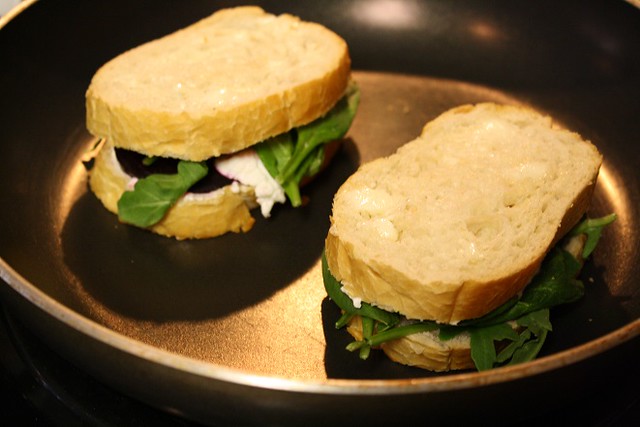 Heat a skillet over medium heat. Once it’s hot add the sandwiches to the pan. Grill until the first side is golden brown. 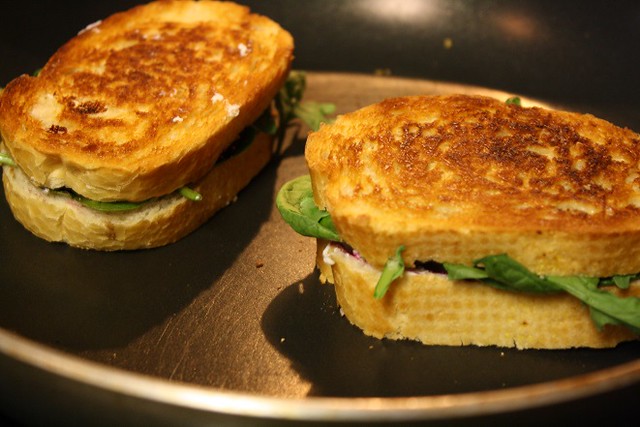 Then (carefully) flip and continue cooking until the other side is brown. Serve these up immediately and enjoy! Happy sandwiching!!

Preparation Instructions:
1. Begin by cooking your beets. The method I used was to preheat the oven to 375 degrees. Wash the beets and then chop off the stems and root end and place the beets on a sheet of aluminum foil and drizzle with olive oil. Wrap the foil tightly around the beets and bake for at least an hour or until the beets are tender. Then let them cool. Once the beets are cool use a paper towel to remove the peel.

2. Slice the beets and put them in a pan on medium-high heat along with about 1/2 an ounce of sherry. Cook until the liquid is evaporated. Then remove the beets from the heat.

3. Time to put together the sandwich. Butter one side of each bread slice. Then put a pile of arugula on an the non-butter side of the bread. Spoon some goat cheese on top of the arugula. Then add some beet slices. Spread boat cheese over the other piece of bread on the butter-free side. Place that bread slice on top to form the sandwich.