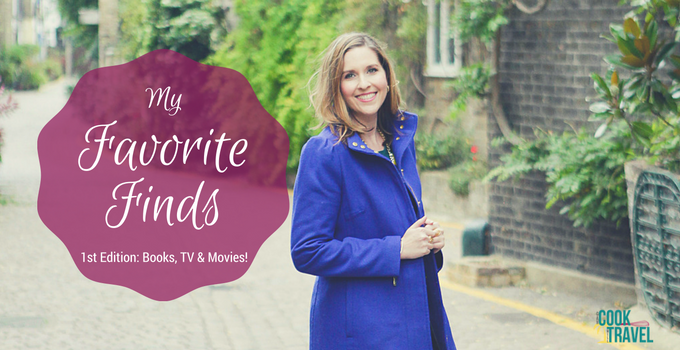 You are here: Home / Blog / Obsessing On / Favorite Finds – Entertain Me!

I’m starting a new blog series right now! Yep, this very minute. It’s called Favorite Finds, where I’ll be sharing fun discoveries from great books, movies, TV shows, to products and random things I’m enjoying. That way when I find super fun stuff, I have a place to share it with you. I’m a bit like an onion with all of my layers. Another term is multi passionate, a phrase coined by the oh-so-lovely Marie Forleo, for those of us who have tons of things we’re passionate about. So I’m not about to let you only see one side of me. Plus if you’re anything like me, you love to learn about cool new things and my favorite finds series is here to help!

In this first edition, I’m featuring some great books, movies, and TV shows I’ve been enjoying. I have a feeling you’re going to like what you find here. There’s definitely a theme of thrilling books and shows along with some faith mixed into this post. Lately I’ve been reading quite a bit, which is great. I feel like I go through waves where I read fiction only or personal development only. But I love both and didn’t want to give up one or the other. So I’ve been trying to read a fiction book and a personal development book at once. So far, it’s going pretty well.

As far as fiction goes, I really love to read books that are being made into movies. And if I can read them before seeing the move, it’s even better. I prefer doing that because the movie can’t really cover everything in the book. This way you go in with a little back story.

When The Girl on the Train trailer came out, my awesome friends Nicole and Jamie told me I HAD to read it. Jamie leant me the book by Paula Hawkins, and I dove in. Per usual, the book is better than the movie, but I still thought they did a good job interpreting the book. Since the book follows the viewpoint of 3 women, making it flow well is certainly a task for a film. Overall though, I enjoyed the movie but the book even more so.

And I love, loved the latest personal development book I picked up. It was recommended by an entrepreneur I follow, who said Gabby Bernstein’s new book was worth checking out. I looked into The Universe Has Your Back and it sounded like something so many of us could use. It’s about how we can start living our lives based in love rather than fear.

This book is a great read if you’re looking for a book with action steps, exercises, guided meditations, and examples. And I found that as I read it, I absolutely started to handle different situations and thoughts with a more positive, loving approach rather than letting them stress me out as easily could. Holy smokes, Fall TV is KILLING it right now! There are so many great shows on it’s a bit crazy. I’m just highlighting the new shows, as we all have our favorite returning series.

As far as comedies go, I’m loving NBC’s The Good Life. This show really funny and also a bit politically incorrect even though it’s set in the After Life. And if it stars Kristen Bell, then I’m usually hooked. (She’s had me as a major fan ever since Veronica Mars.) Plus it’s great to see Ted Danson in a comedy again, because I loved him in Cheers!

No Tomorrow is another great comedy airing on the CW. It’s really funny, quirky, and smart. The show centers around a woman who lives the straight and narrow path. She encounters a rather free-spirited, (handsome) fella who faithfully believes the world is ending in 8 months. He’s determined to live the remaining days to the fullest. Trying to get her to do the same is where the comedy comes in. It’s really cute!

I love a good drama. Pitch, Designated Survivor and Notorious, are perfect examples of great new dramas this season. But 2 shows are really standing out to me lately and they both share the time travel theme. You have Timeless on NBC, which has a small group traveling back in time to stop a potential threat from changing history. It’s been fun so far to watch them feature the Hindenburg and Lincoln’s assassination.

The second show is Frequency on the CW. I cannot say ENOUGH great things about this show. The TV series is a spin off of the movie with the main character being a woman this time. And if you haven’t seen the movie, well it’s really good, so go check it out. The TV show carries the same them of a woman contacting her father 20 years earlier using his old radio and warning him of his impending murder to try to prevent it. I’ve gone to a ton of movies in the theater in the past few months. And that makes my heart SO happy! I love going to the theater, and I also love watching movies at home too. Whenever I discover a great flick, I love to share it with everyone I know. So naturally movies are the perfect Favorite Finds feature for this movie-aholic!

So in the past several weeks, 3 movies have really stuck out to me. The first is Hell or High Water. Chris Pine and Jeff Bridges star in this movie, which I’d never heard of it but had amazing reviews, so off I went on a movie date to check it out. Still several weeks later, we’re still talking and thinking about this movie. The movie leaves an impression on you. I won’t share too much other than it’s about modern day Texas brothers who are robbing banks, and the Texas Rangers who are chasing after them. So freaking good!

Then last weekend my friend Nicole and I did a little double feature to celebrate her birthday and catch up. Both movies are stellar and based on true stories! First up was Deepwater Horizon with Mark Wahlberg and Kurt Russell. It’s about the manmade BP oil disaster that happened in the Gulf a few years ago. I had no idea of the back story. I hate movie spoilers, so I won’t dare spoil it for you. Just know it’s intense, well acted, and will have you on the edge of your seat!

The second movie was Sully. This flick is about the epic water landing of a US Airways plane in the Hudson. I heard it was great but you wonder how much you can really get into it, since you know what happens? I mean . . . everyone lives! But this is more the story of the after effects of the event, and what is on the line for Captain Sully. Tom Hanks was wonderful, as you’d expect, and Aaron Eckhart was really great in it too. You’ll love Sully!! Alright there are a TON of things I just had to share with you, and I hope you find one (or three) of my favorite finds to check out ASAP. Life is short, so there’s no need to waste it on bad movies, TV, or books! Haha!

What are some of your current Favorite Finds? I’d love to hear what you’re loving right now?? Any great reads and shows that you have enjoyed? Let’s chat about it!