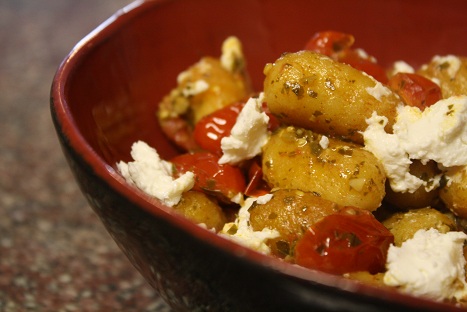 When you’re talking about gnocchi, the word fast isn’t typically used. When I was first beginning this here blog, I took on the task of making gnocchi from scratch. It was such a fun experience, but let’s be honest…it isn’t every day that you have the time (or energy) to whip up some gnocchi. In case you’re not familiar with gnocchi, check out my homemade gnocchi culinary adventure from last year to learn more. I do occasionally purchase pre-made gnocchi in the pasta aisle at my local grocery store, and then I boil it up (as the package suggests) and serve it tossed in a spicy tomato sauce, and it’s pretty good. But then I was playing on Pinterest one evening recently and found myself at a site called Iowa Girl Eats. Being a Midwestern girl myself, I was intrigued by what she was cooking up. I did a search and came across a gnocchi dish that seemed interesting but potentially challenging, so I knew I had my next dish.

Here’s the deal…the dish features pre-made gnocchi but it has you sauteeing it in a pan on the stove top rather than boiling it. Fresh gnocchi is delicious this way, but I had to see for myself if this was going to work with the store-bought variety. Guess what my friends? It actually worked and was so delicious! So let’s talk about how the dish comes together. There are only a few things you need a few ingredients that are needed, including gnocchi, grape or cherry tomatoes, goat cheese, pesto (I used jarred pesto but you can of course make your own), garlic and olive oil. Once the garlic and olive oil are heated and the garlic is removed, I added the gnocchi and browned them in the oil. It was pretty cool, because the gnocchi had a somewhat crispy outside but were nice and soft inside…delish! Then the tomatoes are added and cooked for a couple of minutes, the pesto gets added and the dish is topped with goat cheese. That’s it folks…all that’s left is enjoying.

You’ll definitely want to try this dish out, because it is not only crazy easy and super fast, but it’s also a great way to pump up pre-made gnocchi and take it to the next level. Click here for the recipe along with step by step instructions.

What I was cooking up a year ago: Homemade Croissants…Am I Crazy?!

This time last year I took on a huge challenge and made my own croissants from scratch…yes, you read that right. It was a serious undertaking, but the end result was pretty good for my first attempt. I’ll definitely be trying these out again, and hope they taste as good as they did the first time!