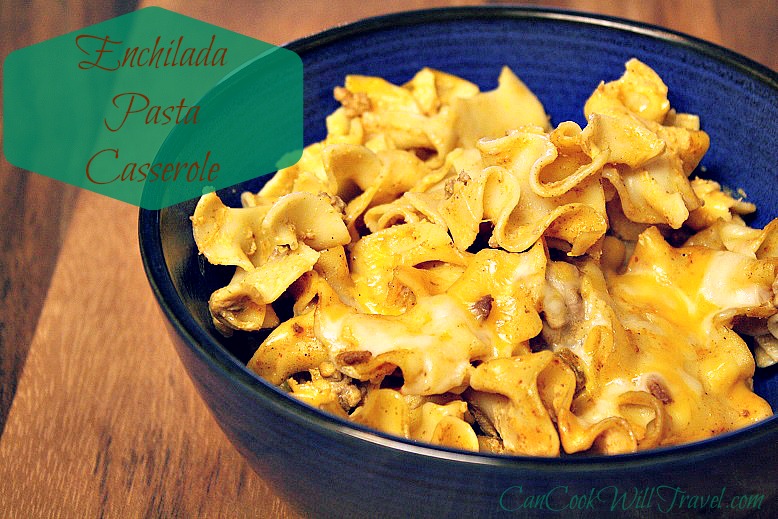 (Recipe can be found on the site Table for Two here.)
Step by Step Instructions: First off, preheat your oven to 350 degrees. Then get some water boiling in a large pot. The only type of prep work I did was to measure 1/4 cup of sour cream and I weighed out 5 ounces of cream cheese. Then it was time to cook the egg noodles according to the package instructions. While the pasta cooked, I started browning the ground beef in a large pan. Once the beef is cooked and browned, I drained the grease from the pan. Then add the 5 ounces of cream cheese to the beef and stir it about until it starts to melt into the beef. At this point the cheese had melted a bit and was combined with the meat. Then add the sauce mixture to the pan. Stir everything up and let it simmer for 2-3 minutes. Add the cooked pasta to the pan… …and combine all of the ingredients. Pour the pasta and meat mixture into a large baking dish that was sprayed with cooking spray. Then top it with the remaining 1/2 cups each of sharp cheddar and monterey jack cheeses. Bake the casserole for 15 minutes or until the cheese is melted. Then dig in. I am telling you this was so delicious and the bit of heat was well balanced with the pasta and corn and the meat. Yum, yum! Happy baking!

2. In a large pot, bring water to boil and cook egg noodles according to package instructions.

3. In the meantime, in a very large skillet, brown your ground beef then drain the fat. Then add the chili powder, cumin, and cayenne pepper. Stir to combine.

4. Add in the cream cheese until melted and combined.

6. Pour mixture over the beef and let simmer for 2-3 minutes.

7. In the meantime, drain your pasta. After you’ve drained it, add the pasta to the beef mixture. Make sure everything is coated in the sauce.

8. In a large casserole dish, pour in the pasta mixture and top with the remaining cheese.

9. Bake for 15 minutes or until cheese has completely melted.

10. Serve hot. Keep in airtight container for up to 1 week.