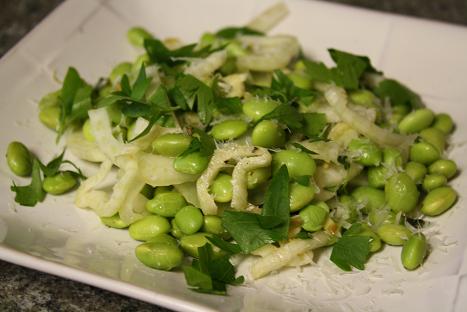 (Recipe can be found on The Parsley Thief site here.) Begin by bringing 6 cups of salted water and 1 star anise to a boil. (Isn’t the star anise a gorgeous ingredient?) While the water comes to a boil, I cleaned the fennel and removed the stalk and leaves from the fennel bulb. Then I cut the fennel in half and very carefully I cut out the core. At this point, the water began to boil… …so the edamame gets added to the water. Once the water begins boiling, boil the edamame for 3-5 minutes or until tender. (Three minutes worked for me.) Meanwhile, as the edamame cooked, I thinly sliced the fennel halves. After 3 minutes passed, I drained the edamame and removed the star anise. The edamame and fennel get mixed together and set aside. At this point, it’s time to make the dressing. Measure out the olive oil, fresh lemon juice (about half a lemon), salt, pepper, and fresh savory (or thyme in my case). Then whisk the mixture until it is well emulsified. Then pour the dressing over the edamame and fennel and combine the mixture. Finally dish up the salad and top with roughly chopped parsley and grated Parmigiano-Reggiano. Yum!! Preparation Instructions:
1. Bring the salted water and star anise to boil in a medium saucepan.

2. Stir in the edamame; return to a boil and blanch for 3-5 minutes, or until just tender.

3. Drain and remove the star anise.

4. Meanwhile, remove the stalks and core from the fennel bulb; slice very thinly.

5. Add to a mixing bowl, along with the edamame.

7. Pour dressing over the salad and toss to combine.

8. Divide the salad among 4 serving plates and garnish with the Parmesan and parsley.