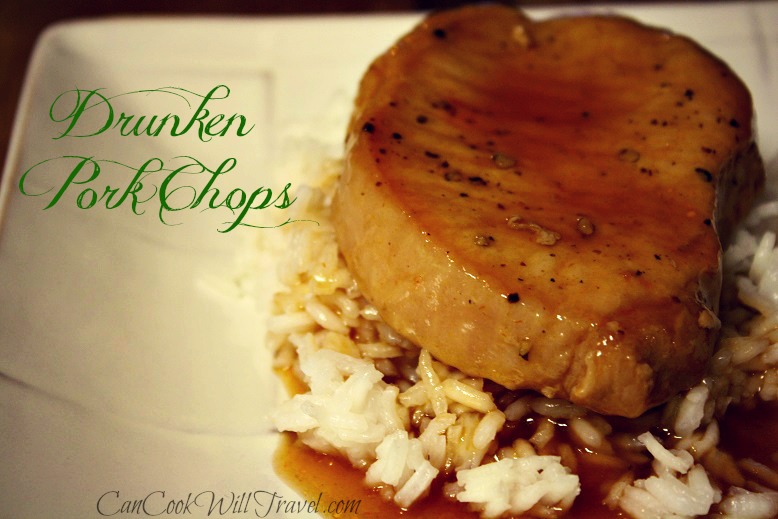 (Recipe Can be found on the site Siggy Spice here.) These Drunken Pork Chops can be yours with the following ingredients: Salt & Pepper, 1 bottle of your favorite dark Ale, Ketchup, 5-6 Pork Chops (bone-in works too), Corn Starch, Olive Oil, and Brown Sugar. You’ll want a large sauce pan to cook the pork chops in, because this is a one pot dish. Heat about 1 tablespoon of olive oil over medium heat. Season both sides of the pork chops with salt and pepper and brown each side. While the pork browns, grab the ingredients for your sauce. 1 bottle of dark ale (I went with a Sam Adams Octoberfest because it’s what I had on hand…just avoid going as dark as Guinness), 1/2 cup of brown sugar, and 1/3 cup of ketchup. Just stay with me…I won’t steer you wrong. Then mix it up. When the sugar and the beer combine it gets a bit frothy. The sauce calms down in a minute and looks like this. After a few flips, the pork was starting to get brown on both sides. Pour in the sauce and make sure the chops are coated. Bring it to a low boil and then reduce the heat and simmer for 40-45 minutes. About halfway through, I went ahead and started cooking up some rice. After the sauce is finished simmering it’ll look like this. Btw, I can’t wait until scratch and sniff computers are available…you know one day someone will make it happen. In the meantime, just know it smells so good! In a measuring cup, I whisked up 1/4 cup of water and 1 tablespoon of corn starch and made sure it was lump-free. Remove the chops from the sauce and bring the sauce to a boil. If I had 3 hands, you’d see the whole process, but just know that I slowly whisked in the corn starch and water mixture until there were no lumps. Add the pork chops back to the pan and flip them to make sure each side gets coated. Then serve this up. It’d be divine over mashed potatoes but was equally fabulous over rice. Be sure to spoon more sauce over the chop and rice as well and then dig in. This was way more tender than I expected it to be, and the flavor had almost a sweet and sour taste to it. I know that this is going to be one of my go-to pork chop recipes from now on. I can’t wait for you to make it. Happy simmering!

Ingredients:
1 tablespoon Olive Oil
5-6 pork chops- bone-in or boneless, your choice
Salt and pepper to taste
1 bottle of beer (The darker beer the better. I used Sam Adams Octoberfest. I would not recommend going as dark as a Guinness though.)
1/2 cup brown sugar
1/3 cup ketchup (I know, I know….but TRUST ME!)
1 tablespoon corn starch

Preparation Instructions:
1. Put a little bit of extra virgin olive oil in the bottom of a skillet. Season the chops with salt and pepper and brown both sides.

2. While pork chops are browning, combine beer, ketchup, and brown sugar in a bowl.

3. Pour sauce mixture over the pork chops and simmer for 40-45 minutes.

4. Remove pork chops and thicken the sauce a bit. In a small cup, combine 1 TBSP of cornstarch in 1/4 cup of water. Stir to combine and add to boiling sauce, whisk so no lumps form.

5. Put pork chops back in the thickened sauce, flip to coat. Serve over mashed potatoes or rice. Have your drink and eat it too!