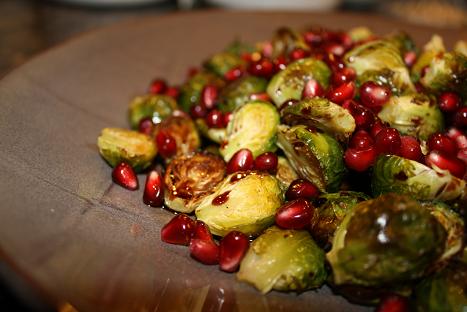 First thing I did was preheat the oven.  Then I began working with my Brussels sprouts, which I must say were a bit on the small size but all I could find in the store.  They still worked well though.  I began by trimming off the end of the sprout, pulling off any outside leaves that were falling off of the veggie.  When I was done doing this with all the sprouts, I rinsed them in a colander and then cut each one in half as you can see in the photo above. I then combined about a 1/4 cup of olive oil, some kosher salt and freshly ground pepper with the halved brussel sprouts and tossed them in a bowl with my hands until they were well coated.  I then got a cookie sheet with an edge all the way around it and placed a Silpat on top of the cookie sheet. Then I poured the brussel sprouts on the Silpat and spread them out evenly. I put the sprouts in the oven and began working on the glaze.  I combined the juice, balsamic vinegar, and sugar in a saucepan and turned it on medium high heat to bring it to a slow boil and stirred it regularly for about 25 minutes. After ten minutes, I opened the oven and stirred the sprouts around. I took them out of the oven after an additional ten minutes and they were browning with a few brown browned leaves. After the glaze had been on the stove for 25 minutes, I took it off the heat and let it cool.Finally I assembed the ingredients by putting the brussel sprouts in a dish, sprinkled them with pomegranate arils and spooned about 2 T. of glaze over them.  I sprinkled a bit of kosher salt over the top.  This would be a great side dish with just about any meal! Preparation Instructions:
1. Clean and cut the sprouts in half and place in a large bowl.

2. Toss with a fairly good amount of olive oil, coarse sea salt, and pepper to taste. Once evenly coated, place a single layer on a sheet pan or baking pan and roast at high heat 425 to 450 degrees until they start to get some color. It usually takes about 20–25 minutes depending on how crowded the pan is. Stir them about half way through, about 10-15 minutes into the cooking process. Take them out once they begin to get brown and some of the leaves get crispy. They should be tender but have some texture to them.

3. While the sprouts are cooking, begin to make the Pomegranate Balsamic Glaze.  Mix the pomegranate juice, balsamic vinegar and sugar, bring to a slow boil, and cook until the sauce is reduced by 2/3, stirring frequently. This takes about 15–25 minutes. Once it cools it will become thick and coat a spoon.

4. When the sprouts are finished, sprinkle with the pomegranate seeds and drizzle with about 2 tablespoons of glaze (or more, to taste) and serve warm.

5. I like to sprinkle the finished dish with a touch of coarse salt just to give it a bit of salty crunch.