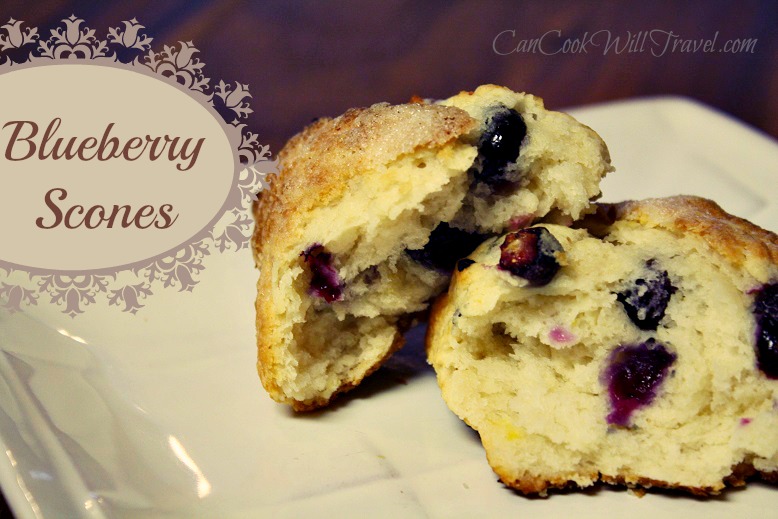 So I realized 2 things this week: 1) I really like scones; 2) I haven’t made any in a while. I realized with me leaving town this week that I had a plethora of blueberries and needed to find something to do with them. Then I got to wondering if I could make scones with fresh blueberries…enter in these Blueberry Scones. I went straight to the one source that I just knew would have a great recipe if it existed…America’s Test Kitchen. This is a great site and provides awesome programming to show a recipe that is the result of a ton of different tests. So when I found their Blueberry Scone recipe I looked no further.

There were some interesting things going on when I actually started to look at the recipe. First off, the blueberries are frozen, and the butter is grated and frozen to keep it as cold as possible. So that was the whole idea when baking these sweet treats…at every step of the process be sure your ingredients are as cold as possible.

Second, the dough was handled very carefully, and was folded a few times to allow it to be very flaky and like a puff pastry. So you bring the dough together, then roll it into a 12-inch square. The dough is then folded in 3 segments like a letter, and then it is folded 3 ways again, making it about a 4-inch square. Then the dough is popped into the freezer for 5 minutes. Again this was to keep the dough as cold as possible during the process.

Third, the frozen blueberries are pulled out of the freezer and spread across the square of dough and pressed in a bit. Then you roll the dough like a cinnamon roll. It’s pretty darned cool, and I’ve made several scones recipes and I was so intrigued by the process and how different it was from past scones I made. The point of freezing the blueberries is to prevent them from releasing their juices and turning the dough blue. The idea behind rolling the dough like a cinnamon roll is to get the blueberries throughout the scones. This is just such a cool recipe, and the end result was insanely good. Nice and sweet with a good amount of butter, plus the blueberries burst in your mouth a bit as you eat them, so it’s basically like having jam in the scones. Plus the crust was caramelized and delicious.

I totally understand now how America’s Test Kitchen got to the final product with this recipe. Thank goodness there are people to work out all the kinks. Oh and with me leaving, I didn’t need 8 scones, so I froze some of my un-baked scones, so I am excited to try them out later on.

Trust me and click here for the recipe and step by step instructions…you and your family will definitely thank me!

A look back:
One year ago: Crab Rangoon for Everyone!
Two years ago: Learning to Love Salads – Part 3: Basil Chicken Salad