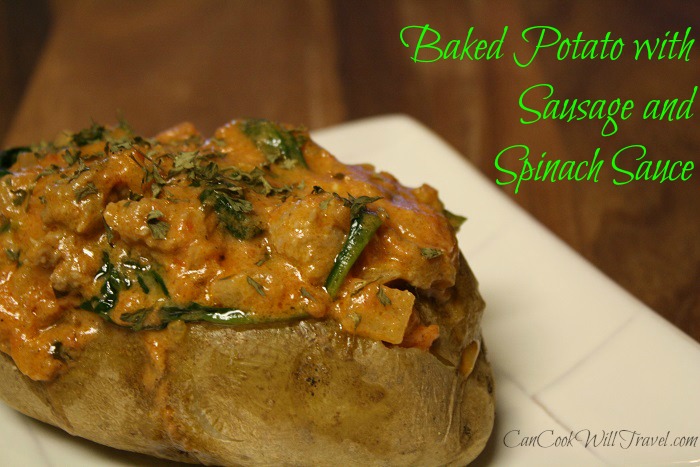 You are here: Home / Blog / Main Dishes / The Baked Potato Taken to a New Level

If you like Baked Potatoes, then this one topped with an awesome sauce is one to try! That’s right I said “awesome sauce,” but this sauce really was awesome. Here’s how I got to this dish…I knew I needed to make a Giada recipe this week, because her recipes are oh-so reliable and have never failed me. When I saw this Baked Potato dish, there was simply no looking back. Growing up baked potatoes often made an appearance at the dinner table. They are easy and we are definitely a meat and potatoes kind of family.

My world changed for lots of reasons after living in England several years ago…traveling, world experience, arts and culture, great friends, pubs, you get the drift. One of those changes was how I viewed baked potatoes, which previously were only for butter or salad dressing when I was feeling adventurous. But then the Brits came along…you see they call baked potatoes “jacket potatoes” (fancy, no?!) and I found them on many a pub menu. And my favorite is one that I will spare all of you lovely readers the pleasure of seeing/reading about…the Tuna Mayo Jacket Potato. Sounds strange but I love tuna and it just works…if you’re a tuna fan.

Okay, but enough about tuna…I wanted to make a meat and potatoes kind of jacket potato and Giada had the answer…Baked Potatoes with Sausage and Arugula Sauce. Well in my case I substituted Spinach for Arugula. Oh my this was so tasty. I used spicy turkey sausage and it gave enough flavor without being too spicy and was a fabulous complement to the sauce. This was a topping that could hold its own against a baked potato, which is a pretty substantial food on its own. Giada is so fabulous, I swear that woman is a culinary genius…her flavor combos are amazing! I made a meal out of this baked potato and was completely satisfied. The sauce is made by cooking some onions, then adding the sausage and browning it, and next goes marinara and fresh spinach (or arugula), and then finish it with some Mascarpone cheese and freshly grated Parmesan. Then top your baked potato with this officially named Awesome Sauce. I mean, wow, this was fabulous and it may just top the Tuna Mayo Jacket Potato, which I really didn’t think was possible.

Be sure to click here to check out the recipe and step by step photos. Seriously thank goodness for leftovers!

A look back:
One year ago: Banana Bread…The Only Option
Two years ago: My New Favorite Soup…Chicken Tortilla Soup