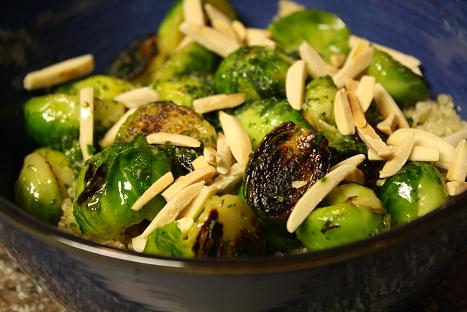 (Recipe can be found on the 101 Cookbooks site here.) This recipe is super easy to make and only requires a few of ingredients: about 24 small brussels sprouts (I used a few more, because I wanted more leftovers), Extra-Virgin Olive Oil, Toasted Slivered Almonds, 1/4 cup of Flat-Leaf Parsley, 1/4 cup fresh Oregano, Salt, and 1 Garlic Clove. I began washing the Brussels sprouts. Then I trimmed off a bit of the stem and removed the loose outer leaves. Finally, I cut each sprout in half lengthwise as seen in the photo above. They are so darned cute! The Brussels sprout halves were then placed in a bowl and tossed with a a small glug of olive oil until they were coated. Then I set the bowl aside and turned to the Oregano Drizzle. To make the oregano pesto drizzle, combine 3/4 cup of olive oil, the parsley, oregano, 1/4 teaspoon of salt, and 1 garlic clove in a food processor… …and process until the herbs are in small bits. Taste and add more salt, if needed. I then heated 1 tablespoon of olive oil over medium heat (about the 4 or 5 setting for my stove). Then I placed the Brussels sprouts with the cut side down and added a pinch of salt to them. The pan is then covered and I let the sprouts cook for 5 minutes until they were lightly browned. Once the cut side was lightly browned, I turned up the heat, and stirred the Brussels sprouts around so that they get a deeper brown and caramelize a bit. You’ll want to be sure to flip them so the curved side get caramelized a bit as well. Once they were finished cooking, I poured them back in the bowl they were in. I let mine caramelize, but I didn’t go too crazy with it. Then pour in some of the oregano pesto sauce (however much you want). I think I used about half of the sauce I made at this point. And tossed the Brussels sprouts until they are nicely coated with the sauce. I decided to serve mine over some quinoa I had cooked earlier. Then I drizzled a little more oregano pesto sauce over the top to flavor the quinoa a bit. Finally the dish is topped with toasted almonds, which you don’t want to forget. They add a fabulous crunch! I hope you enjoy this dish as much as I did – yum!! Preparation Instructions:
1. Wash the brussels sprouts well. Trim the stem ends and remove any raggy outer leaves. Cut in half from stem to top (quarter, if using larger sprouts) and gently rub each half with olive oil, keeping it intact. Or if you’re feeling lazy, just toss them in a bowl with a glug of olive oil.

2. Make the oregano drizzle by pulsing the olive oil, oregano, parsley, garlic, and salt in a food processor until the herbs are just little flecks of green. Season with more salt if needed, and set aside.

3. Just a few minutes before you’re ready to eat, heat 1 tablespoon of olive oil in your largest skillet over medium heat. Don’t overheat the skillet, or the outsides of the brussels sprouts will cook too quickly. Place the sprouts in the pan flat side down (single-layer), sprinkle with a couple pinches of salt, cover, and cook for roughly 5 minutes; the bottoms of the sprouts should only show a hint of browning. Cut into or taste one of the sprouts to gauge whether they’re tender throughout. If not, cover and cook for a few more minutes.

4. Once just tender, uncover, turn up the heat, and cook until the flat sides are deep brown and caramelized. Use a metal spatula to toss them once or twice to get some browning on the rounded side. Remove from heat and drizzle and toss with as much (or little) oregano pesto as you like. Season to taste, and serve sprinkled generously with the almonds as soon as possible. They really are best straight from the stove top.

Heidi’s Note: To make a meal of this, serve over farro, quinoa, rice, or on top of a frittata. Use leftover oregano drizzle over everything from roasted squash, frittatas, baked potatoes, or with a good amount of fresh lemon juice, as a salad vinaigrette.